A recent study performed by the authors and their colleagues reported company perspectives for a sample of 967 early intervention providers recruited throughout the United States. As a group, these service providers disagreed with declarations of beliefs explained in the literature as potential aspects limiting AT usage in early intervention. More particularly, they did not think that problems with funding, a need for a kid to have prerequisite abilities, or the risk that AT would inhibit acquisition of typical skills were barriers to AT usage.

The primary function of today examination was to perform a follow-up study with these suppliers to (a) gain further insight into how they make choices about AT and (b) take a look at possible relationships between their reported decision-making practices and their beliefs reported in the original survey. In the follow-up survey, service providers were asked to make choices about using intervention techniques, including AT, with babies and young children of specific ages in particularly explained situations.

Making choices is a main part of the work of any manager and generally is part of the work of workers at every level of the company. In an ideal-typical Weberian administration, decision makers pursue clear objectives by exercising their perfect rationality. Later on scholars, significantly Simon, have actually raised doubts about the attainability of best rationality, even by the best-intentioned supervisors. Others have stressed the political nature of much of the decision-making process in organizations. This post is not a lot concerned with variances from best rationality, politically motivated or not.

Rather, we will concentrate on the characteristics of the choices themselves and the locus within the company in which specific kinds of choices are made, with the goal of examining the vital distinctions between organized and clinical management more closely. In pre-modern business, the owner-manager had little need to validate his/her decisions to others and for that reason little need to make explicit the requirements on which the choices rested. With the divorce between ownership and management and the increase of middle management, the scenario needed to change dramatically.

Considered in this context, systematic management can be seen as an attempt to systematize the process of decision making. This meant that the criteria in relation to which the decision maker was held accountable, and on which his or her decisions were based, were as much as possible made explicit, objective and, if applicable, quantitative. Moreover, these criteria were framed in relation to other criteria used in the same organization. This allows, in the ideal case, to optimize the efficiency of the organization as a whole.

Secondary criteria may have to do with work speed, levels of accuracy, and so forth. At some level of an organization, decisions are taken on the basis of secondary rather than primary criteria. This level can be lower or higher. Strategic decisions are normally decisions of the first type. Decisions about specific operating procedures usually are decisions of the second type. 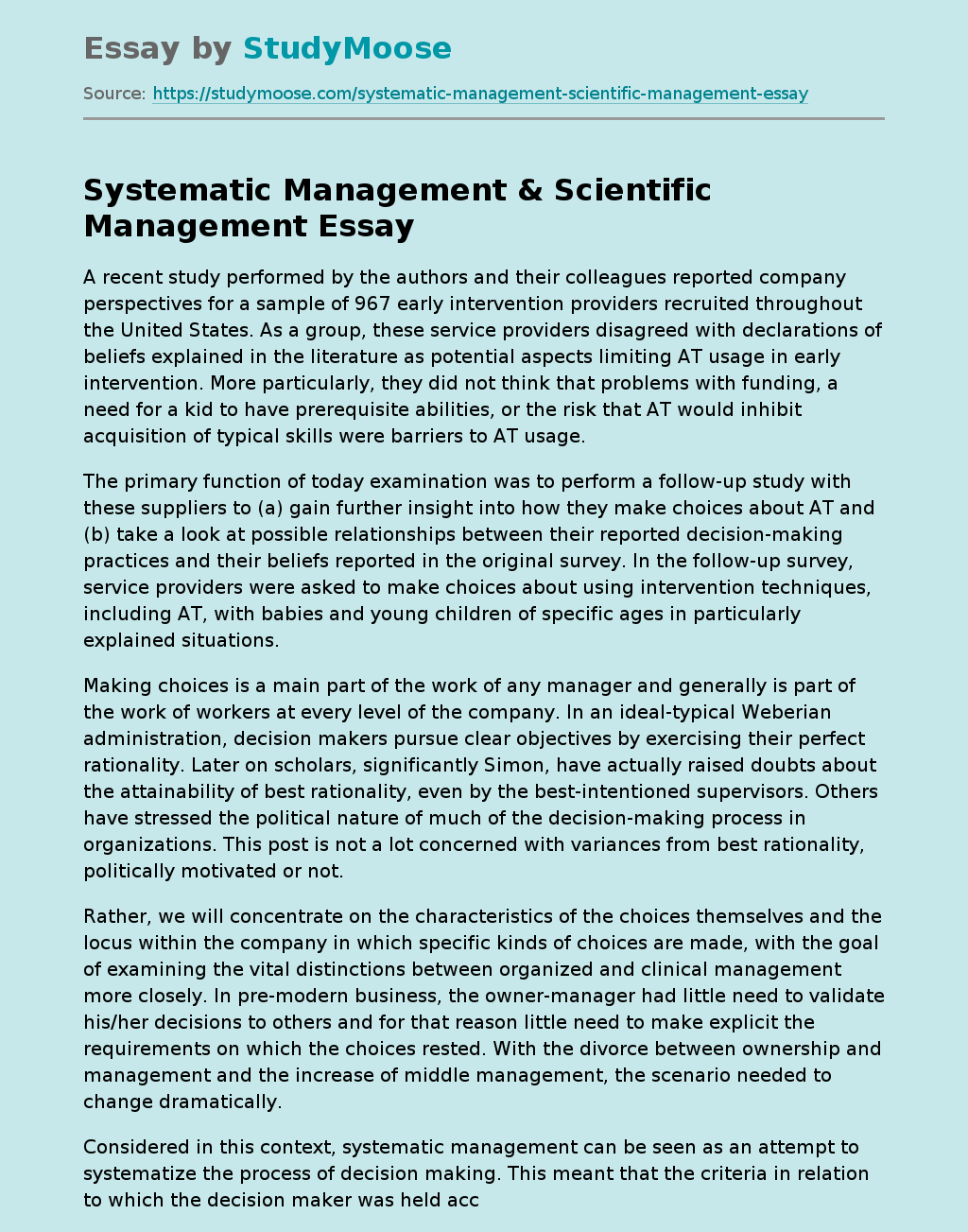