War is the horrible, the most cruel activity of man. It is nothing but mass murder. The evolution of human society towards something better has always been under wars. Millions of dollars are spend every year for deadly weapons of war. Human nature hates cruelty although some people believe that humans must shed blood to satisfy their blood thirsty nature. But is it so the case? Wars have been fought for a lot of reasons. But the Syrian one is the worst, civil war.

Don't use plagiarized sources.
Get Your Custom Essay on Syrian Civil War Just from $13,9/Page

Usually wars are fought over religion differences, natural sources, etc. But in the case of Syria its own people fight because of the government.

This war is still continued today, between loyal forces to the Syrian Ba’ath Party and those who are against it. It all started on March 15th, 2011. Protestants of the Middle Eastern protest movement known as the Arab Spring demanded the Syrian President, Bashar al-Assad to resign as they wanted to end the four decade Ba’ath Party rule.

It is supposed to be a presidential republic rule, in which all executive powers rests with the president. Although, in reality is a Saddam Hussein-style presidential dictatorship. In April of the same year the Syrian Army was ordered to open fire against the protestors.

The war continued and after a while they were acquired with weapons, all opposition forces even civilians unified into larger groups. Despite the unify, no leadership was organized. The government considers them terrorists. Unfortunately, many conflicts have been reported all over the country, in which many innocents are killed. Many countries including United States condemn the use of violence from the government. Even though the war had not reached the cities of Damascus and Aleppo, unfortunately in late 2011 suicide bombings caused the Hezbollah, a Shi’a Islamic militant group, to enter the war and support the army of Syria.

In the new year, 2013 the war’s death toll had exceeded the 60. 000, still increasing, and over 30. 000 have been reported missing. In addition, many Syrians immigrate to neighbor countries, mainly Turkey, causing a lot of problems. Others have been imprisoned encountering a lot of violence. The cause was not only the one in 2011, everything started long time ago. Hafez al-Assad scorched a policy which massacred thousands. Even more, the government forces tried to crack down a Kurdish uprising which demanded rights. Nothing ever happened. Instead, dozens were killed again.

The opposition continued in 2005, leading to the delivery of Damascus Declaration, criticizing government ruled and asked for democratic reforms. Regarding the Human in rights in Syria, Bashar Al-Assad is widely considered to have been unsuccessful applying a democratic change. The greatest irony is that all the other political parties are banned. Therefore, leaving the Bashar’s party itself to rule without free elections. Furthermore, even before the war, human rights such as those of free expression, etc were controlled by the government. Finally, women and Kurdish faced discrimination.

They were denied citizenship until 2011 and occasional clashes between Kurdish and security forces happen after a conflict in a soccer match, in 2004. The uprising began on 15 March in Aleppo and in the city of Daraa. They were triggered by the torture of some young students as they painted anti-government grafitti. The first conflict was reported on March 18 and two days later several official buildings were burned down. Security forces without hesitation opened fire in civilians. Clashes continued in the next two months, the Syrian government offered political reforms, policy changes and announced many other things but never applied.

Many other conflicts continued since then and still ongoing. Finally, Syria has been accused of having chemical weapons by other countries and threatened, in case of using them. To sum up, the point of the project is to show what a catastrophe a dictatorship can cause which is very similar to what we are studying ,absolute monarchy. Many people have died for the sake of justice, people have lost their homes, cities have been completed destructed. In my opinion, this war is very tragic and nobody does anything to save those people and all of that for power. Absolute monarchs have caused a lot of wars, deaths but never in that scale. 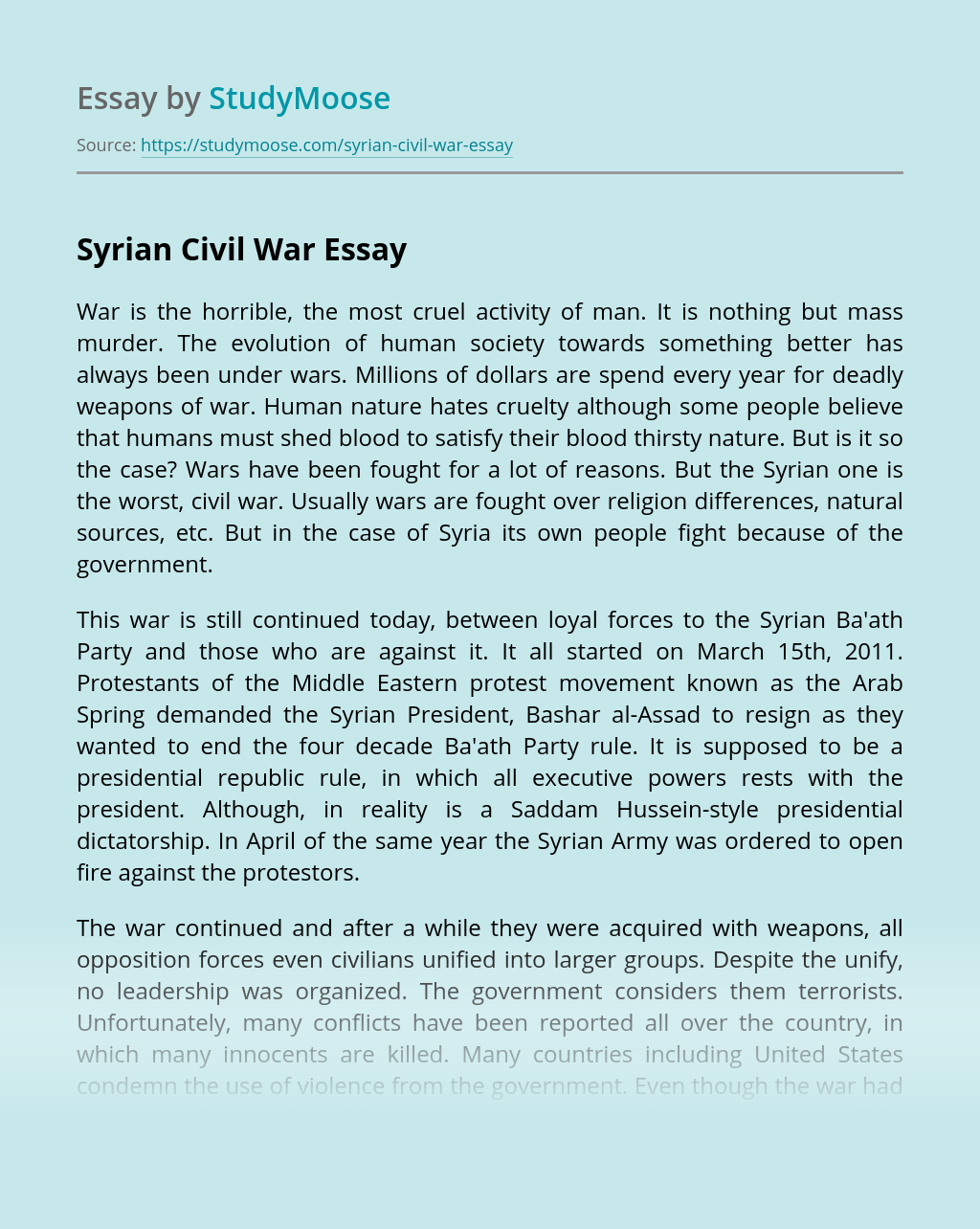 War is the horrible, the most cruel activity of man. It is nothing but mass murder. The evolution of human society towards something better has always been under wars. Millions of dollars are spend every year for deadly weapons of war. Human nature hates cruelty although some people believe that humans must shed blood to...