Synthetic fibers are made from synthesized polymers or small molecules. The compounds that are used to make these fibers come from raw materials such as petroleum based chemicals or petrochemicals. These materials are polymerized into a long, linear chemical that bond two adjacent carbon atoms. Differing chemical compounds will be used to produce different types of fibers. Although there are several different synthetic fibers, they generally have the same common properties. Generally, they are known for being: Heat-sensitive

Don't use plagiarized sources. Get your custom essay on
“ Synthetic Fibres ”
Get custom paper
NEW! smart matching with writer

Before synthetic fibers were developed, artificially manufactured fibers were made from cellulose, which comes from plants. These fibers are called cellulose fibers.

Advantages
Synthetic fibers do not depend either on an agricultural crop or on animal farming. They are generally cheaper than natural fiber. Synthetic fibers possess unique characteristics which make them popular dress material.

They dry up quickly, are durable, readily available and easy to maintain. More stain resistant than natural fibres

Disadvantages
Synthetic fibers burn more readily than natural
Prone to heat damage, they melt relatively easily
Prone to damage by hot washing
More electrostatic charge is generated by rubbing than with natural fibres There are several methods of manufacturing synthetic fibers but the most common is the Melt-Spinning Process. It involves heating the fiber until it begins to melt, then you must draw out the melt with tweezers as quickly as possible.

The next step would be to draw the molecules by aligning them in a parallel arrangement. This brings the fibers closer together and allows them to crystallize and orient. Lastly, is Heat-Setting. This utilizes heat to permeate the shape/dimensions of the fabrics made from heat-sensitive fibers. Synthetic fibers account for about half of all fiber usage, with applications in every field of fiber and textile technology.

Although many classes of fiber based on synthetic polymers have been evaluated as potentially valuable commercial products, four of them – nylon, polyester, acrylic and polyolefin – dominate the market. These four account for approximately 98 percent by volume of synthetic fiber production, with polyester alone accounting for around 60 per cent.[1] The first artificial fiber, known as artificial silk, became known as viscose around 1894, and finally rayon in 1924. A similar product known as cellulose acetate was discovered in 1865. Rayon and acetate are both artificial fibers, but not truly synthetic, being made from wood. Although these artificial fibers were discovered in the mid-nineteenth century, successful modern manufacture began much later (see the dates below). Nylon, the first synthetic fiber, made its debut in the United States as a replacement for silk, just in time for World War II rationing. Its novel use as a material for women’s stockings overshadowed more practical uses, such as a replacement for the silk in parachutes and other military uses.

Nylon (1931)
Modacrylic (1949)
Olefin (1949)
Acrylic (1950)
Polyester (1953)
Carbon fiber (1958)
Specialty synthetic fibers include:
Vinyon (1939)
Saran (1941)
Spandex (1959)
Vinalon (1939)
Aramids (1961) – known as Nomex, Kevlar and Twaron
Modal (1960’s)
Dyneema/Spectra (1979)
PBI (Polybenzimidazole fiber) (1983)
Sulfar (1983)
Lyocell (1992) (artificial, not synthetic)
PLA (2002)
M-5 (PIPD fiber)
Orlon
Zylon (PBO fiber)
Vectran (TLCP fiber) made from Vectra LCP polymer
Derclon used in manufacture of rugs
Rayon artificial silk
Other synthetic materials used in fibers include:
Acrylonitrile rubber (1930)
Modern fibers that are made from older artificial materials include: Glass fiber (1938) is used for:
industrial, automotive, and home insulation (glass wool)
reinforcement of composite materials (glass-reinforced plastic, glass fiber reinforced concrete) specialty papers in battery separators and filtration
Metallic fiber (1946) is used for:
adding metallic properties to clothing for the purpose of fashion (usually made with composite plastic and metal foils) elimination and prevention of static charge build-up
conducting electricity to transmit information
conduction of heat
Modal is a type of rayon,[1] a semi-synthetic cellulose fiber made by spinning reconstituted cellulose, in this case often from beech trees. Modal is used alone or with other fibers (often cotton or spandex) in household items such as pajamas, towels, bathrobes, underwear and bedsheets. Nylon is a generic designation for a family of synthetic polymers known generically as aliphatic polyamides, first produced on February 28, 1935, by Wallace Carothers at DuPont’s research facility at the DuPont Experimental Station. Nylon is one of the most commonly used polymers. Acrylic fibers are synthetic fibers made from a polymer (polyacrylonitrile) with an average molecular weight of ~100,000, about 1900 monomer units. To be called acrylic in the U.S, the polymer must contain at least 85% acrylonitrile monomer. Typical comonomers are vinyl acetate or methyl acrylate. DuPont created the first acrylic fibers in 1941 and trademarked them under the name Orlon.

Acrylic is also called acrilan fabric. As it resembles silk, it is also called artificial silk.[ Polyester is a category of polymers which contain the ester functional group in their main chain. Although there are many polyesters, the term “polyester” as a specific material most commonly refers to polyethylene terephthalate (PET). Polyesters include naturally occurring chemicals, such as in the cutin of plant cuticles, as well as synthetics through step-growth polymerization such as polycarbonate and polybutyrate. Natural polyesters and a few synthetic ones are biodegradable, but most synthetic polyesters are not. Fabrics woven or knitted from polyester thread or yarn are used extensively in apparel and home furnishings, from shirts and pants to jackets and hats, bed sheets, blankets, upholstered furniture and computer mouse mats. Industrial polyester fibers, yarns and ropes are used in tyre reinforcements, fabrics for conveyor belts, safety belts, coated fabrics and plastic reinforcements with high-energy absorption. Polyester fiber is used as cushioning and insulating material in pillows, comforters and upholstery padding. Spandex or elastane is a synthetic fiber known for its exceptional elasticity. It is strong, but less durable than its major non-synthetic competitor, natural latex. It is a polyurethane-polyurea copolymer that was invented in 1959 by chemists C. L. Sandquist and Joseph Shivers at DuPont’s Benger Laboratory in Waynesboro, Virginia.

When first introduced, it revolutionized many areas of the clothing industry. The name “spandex” is an anagram of the word “expands”.[1] It is the preferred name in North America; in continental Europe it is referred to by variants of “elastane”, Rayon is a manufactured regenerated cellulose fiber. It is made from purified cellulose, primarily from wood pulp, which is chemically converted into a soluble compound. It is then dissolved and forced through a spinneret to produce filaments which are chemically solidified, resulting in synthetic fibers of nearly pure cellulose.[1] Because rayon is manufactured from naturally occurring polymers, it is considered a semi-synthetic fiber.[ Carbon-fiber-reinforced polymer, carbon-fiber-reinforced plastic or carbon-fiber reinforced thermoplastic (CFRP, CRP, CFRTP or often simply carbon fiber, or even carbon), is an extremely strong and light fiber-reinforced polymer which contains carbon fibers. Although carbon fiber can be relatively expensive, it has many applications in aerospace and automotive fields, such as Formula One racing.

Lyocell is a regenerated cellulose fiber made from dissolving pulp (bleached wood pulp). It was developed and first manufactured for market development as Tencel[1] in the 1980s by Courtaulds Fibres in Coventry UK and at the Grimsby UK pilot plant codenamed S25. It shares many properties with other cellulosic fibers such as cotton, linen, ramie and rayon. Some main characteristics of lyocell fibers are that they are soft, absorbent, very strong when wet or dry, and resistant to wrinkles; lyocell fabric can be machine- or hand-washed or drycleaned, it drapes well, and it can be dyed many colors, and can simulate a variety of textures such as suede, leather, and silk.[4] Olefin fiber is a synthetic fiber made from a polyolefin, such as polypropylene or polyethylene. It is used in wallpaper, ropes, and vehicle interiors. Olefin’s advantages are its strength, colourfastness and comfort, its resistance to staining, mildew, abrasion, sunlight and its good bulk and cover. 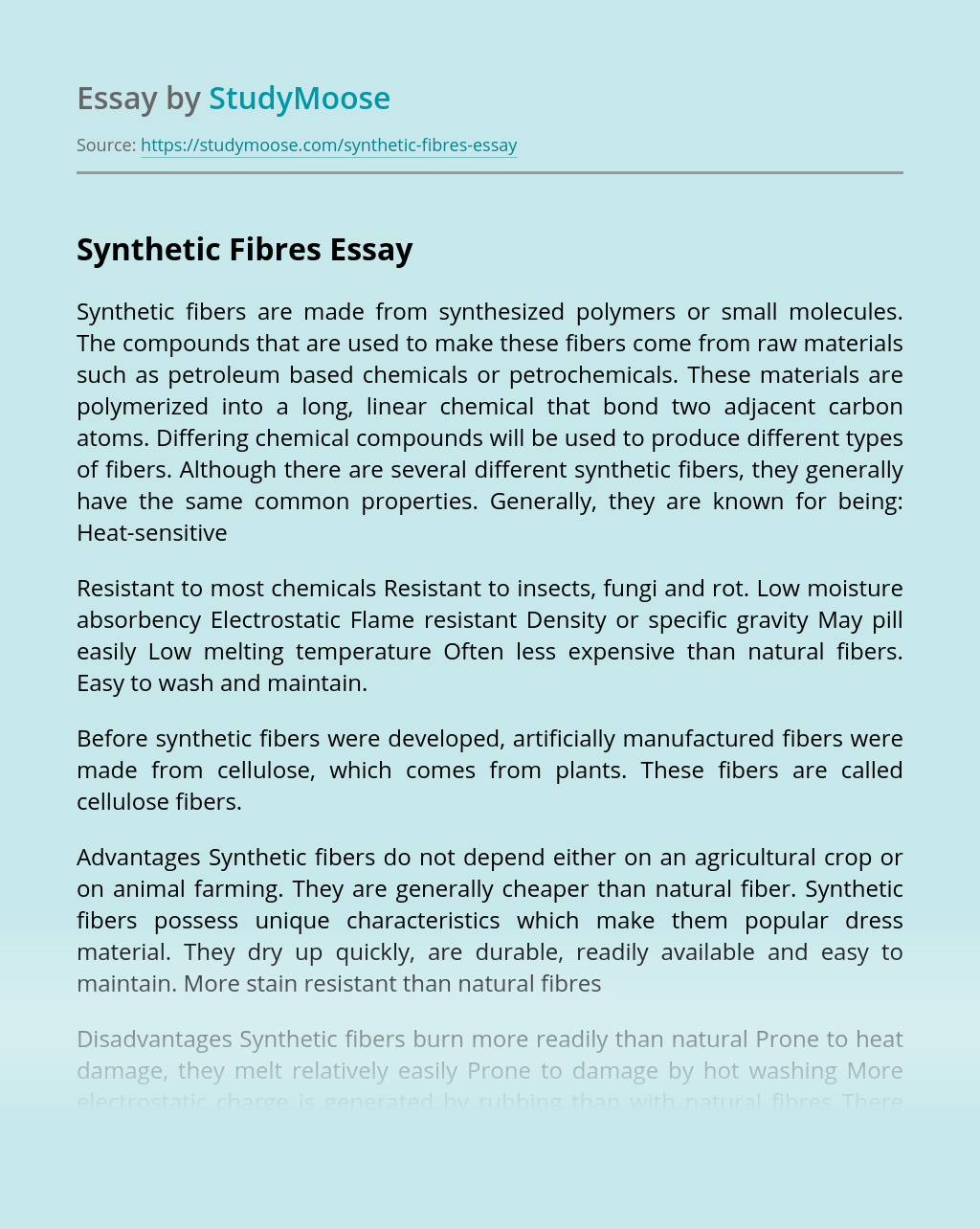