What Does It Really Mean to Be Feminine?

What does it really mean to be a man or a woman? Masculine or feminine? Different cultures and communities have assigned certain characteristics and attributes which define each sex. But do these traits describe every man and woman’s behavior? Individuals should have the free will to act in any way they wish to, whether in favor of society measures or in favor of their own conscience.

Throughout the course of history, men have been viewed and perceived to be chivalrous, audacious, dauntless, and despotic.

Don't use plagiarized sources. Get your custom essay on
“ What Does It Really Mean to Be Feminine? ”
Get custom paper
NEW! smart matching with writer

Women however, have been depicted as weak emotional subordinates who obey their man’s orders mindlessly. David’s portrait shows a father proudly giving his three sons swords for battle, while in the background we can see the women weeping helplessly.

Read more: How to write a good ap synthesis essay.

The Tsu-busu tribe in Africa is known for their boldness, bravery, and “masculinity”. As soon as a teenage boy in the tribe hit puberty, his parents hold a whip-slashing ceremony where the men of the tribe gather to whip the half naked boy until they bleed heavily.

If the young man moves or screams for help, they do not consider him a man. Is this how men should be treated? The twenty-first century man doesn’t necessarily have to possess these virtues.

Why should only women be allowed to display emotions and not men? Shakespeare once wrote, “Those waters from me which I would have stopped; But I had not so much of man in me.

” It is lucid from this extract that it was dishonorable for men at that time to weep and exhibit their emotions. However, as time progresses, previously set standards fade away gradually. It is more acceptable nowadays for a man to weep in public, as in the funeral of a loved one for instance.

What does it really mean to be feminine? With the sheer abundance of feminists nowadays, this has become a very controversial topic. A woman doesn’t have to follow certain standards and rules to be classified as a woman. Sexism has decreased to a great extent this century, but women are still not satisfied. They claim that they want to be treated as equals and at the same time want to be treated differently as how “women should be treated.” E.g. the ladies first invite. Some people propose that the ideal woman should be anorexic-thin, small, submissive.

However, these are just gender roles set up by society and do not necessarily set the bar up for woman to follow. Why is it more acceptable if a fat clumsy man has a fit and beautiful female partner, while a handsome man having an obese average-looking partner is viewed as taboo? Remarkably, Angelou says in her poem, “Pretty women wonder where my secret lies. I’m not cute or built to suit a fashion model’s size. But when I start to tell them they think I’m telling lies.” Angelou indicates that inner beauty can mask external body flaws and vice versa.

These superficial traits have been established by different cultures and societies, but should each woman seek to be like the ideal woman described beforehand, or can a woman live her life the way that pleases her, without social pressure affecting her. Can a man freely express his emotions without being referred to as “gay” by his peers? As civilization progresses, social acceptance rates increase and stereotypes fade away. Do you think there will ever be a time where one can truly live a free life without social pressure pushing individuals to do things against their will?

What Does It Really Mean to Be Feminine?. (2016, Apr 27). Retrieved from https://studymoose.com/synthesis-essay-feminism-essay 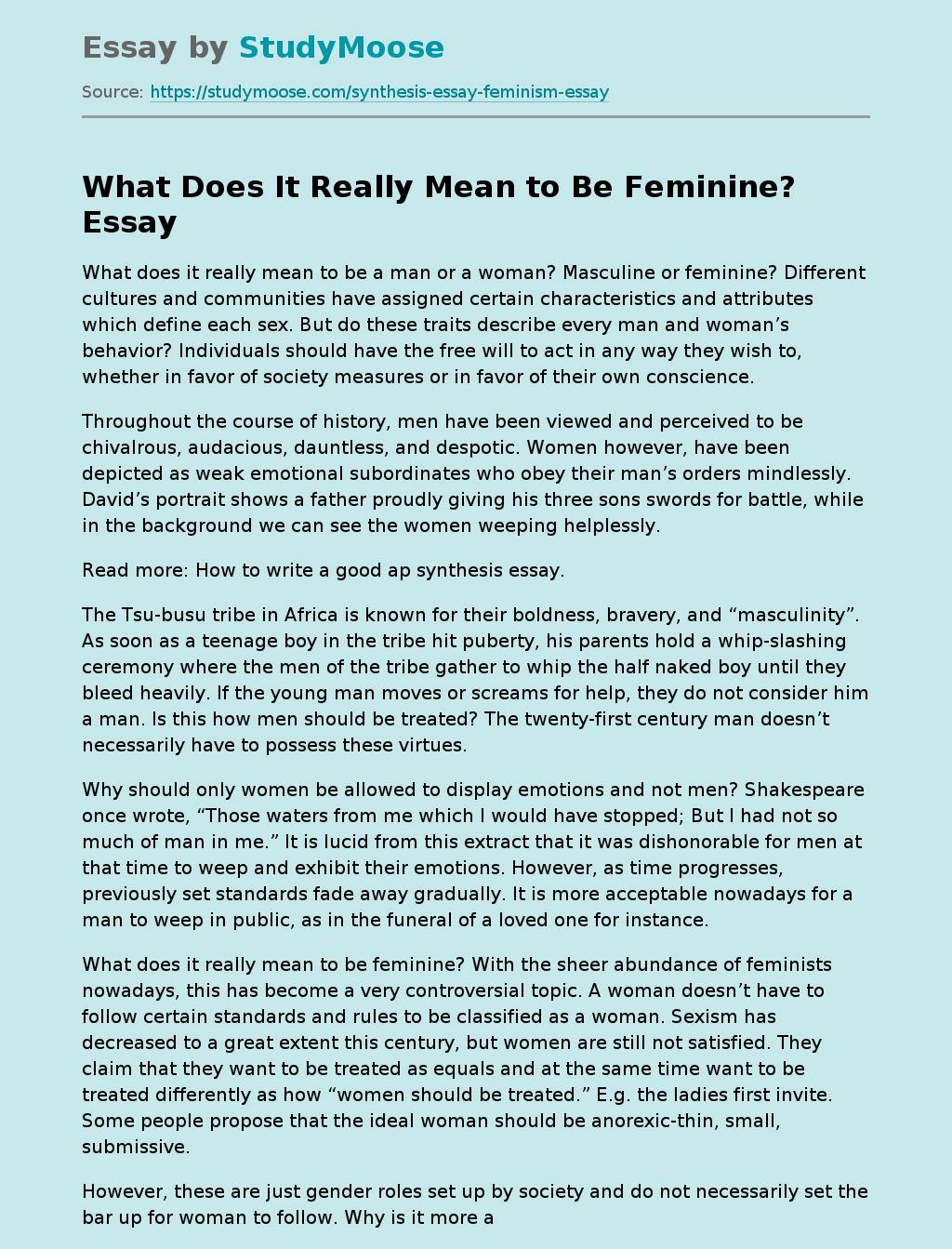