Symbolism in "To Kill A Mockingbird"

What is symbolism? What is the importance of symbolism? Why do we use symbolism in literature? Symbolism is the use of symbols to represent ideas and qualities, by giving them symbolic meanings that are different from their literal purpose. In literature, symbols can be items, characters, ideas, or even colors that are used to represent larger concepts. Authors often use symbolism to communicate deeper ideas or themes without having to state them. Symbols are often used to represent something of importance.

Don't use plagiarized sources. Get your custom essay on
“ Symbolism in “To Kill A Mockingbird” ”
Get custom paper
NEW! smart matching with writer

Today, one of the many universal symbols are four-leaf clovers which are said to stand for hope, faith, love, and luck. Another universal symbol is the peace symbol, which stands for peace, love, harmony, and overall good vibes. Symbols like the four-leaf clover and the peace symbol are everywhere and we often see many different symbols being used within novels. In the novel, To Kill A Mockingbird, the mockingbird itself, Tim Johnson (the mad dog), and the tree by the Radley House are significant symbols within the novel.

In the novel, To Kill A Mockingbird, perhaps the most significant symbol to talk about is the symbolism behind the mockingbird. The title is more than just a title, but is a symbol for what is to happen in the story. In chapter 10, Atticus goes on to say, “Shoot all the bluejays you want, if you can hit’em, but remember it’s a sin to kill a mockingbird” (Lee p. 119). Atticus says this to Jem and Scout after they get their air-rifles and it was the only time he said it was a sin to do something, which means that he really does not want his children to commit that sin.

In chapter 10, Miss Maudie says, “Mockingbirds don’t do one thing but make music for us to enjoy. They don’t eat up people’s gardens, don’t nest in corncribs, they don’t do one thing but sing their hearts out for us. That’s why it’s a sin to kill a mockingbird” (p. 119). Through this quote you can see that the mockingbird symbolizes innocence because mockingbirds only sing to us and do not do anything to try to harm us; instead they try to do good things. The mockingbird symbolizes innocence, so the title implies that innocence is being killed or destroyed. Throughout this novel, there are some characters who can be viewed as mockingbirds, such as Boo Radley. Boo Radley is like a mockingbird because he does not harm anyone; instead, he leaves presents for Scout and Jem, he covers Scout with a blanket during the fire, and then ends up saving the children from Bob Ewell and the other attackers. Boo has never done anything but be thoughtful and look out for the children, but he is very often misunderstood by the town. This means that he represents innocents who are damaged or destroyed by evil.

Tim Johnson was the property of Mr. Harry Johnson, he was like the pet of Maycomb. Tim was infected with rabies during the month of February which was really odd because dogs usually got infected with rabies near August. In chapter 10, Calpurnia says, “I know it’s February, Miss Eula May, but I know a mad dog when I see one” (p. 124). Through this quote you can see that even Calpurnia thought it was unusual to see a mad dog in February but was still very sure it was a mad dog. Atticus was told to shoot the mad dog because Mr. Heck Tate said he could not shoot that well. Atticus did not want to shoot the dog but ended up having to shoot him, the children learned that he was “One-Shot Finch”. Since Atticus had to shoot Tim, that means that he is fighting against the racism to get justice. It goes back to Tom Robinson, Tim and Tom probably have similar names for a reason, Atticus was chosen to defend Tom and that is what he did. Tim Johnson represents the mob, injustice, and anything Atticus has to fight.

Scout had started her first days of school and in order to get to school she had to pass by the Radley House. One day a knot-hole in the tree near the Radley House caught her attention and she found two pieces of gum inside the knot-hole. In chapter 4 it says, “… and withdrew two pieces of chewing gum minus their outer wrapper” (p. 44). This was the first time Scout had found something in the tree and she still took both pieces without knowing whose they were. From that day forward, she found little presents in the knot-hole, but then Mr. Radley filled in the knot-hole with cement. In chapter 7, Mr. Radley said, “Tree’s dying. You plug ’em with cement when they’re sick. You ought to know that, Jem” (p. 83). Mr. Radley’s reason for filling the knot-hole with cement was because the tree was dying but that was not true. Mr. Radley just did not want Boo to communicate with the children. The knot-hole in the tree was the only way for Boo to communicate with the children in a nice way, he was trying to be nice and giving so that the children wouldn’t be afraid of him. The knot-hole in the tree represents Jem and Scout’s friendship with Boo.

In conclusion, symbolism is important to include in literature. The mockingbird, the mad dog, and the tree by the Radley House are important symbols that are within the novel. The Mockingbird symbolizes innocence, so the title suggests that innocence is being killed or destroyed. There are many examples of mockingbirds in the novel, which is why this symbol is the most significant. Tim Johnson represents anything Atticus has to fight. Tim Johnson also associates with Tom Robinson. The tree near the Radley House represents Jem and Scout’s friendship with Boo. Overall, it is important to use and understand the symbolism because that way you will comprehend deeper ideas or themes within the literature.

Symbolism in "To Kill A Mockingbird". (2021, Aug 16). Retrieved from https://studymoose.com/symbolism-in-to-kill-a-mockingbird-essay 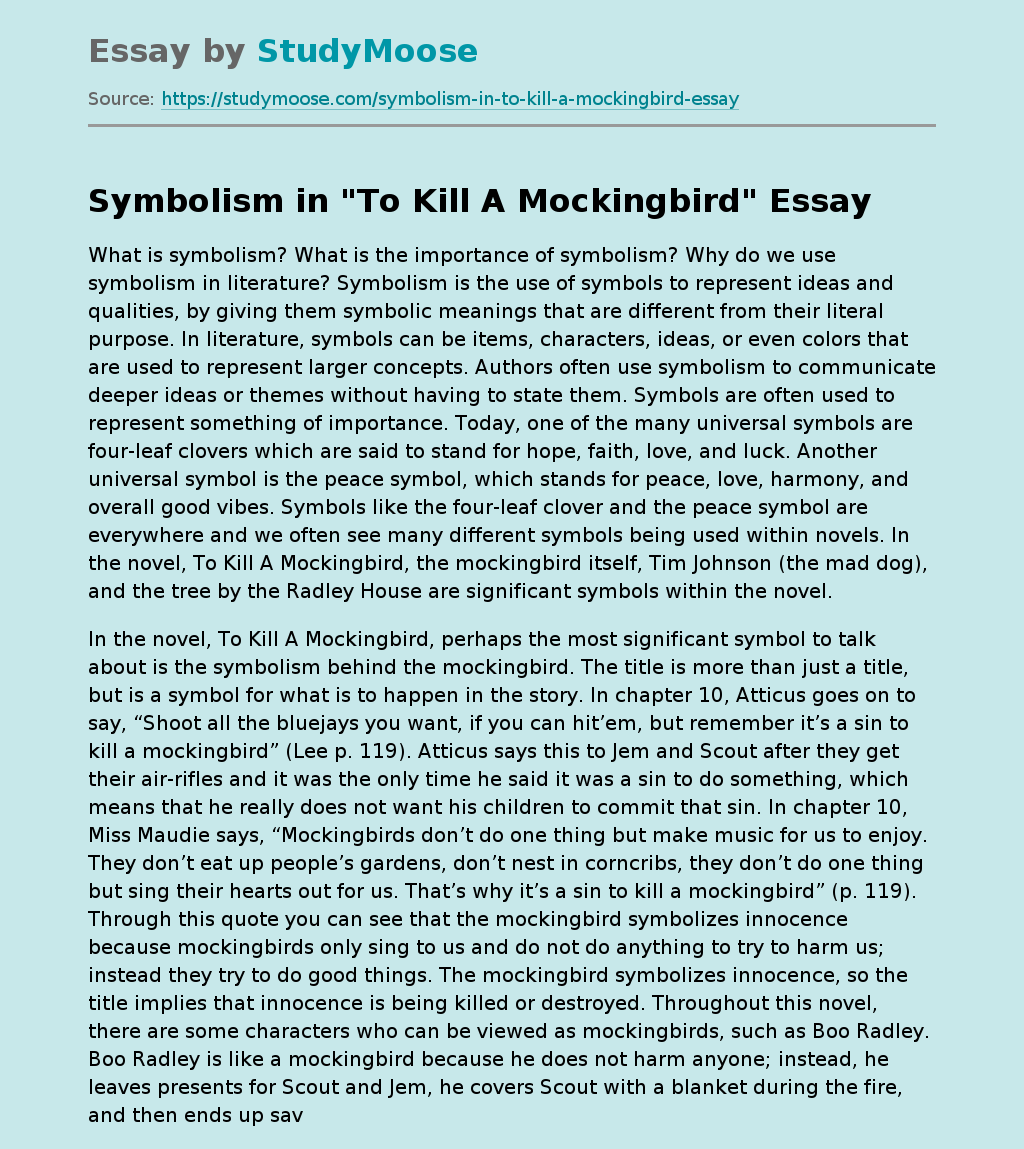