Symbolism in Their Eyes Were Watching God

Nothing can dim the light that shines from within Maya Angelou. In their eyes were watching god Zora Neale Hurston uses different types of symbolism such as her hair, the mule, and the pear tree to setup the overall theme, and show off Janie’s true colors as the independent woman that she is. Having to all of a sudden changed from a child to an adult at the age of sixteen. The story shows Janie’s inner struggle to find her own voice and realize her dreams through three unsuccessful marriages and a lifetime of hardships that comes from being a black woman in America in the early 20th century.

Don't use plagiarized sources. Get your custom essay on
“ Symbolism in Their Eyes Were Watching God ”
Get custom paper
NEW! smart matching with writer

Surprisingly no matter how much hardship she has been through Janie continues to shine. Janie’s hair being one of the most important symbols in the novel symbols her strength and her identity. This business of the head-rag irked her endlessly.

But Jody was set on it. Her hair was NOT going to show in the store.

It didn’t seem sensible at all. That was because Joe never told Janie how jealous he was. He never told her how often he had seen the other men figuratively wallowing in it as she went about things in the store. And one night he had caught Walter standing behind and brushing the back of his hand back and forth across the loose end of her braid ever so lightly so as to enjoy the feel of it without Janie knowing what he was doing.

Joe was at the back of the store and Walter didn’t see him. He felt like rushing forth with the meat knife and chopping off the offending hand. That night he ordered Janie to tie up her hair around the store. That was all. She was there in the store for him to look at, not those others.

Beauty, which has always been a symbol of being different for Janie because of her mixed race, now works against her. Jealous Joe finds Janie’s beauty something to be concerned about, and forces her to hide it thinking it would takes the attention off his wife from other man. Joe’s obsession of Janie’s hair is one way of showing ownership; beauty like that is his alone and not to be touched or even seen by others. She tore off the handkerchief from her head and let down her plentiful hair. The weight, the length, the glory was there. (pg. 87) Another quote from the book this time showing Janie’s freedom from Joe’s abuse after years of being locked under Joe’s roof, Janie lets out her hair a special mark of her femininity and admires it. “The weight, the length, the glory” of it confirms that her womanhood is still undamaged, strong, and beautiful as ever. Her new built freedom is reflected in the return of confidence in her womanhood. From that point on, she kept her hair in a long braid that reached her waist and ignored the rumours. Janie being the mayor’s widow, the townspeople want to continue to put her in a box, but Janie wants more from life than to be Joe’s widow. What dat ole forty year ole ‘oman doin’ wid her hair swingin’ down her back lak some young gal? says one of the porch sitters. Janie no longer cares what people say or think about her she’s a free woman know.

Throughout the whole book janie refers to the horizon to new beginnings, a fresh start, or even the future and what it holds for her. At first Janie sees the horizon as an opportunity for something great to happen in her life. For example, in the beginning of the paragraph, it shows how harboring ships give people hope for the ships to be carrying cargo that they need the most. Ships at a distance have every man’s wish on board. For some they come in with the tide. For others they sail forever on the horizon, never out of sight When she meets and marries Joe Stark the horizon is compared to a fresh start. Janie pulled back a long time because he did not represent sun-up and pollen and blooming trees, but he spoke for far horizon.(pg. 29) Joe fascinates Janie because of his love for politics and his charm. She wants to start a new life with him and leave her past behind.

The mule being another important symbol in the novel symbolizes that women like Janie are treated badly, and that they are treated a little better than animals. The mule story relates to the bad relationship between Janie and Joe Starks. The figure of the mule can refer not only to Janie herself but to any black woman struggling for independence.When Janie was in her teenage years her grandmother made her marry a much older man by the name of Logan Killicks. One day Logan said, Ah needs two mules dis yeah (pg. 27). Logan then left to go to Lake City in order to buy a second mule where he would later use for farm work. This mule relates very to Janie because Logan later insults Janie for not helping him out enough on the farm, and then later tries to make her work like a mule. As a way to fix this problem between her and Logan, Janie leaves Logan for another man who she thinks would treat her better.The symbol of a mule is seen again during Janie’s marriage to Joe. Janie’s marriage leaves her owned not loved. Emotionally, Joe treats her like he’d kick a mule. When Janie tries to stands up for herself her marriage is ruined. During this time in her marriage a man in town, Matt Bonner, buys a mule that he works to death. Janie protests and so her husband, Joe, buys the mule from Matt. Again, the mule symbolizes Joe’s ownership of Janie. When the mule was in front of the store, Lum went out and tackled him.

The mule jerked up his head, laid back his ears and rushed to the attack. Lum ran for safety. Five or six more men left the porch and surrounded the angry beast, poking him in the sides and making him show his temper. He was soon panting and breathing for trying to spin his old mule. Everybody was having fun at the mule-baiting, except for Janie. when Joe tells Janie to get his shoes, after an argument She got up without a word and went off for the shoes. A little war of defense for helpless things was going on inside her. People ought to have some regard for helpless things. She wanted to fight about it. “But Ah hates disagreement and confusion, so Ah better not talk. It makes it hard tuh git along.”

Janie’s kindness for “helpless things” connects her helplessness as a victim of Joe to the mule’s helplessness as a beast of burden for Matt Bonner. The novel their eyes were watching god is a filled with important symbols. Janie crawford a confident middle aged black woman goes through life discovering her quest for spiritual understanding and self discovery. When Hurston gives her main character three husbands, and ending her novel with Janie alone and happy, she advises that happiness does not always involve one husband, one child and a settled basic life. She did not care about what other people think of her, she just wanted to live her own life. And by showing her journey to becoming an independent woman after all those years being ruled by men.

Symbolism in Their Eyes Were Watching God. (2019, Aug 20). Retrieved from https://studymoose.com/symbolism-in-their-eyes-were-watching-god-essay 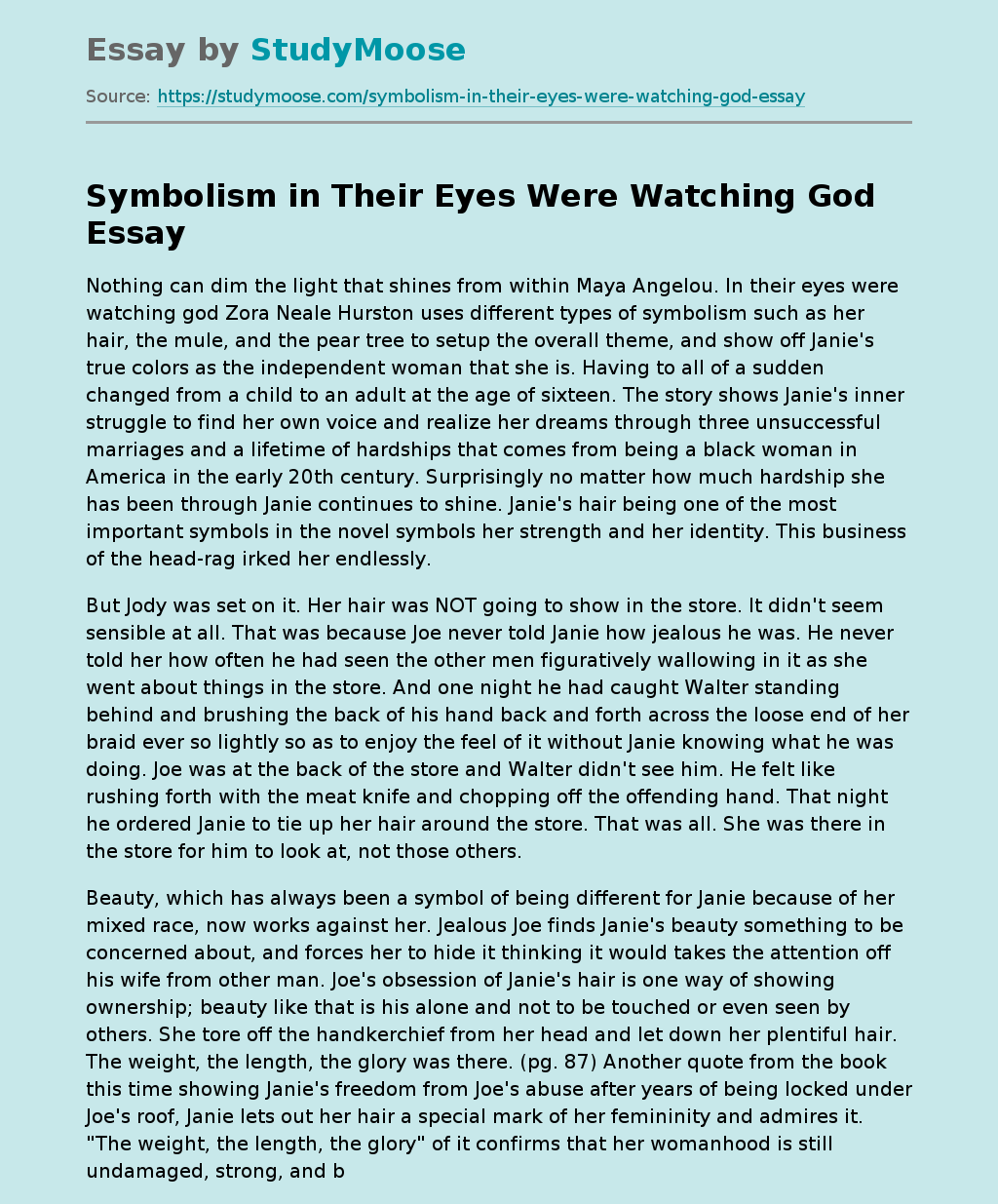