﻿Symbolism in The Jade Peony Essay

Symbolism is used in this story.

Don't use plagiarized sources.
Get Your Custom Essay on ﻿Symbolism in The Jade Peony Just from $13,9/Page

Such like the wind chimes, the jade peony and the cat. The most significant symbol in this story is the white cat, with its red eyes, that appears outside the house. This “cat” symbolizes that grandma’s time has come, and that she must move on to her next life where she will be reunited with “the juggler”. This cat bring backs memories and old feelings she had for her lover, and is therefore a significant symbol in this story. At the end of the story the cat revels that he is the symbol of grandma’s old lover. Grandma said that the cat’s eyes were pink, and the pink was also the color of her spirit. She thought the cat was sent by her old lover to take her back. The cat was also the symbol of death. After grandma saw the cat, she was already prepared to die and refused to go to the hospital, because she was a very traditional person, the cat was to bring her back, so there was no way to stop her from dying.

The symbolism also shows that the tradition of grandma.

Wind chime is a symbol of freedom for the family, who together searched to find the pieces to put it back together. It represents something that can be passed down through the generations and symbolizes their Chinese culture. For example, before grandma died, she and the author made a wind chime and grandma told the author that hang it on the window, so the family will know that when she is coming back and visit the family.

Grandmother treasured the jade peony, because she had lived the majority of her life in China and to her it would always be home. In addition, to the Chinese, the peony was regarded as a national flower. The same applied to jade that the historically prized was above gold and silver in Chinese’s mind. So grandmother might regard them as a symbolic reminder of their Chinese heritage and cultural roots.

﻿Symbolism in The Jade Peony. (2016, Mar 28). Retrieved from https://studymoose.com/symbolism-in-the-jade-peony-essay 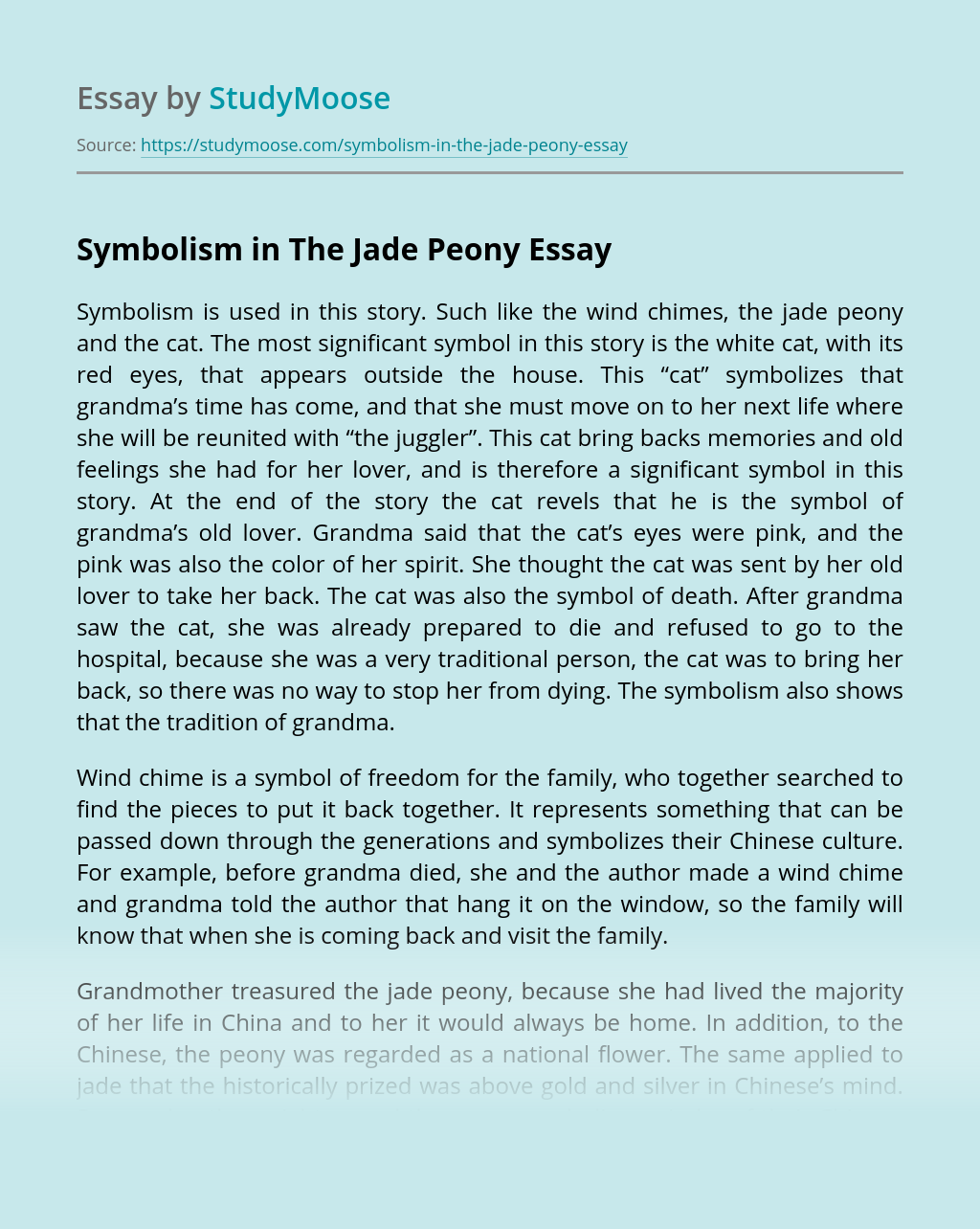 Beauty and the Beast Analysis

In August of 2009, Jaycee Lee Dugard was found alive after she had been abducted in 1991, and she was still with her original captor. Sources have stated that Dugard had developed a case of Stockholm syndrome with the man who kidnapped her eighteen years ago. A psychiatrist named Keith Ablow stated that “To maintain... VIEW ESSAY

Understanding the artwork of Andy Warhol is something akin to figuring out a Zen riddle. That is, and people will look for something extraordinary when all they need to do is understand the simplicity of what they are viewing. Andy Warhol’s concept of pop art involved taking the very common images in presenting them in... VIEW ESSAY

In a rapidly changing world, organizations need to continually identify new opportunities beyond existing competencies if they are to survive and prosper. Customers also increasingly want customized products. Customer service has become a hygiene factor and customer loyalty is now being driven by faster innovation, rapid concept-to-market and product co-creation. This has led to the... VIEW ESSAY