Symbolism and American Dream in "The Great Gatsby"

Hope is lost through the futility in striving to achieve the American dream. Gatsby and Fox at the beginning of their narratives, initially act as representatives of prosperity and fortune. Gatsby, who orders his life around the sole purpose of being reunited with Daisy Buchanan, is a man of new money, someone who has supposably achieved the American Dream through his wealth. However, Gatsby who is visioned like so, is seen through the eyes of Carraway as a deeply flawed and unfulfilled man.

Don't use plagiarized sources. Get your custom essay on
“ Symbolism and American Dream in “The Great Gatsby” ”
Get custom paper
NEW! smart matching with writer

However, Carrway believes that Gatsby’s fascination of Daisy stretches far beyond his ambition for wealth and status. Nevertheless, he cannot help but admire Gatsby’s romantic idealization and hope for his and Daisy’s future. His exposure to the lies and deceits of \”careless people\” like Daisy and Tom cause him to contemplate on their intentions. Carraway is one of few characters in the novel who possesses morals.

It is through his father who acts as the moral compass, where he learns that “whenever [he] feels like criticizing any one, just remember that all the people in this world haven\’t had the advantages that [he’d] had”, which is where he decided he was “inclined to reserve all judgments”.

Similarly in Wall Street, Fox’s father, Carl Fox acts as the moral compass, teaching him, it’s not about going for “the easy buck” but about working hard and succeeding in the end. However, the American dream has initially been perverted and contaminated by those who take short cuts.

Gekko who acts as Fox’s financial mentor introduces Fox into a world of illegal business and teaches him to manipulate companies like his fathers to get wealthy and achieve status. Likewise, in order for Gatsby to obtain Daisy he bootlegs his way, with the help of Meyer Wolfsheim, a sinister and sneaky man who will make money at the expense of others. Through Carraways association with these people he has been affected, causing him to become foolish and one who manipulates the truth. In the film, Bud Fox is portrayed with a mind like Gekkos, willing to do anything to get to the top, however, Stone illustrates Fox to still bear moral values. This is depicted when Bud comes to terms with the difficult truth of achieving that one does not achieve the American Dream through illegal means. Symbolism in both works depict the corruption of the American Dream.

The green light personifies the loss of hope as it depicts Gatsby’s quest and desire for Daisy. It is situated across the bay on daisy’s dock, distinguishing their status and the imagery of Gatsby reaching for it, establishes how he is reaching for something he cannot seem to grasp. As the novel concludes and Gatsby gets killed, Carraway narrates, “Gatsby believed in the green light, the orgastic future that year by year recedes before us. At this point, Fitzgerald positions his audience to sympathise for Gatsby because he is too blind to look past his fixation for daisy and longing to recreate the past. Similarly, Fox was blinded by Gekkos lies as he was sucked into his world of fraud and got too carried away that he didn’t understand the damage he caused. The Brooklyn Bride in Wall Street symbolises the hope of the working class aspiring to grow, demonstrated through the sun rising over it every morning.

The valley of ashes suggests the difficulties for the people like George Wilson, who are trapped in the dirty ashes and have lost their liveliness. Tom, Fox and Gekko are men who represent the people who manipulate these people who have supposably lost the ability to attain the American Dream. Fitzgerald suggests that Gatsby’s death is inevitable, along with his ability to pursue Daisy because he will never be fit enough to have her. Fox comes to terms with the difficult truth through the mentoring of Carl Fox who assists him in making the right choice. As the novel concludes, Carraway is completely dispirited by his experiences in New York. After Gatsby’s death he says “the East was haunted for [him]”. He moves back to the west in order to regain the stability he once had with his family. He says that Jordan, Gatsby, Tom and Daisy too, were ill suited for the life in the east, possessing “some deficiency in common, which made us subtly unadaptable to Eastern life”.

In summary, Fitzgerald and Stone’s works both examine the themes of society being consumed by greed, the ill nature of materialism and consumerism and the decay of the American Dream. Similarly through the texts, Carraway and Fox come to terms with these difficult truths differently. Fox becomes knowledgeable of the reality that the stock market is corrupt with the help of his father, Carl fox who acts as the moral compass in the film. Carraway quietly observes the immoral and unethical nature of affairs and comes to conclusion that they were all unequipped for the frenzies of the New York Jazz age, who demonstrate lack of loyalties and those who disregard of tradition.

Symbolism and American Dream in "The Great Gatsby". (2020, Sep 10). Retrieved from https://studymoose.com/symbolism-and-american-dream-in-the-great-gatsby-essay 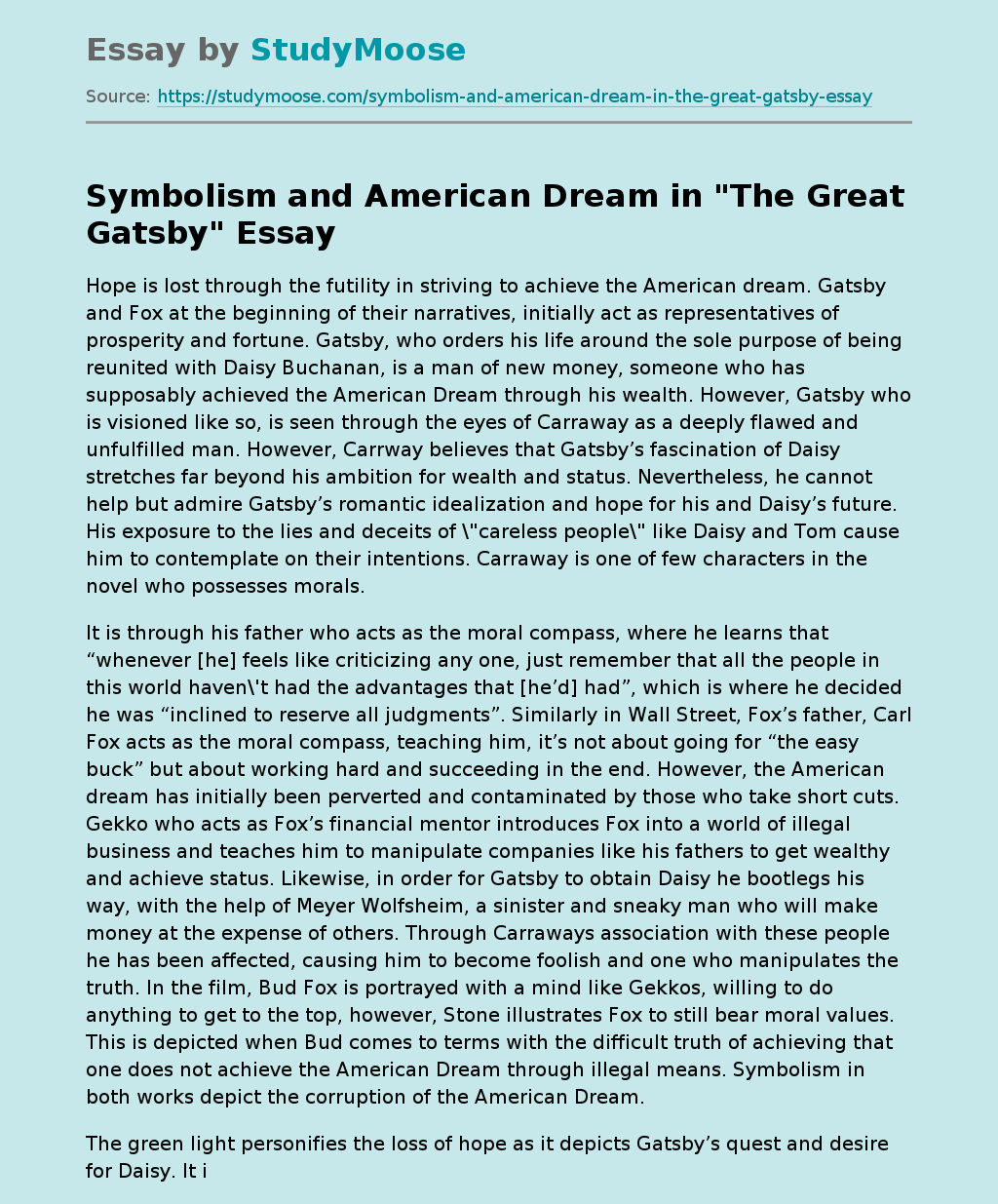