Sylvia Plath was born to middle class family in Massachusetts. Plath published her first poem when she was 8.She was bright, sensitive, was a perfectionist at everything she attempted. She was a brilliant kid, getting A grades in school, winning the top prizes. She was a model daughter. By 1950 when she joined Smith College she already had an remarkable list of publication. However Sylvia’s perfection was only superficial. Under this lay personal issues some of which probably were the result of the death of her father at the age of 8.

Her father, Otto Plath had been a strict father, and both his dictatorial nature and his death drastically defined her social relationships and affected her poems. In 1956, she married English poet Ted Hughes and in 1960 when she was only 28 she wrote her first book The Colossus which was published in England. The poems in this book were clearly precise, well structured clearly showed the dedication Plath had showed towards her apprenticeship.

Proficient in: Daddy By Sylvia Plath

Soon, she and Ted Hughes settled in a small English village in Devon. However the marriage broke apart in less than two years after the birth of their first child. During the winter of 1962-63 Sylvia was living in small London flat with her two children ill with flu and low on money. The hardships of her life seemed to increase her need to write and she often worked for 8 hours straight, at times even finished a poem in a day. In these last poems it is as if some deeper, powerful self has grabbed control of her; death is seen as a central theme and psychological dilemmas become almost physical.

On February 11, 1963, Sylvia Plath killed herself with cooking gas at the age of 30. Plath’s poems are often linked with the Confessional Movement. Her work is often singled out for its intense coupling of sadistic, violent imagery with playful alliteration and rhyme. Sylvia Plath’s “Daddy” is a brutal, spiteful poem which is commonly understood to be about her father Otto Plath. The poem begins with the speaker saying that he(daddy) “does not do anymore” and that she feels like she has been living in a “black shoe” too afraid to either breathe or sneeze. She refers to her father’s authoritarian nature in this stanza. The first stanza sounds a little bit like a nursery rhyme with its playful rhyme. However, this is very deceiving as the poem is dark, and painful. The speaker goes on to say that she needed to kill him (she refers to him as daddy) but that he had already died before she even had the time to do so.

Plath uses the phrase “marble –heavy” to set up an image of her father as a statue, more like a ghastly gargoyle. She describes him as a “bag full of god” resembling a statue with one big gray toe and head submerged in the Atlantic .She remembers how at some point in her life she even prayed for her father’s return from death. The speaker goes on to talk about the fact that she knows her father is from a Polish town that was overrun by “wars, wars, wars” but one of her Polish friend had told her that there are many towns by that name. One can sense some confusion in the poets mind. She is confused about her father’s hometown and where he put his “foot” and “root”. She goes on to talk about her lack of communication with her father, how she could never speak to him, how she felt every German was him and found the German language “obscene”. Sylvia Plath was so distant from her father that she felt like a Jew who was being sent to a concentration camp. She goes on to say that she started to think, feel like a Jew and her similarity to a gypsy reinforced such thoughts. In the very next stanza her fear and distance from her father is reemphasized when she describes him as the “Luftwaffe” with a neat moustache and bright Aryan eyes. She describes her father as the “panzer-man” which refers to German tank drivers continuing her father’s image as scary and dreadful. The speaker then goes on to say the “every woman loves a fascist men” thereby connecting her father with fascism, an authoritarian form of government. She then goes on to say what women love about fascist men: the (mans) boot in the (woman’s) face.

The speaker associates her father with fascism and brutality and there by implies that women love this brutality of men. Perhaps she too loved such a man or has seen other women fancy such men. When the speaker remembers her father she thinks of him standing at the blackboard, “with a cleft chin instead of a cleft foot”. The speaker calls her father a black man who “bit my pretty red heart in two” which probably means that he broke her heart. Her father died when she was ten and when she was twenty she tried to commit suicide to join him in after life. After this suicide attempt she got back in life and began to fix things in her life. The speaker goes on the say that after this she created a model of her father and gave him both a “Meinkampf look” and “a love of the rack and screw”. She goes on to say “so daddy, I’m finally through” which probably means that she doesn’t need her actual father anymore, which is strange since he’s already dead. The speaker probably is trying to imply that she doesn’t need her father anymore even in her memories.

The speaker says “If I’ve killed one man, I’ve killed two” which probably means that she has the killed the vampire in her father who drank her blood for a year or tormented her for a year and the second man she has killed is her father himself. Further she emphasizes the killing of her father by describing a scene of a village which would celebrate after a vampire has been killed by stabbing a stake through his heart. By describing such a scene she is probably trying to convey how she is happy now that he is dead because of how strict and authoritarian he was. Her concluding line in the poem is “Daddy, daddy you bastard I’m through” to accentuate her feelings and conclude that she is through with her father and all his memories. Plath, speaker of “Daddy” is obsessed with mortality – her father’s mortality, and her own. When the speaker’s father dies, she sees killing herself as the only way to reunite with her father. She also declares that she has to kill him. This poem explores the paradoxes of death, the afterlife, and reminiscences of the past. After all, “Daddy” is addressed to a dead person. “Daddy” is probably one of Plath’s best poems.

This poem can be considered partly autobiographical because the “daddy” in the poem is her own father. Psychologically, this poem a medium through which the speaker vents her anger towards her father. On the surface of the poem the speaker hurls abuses at her father and anger can be seen as the main emotion. However on a deeper level “daddy” is the symbolic man who has oppressed women throughout his life. The poem can also be seen as a symbol of war, genocide, atrocities. 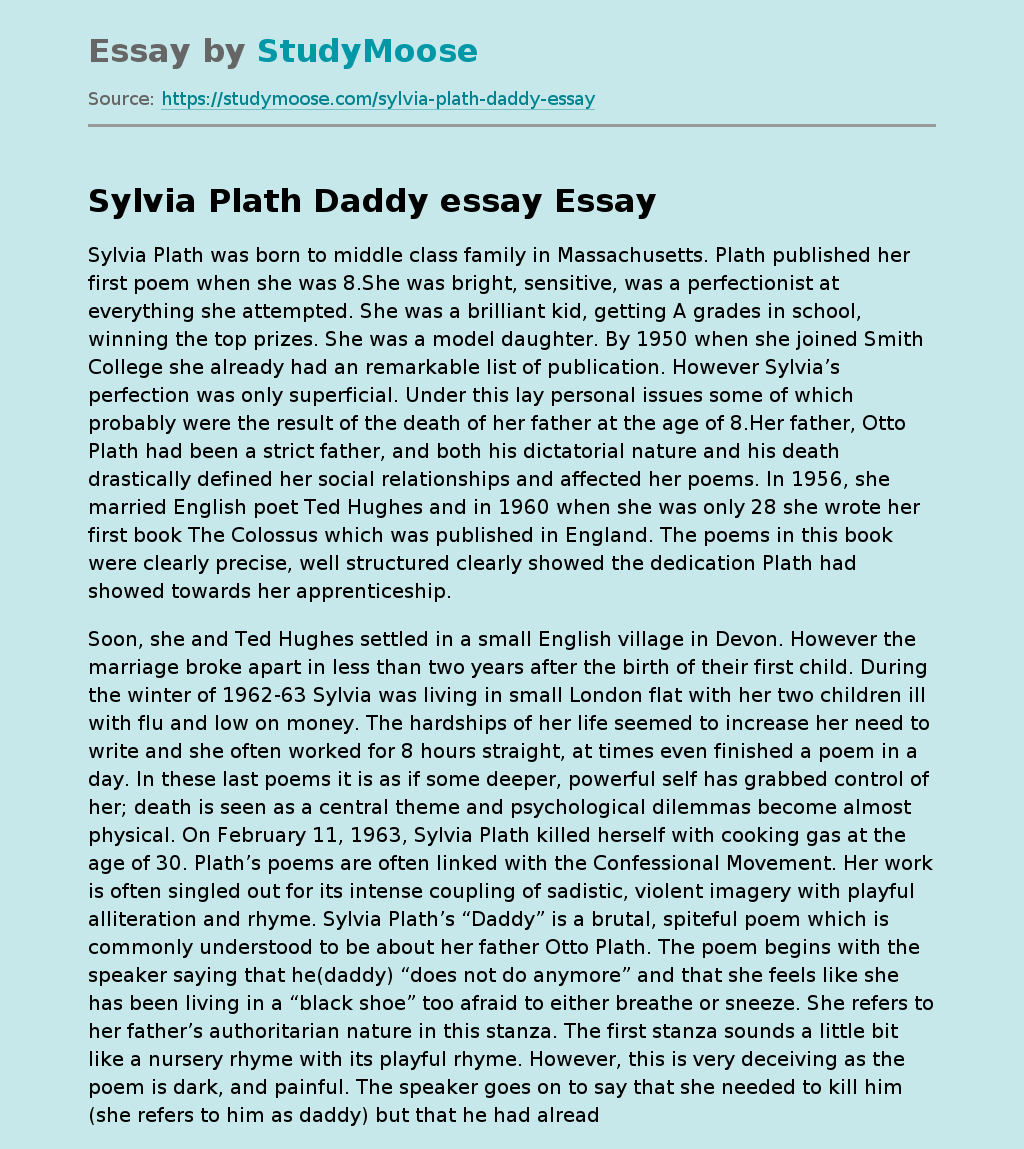