Sydney Carton in "A Tale of Two Cities" by Charles Dickens

Would you sacrifice your life for a friend, who married the person you loved? In the book A Tale of Two Cities, Sidney Carton is an alcoholic attorney, who does just that. Sidney Carton sacrifices his life, being married, and his future. Sidney Carton dies in an exceptionally christian like manner.

The book, A Tale of Two Cities, has events in both England and France, and is occurring in the years of 1775, during the french revolution. It starts with Lucie Manette is a beautiful French woman who grew up in England, whose parents are thought to be dead, she also has tremendous love for people.

Don't use plagiarized sources. Get your custom essay on
“ Sydney Carton in “A Tale of Two Cities” by Charles Dickens ”
Get custom paper
NEW! smart matching with writer

She is then told that her father is still alive. Lucie Menette, and Jarvis Lorrie, who is the business man who gave the news of her father, both go to Paris to retrieve Lucie’s father. They find him in a semitransparent state of mind. He doesn’t remember much, and can’t really talk. Lucie with great love for her long lost father, breaks his translucent state of mind, and he is seen in a normal state.

Charles Dickens writes in A Tale of Two Cities ‘Only his daughter had the power of charming this black brooding from his mind. She was the golden thread that united him to a Past beyond his misery, and to a Present beyond his misery: and the sound of her voice, the light of her face, the touch of her hand, had a strong beneficial influence with him almost always'(pg.

36). This quote explained the tremendous love she has towards her father, and the striking similitude looks Lucie has of her mother.

Five years later Charles Darnay a French aristocrat by birth is put on trial for passing english secrets to the French. Much evidence is pushed against him, and all seems lost for Charles, until his lawyer asks a man named Sidney Carton to stand up. The resemblance between Sidney and Charles is strikingly alike, for this reason Charles is acquitted from his court trial, because of doubt that he was the real spy. Later, Sidney and Charles, both being alien to each other go to a bar and talk. Sidney is sad and has no desire to do anything in life, except for being a drunk attorney. They both have feelings for Lucie, who was in the count room during the trial. But Sidney doesn’t tell Charles about his feelings for Lucie. Days Later Charles Darnay Has dinner with a wealthy French aristocrat named Marquis Evermonde, Charles is his nephew, and Charles Darnay is really Charles Evremonde.

The Marquis tells Charles that he is putting Charles name on his will for inheritance. But Charles doesn’t want a part in the will because all the Marquis wealth has been obtained through taking advantage of the poor peasants. The next morning the Marquis is found dead. After that Sidney Carton the attorney, goes and tells Lucie that he loves her, he’s a worthless man, and that she inspires him. Some time after, Lucie and Charles get married, and have a daughter. Charles doesn’t tell anyone about his real name except Lucie’s father because he’s an aristocrat. Five years later in 1789 during the commencement of the French Revolution, life is well for their family, and Sidney Carton becomes very close with Charles, and Lucie. Three years later in 1782 Charles Obtains a letter from a French official, the letter says that Charles has inherited the Marques wealth, and possessions. But the official needs help because the revolutionaries have imprisoned him.

So Charles goes to France and is arrested there, because someone uncovered his actual name, and aristocrat relation. He is locked up for about a year until his trial. In his trial he is accused of being an immigrant for leaving France. Also Lucie’s Father, Doctor Manette, who is beloved by the people, testifies in support for Charles, and he is acquitted from his case. Close after, Charles is arrested and tried in court again for new charges. But Surprisingly this time Doctor Manette, is one of the accusers that testifies against Charles, because he had a bad experience with an aristocrat in his past. This time Charles is sentenced to die.

After Charles trial, Sidney recites a bible verse to himself that promises eternal life through Christ. Then Sidney hears someone say they must accuse Lucie, her father, and her Daughter of Spying. So Sidney takes action and goes in to Charles jail cell, with the help of the guard, one which he knows, Sidney gets in. He tells Charles that Lucie sent him, and commands Charles to take off his clothes, then Sidney drugs Charles with a substance he bought earlier, from a chemist. Then he switches clothes which Charles, and Charles is unwillingly carried out by guards suspecting that he is a passed out Sidney. While the actual Sidney persists in the jail cell. Sidney was able to pull this knavish trick off because of his striking resemblance to Charles.

The next day Sidney is waiting in line for his execution when he offers solace to a peasant christian woman in front of him which relates to the thief on the cross, in the bible. Meantime Charles, his wife Lucie, their Daughter, Dr. Manette and their friends., all leave the country safe from the plots against them. Before Sidney Carton is killed at the guillotine he imagines Lucie and Charles together, and of them, invariably remembering him on their anniversary. And he imagines Lucie with a son named after him. He Thinks that sacrificing himself was, and is, the best thing he’s ever done. Charles Dickens writes in A Tale of Two Cities ‘They said of him, about the city that night, that it was the peacefullest man’s face ever beheld there. Many added that he looked sublime and prophetic'(pg. 291). This Quote is talking about how calm Sidney appeared right before he was executed, he finally felt, fully fulfilled.

Charles Dickens writes in A Tale of Two Cities ‘I am the resurrection and the life, saith the Lord: he that believeth in me, though he were dead, yet shall he live: and whosoever liveth and believeth in me, shall never die'(pg. 256). This is the quote that Sidney recited before he saved Charles, it also shows that he is a Christian. Sidney Carton had no goals in life, and felt his life was meaningless. Sidney shows his christian like attitude towards the people he knew and loved. He sacrificed his life and future, for others. The above quotes show the christian like manner in which he dies. Sidney wasn’t satisfied with the life he was living , that’s why he showed his love for Lucie and her family by sacrificing himself so they could live a happy life.

Sydney Carton in "A Tale of Two Cities" by Charles Dickens. (2020, May 05). Retrieved from https://studymoose.com/sydney-carton-in-a-tale-of-two-cities-by-charles-dickens-essay?post 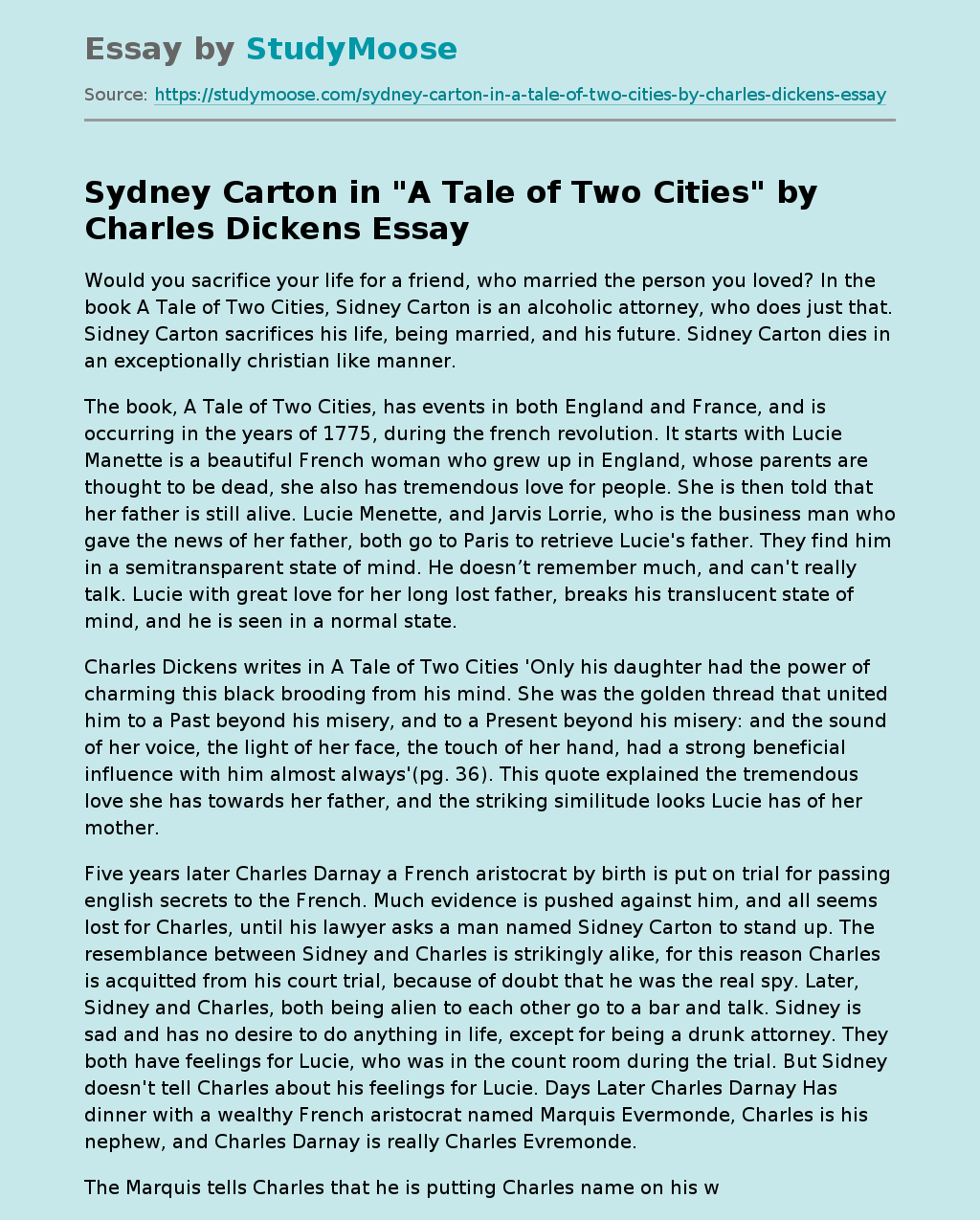