Don't use plagiarized sources. Get your custom essay on
“ Swot of walt disney ”
Get custom paper
NEW! smart matching with writer

Mission: “The mission of The Walt Disney Company is to be one of the world’s leading producers and providers of entertainment and information. Using our portfolio of brands to differentiate our content, services and consumer products, we seek to develop the most creative, innovative and profitable entertainment experiences and related products in the world.

innovation and technology
setting a high standard of excellence and maintaining that high standard the Disney Company is committed to positive, inclusive ideas about family, which provide enjoyment for all ages the Disney Company continues a tradition of timeless storytelling that delights and inspires the company is dedicated to honor and respect decency in order to inspire trust in the company Main competitors: NBC Universal Media, News Corp.

SWOT ANALSIS:
SWOT analysis – an analysis of an organization’s strengths and weaknesses alongside the opportunities and threats present in the external environment.” SWOT analysis involves the collection of information about internal and external factors which have, or may have, an impact on business. it’s a tool used for situation (business or personal) analysis!

SWOT is an acronym which stands for Strengths: factors that give an edge for the company over its competitors. Weaknesses: factors that can be harmful if used against the firm by its competitors. Opportunities: favorable situations which can bring a competitive advantage. Threats: unfavorable situations which can negatively affect the business. Strengths and weaknesses are internal to the company and can be directly managed by it, while the opportunities and threats are external and the company can only anticipate and react to them. Often, swot is presented in a form of a matrix as in the illustration below:

Swot is widely accepted tool due to its simplicity and value of focusing on the key issues which affect the firm. The aim of swot is to identify the strengths and weaknesses that are relevant in meeting opportunities and threats in particular situation. SWOT ANALYSIS OF WALT DISNEY:

Opportunities
Threats
1. Growth of entertainment industries in emerging markets
2. Expansion of movie production to new countries
1. Intense competition
2. Increasing piracy
3. Strong growth of online TV and online movie rental
Strengths
1. Strong product portfolio. Walt Disney’s products include broadcast
television network ABC and cable networks such as Disney Channel or ESPN, which is one of the most watched cable networks in the world. Combining the significant audience reach of these cable networks, (ESPN has nearly 300 million and Disney Channel 240 million subscribers) and the solid growth of cable television, Disney’s product portfolio provides a competitive advantage for the company over its competitors.

2. Brand reputation. Walt Disney brand has been known for more than 90 years in US and has been widely recognized worldwide, especially due to its Disney Channel, Disney Park resorts and movies from Walt Disney studios. The company is perceived as the primary family entertainment provider and was the 13th most valuable brand (valued at $27.

Few other Disney competitors have had such record of successful acquisitions. 4. Diversified businesses. The business operates five different business segments: media networks, parks and resorts, studio environment, consumer products and interactive media. These company’s segments are operated online and offline, in many different economies and are generating their income using different business models. Due to such diverse operations, Disney is less affected by changes in external environment than its competitors are.

5. Localization of products. Recently, Disney has started adapting its products to suit local tastes. Besides the parks and resorts, company’s movies and consumer products are adapted for Chinese market to attract more visitors. This is rarely initiated by the movie studio itself and is something that few other studios are doing. Weaknesses

1. Heavy dependence on income from North America. Although, Disney operates in more than 200 countries, it heavily depends on US and Canada markets for its income. More than 70% of the business the revenues come from US alone, while the major Disney’s competitor News Corporation receives less than 50% of revenues from US, making it less vulnerable to changes in US market. 2. Few opportunities for significant growth through acquisitions.

The Walt Disney Company is the largest entertainment provider in the world and has become so due to acquisition of competitors. The last Disney’s acquisition had to be approved by Federal Trade Commission so that the company wouldn’t have to deal with antitrust problems. This means that the size of the Disney’s business has become a concern for the government due to significant market concentration and that the company has very few opportunities to acquire competitors. Otherwise, Disney may become a subject to antitrust laws. Opportunities

1. Growth of paid TV industries in emerging economies. The Asia Pacific region accounted for more than 50% market share of the world pay TV subscribers (394 million) in 2011. It was expected to grow to more than 55% by the end of 2016, where China would account for more than 27% of the market.

The similar growth is expected in India as well. Disney Company has already entered these markets and should continue to strengthen its position there to benefit from such high industry growth. 2. Expansion of movie production to new countries. Disney has an opportunity to expand its movie production to such countries as India or China, where movie production industries have developed good quality infrastructure. This would result in lower movie production costs and more localized movies for India and China’s markets. Threats

1. Intense competition. Disney operates in very competitive industries such as media, tourism, parks and resorts, interactive entertainment and others.

The advancements in technology allow copying, transmitting and distributing copyrighted material much easier. With an increasing number of internet users and the speed of internet, this poses a great risk to Disney’s income, as fewer people would go to watch movies in a cinema or buy its DVD, when it’s freely available online. 3. Strong growth of online TV and online movie renting. Besides internet piracy, Disney’s media and movie production businesses may suffer from online TV and online movie rental growth. Subscription to online TV streaming and movie rental websites costs much less than to usual cable television providers. In addition, internet infrastructure is often managed by different companies, thus taking the power away from cable network providers.

Swot of walt disney. (2016, May 18). Retrieved from https://studymoose.com/swot-of-walt-disney-essay 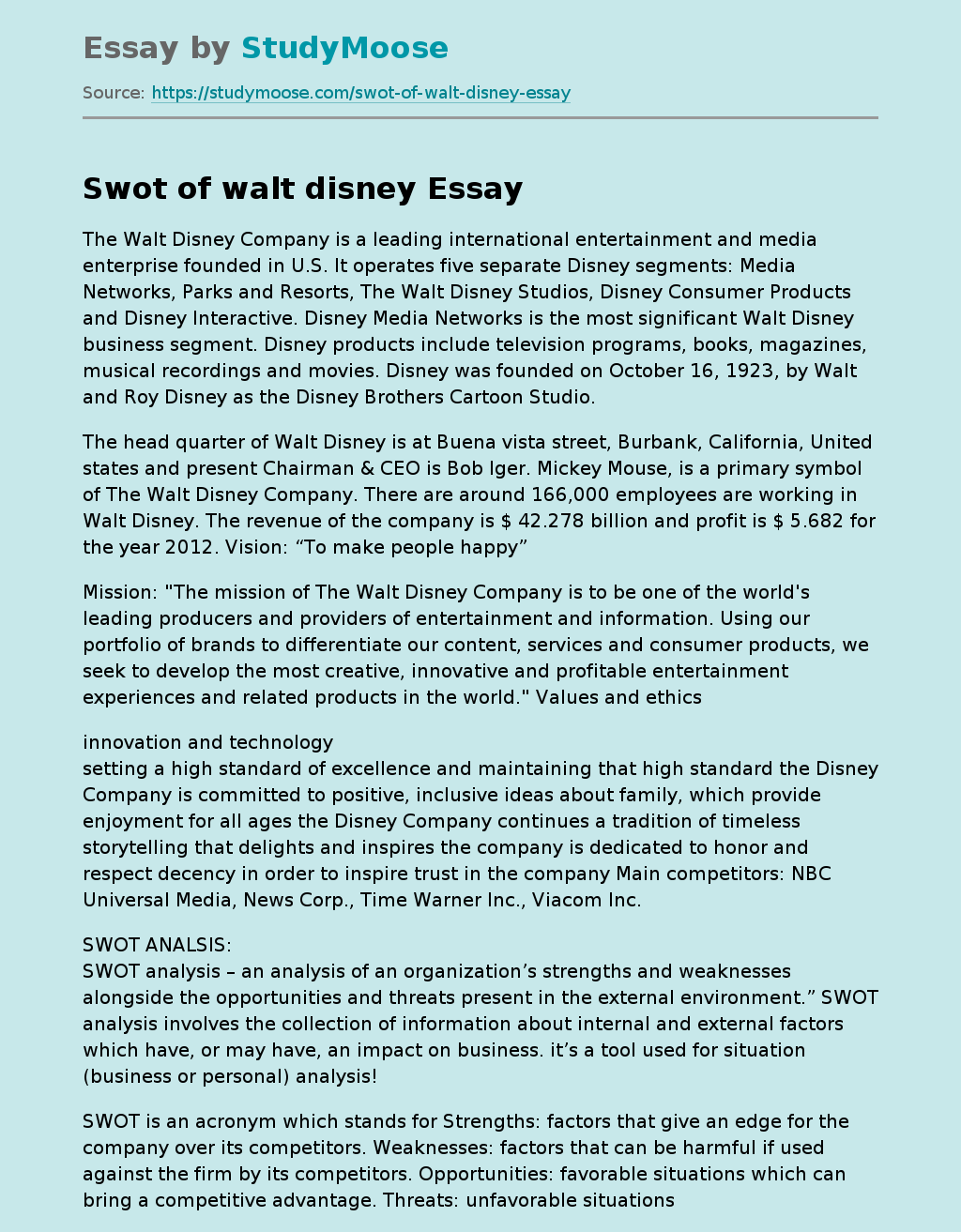