Swing Rioters and the Luddites

The Swing rioters were a bunch of farmers in 1830 that were scared of losing their jobs by the new machines. The new machines took up several of the mens job which lead to unemployment in Winter for the men. To help the laboures get by allowences were made but in the 1820’s they were cut this caused the laboures and their families even more greif and misery. To show the masters of the farms how annoyed they were and to show them that they needed them back.

Don't use plagiarized sources. Get your custom essay on
“ Swing Rioters and the Luddites  ”
Get custom paper
NEW! smart matching with writer

The unemployed laboures went around burning hayricks and smashing up threshing machines. This happened throughout the south of England, the riots spread to countries as far as Norfolk, Devon, Hereford and Sussex.

The reason of why they are called the Swing rioters is because they followed a man called Sir Captain Swing. No one really knows whether Sir Captain Swing is actually real or not. The laboures only really used him in their threat letters to get the farmers scared.

All the farmers hated Captain Swing as they had no one else to blame that was the only name that was signed at the bottom of the letters to keep them anonymous. The government acted very strongly against the rioters and took a firm stand 19 laboures were executed, 481 were transported to Austrailier band 644 were sent to prison. Out of all those punishments the transportation was known as the worst as the boat trip was awful. Any of the Swing rioters that were taken to Austrailier had to stay down at the bottom of the boat during the trip were there was a high risk of disease.

The Luddites were hundreds of workers in 1811-12 that were afraid the new machinery would take over their jobs. Because of this they attacked factorys and smashed up machines (the machines that took over their job). They also burned down factorys and mills which kept some of the new machines in them. The main weapon they used to help them smash things up with (mainly machines) was a sledge-hammer which they called the ‘Great Enoch’. Although they tried not to show it the government and the factory owners were afraid of the Luddites. A weaving factory near Middleton in Lancashire caught on fire by a large group of rioters. The damage was estimated at ï¿½6,000 (a very large amount at that time).

This was because the factory held steam driven power looms. This was thought to have been a very dumb thing to do as then the workers had no were else to work they were unemployed. The Luddites were named that because they followed a man called Ned Ludd no one really knows whether he is real or not he was thought to have been fictitious and made up to scare the masters of the factories. The Luddites warned them about things like “if you don’t get rid of your new machines we will trash the place and burn it down”. But the government took a firm hand on the matter and passed a law which said that people would be hanged if they were caught smashing machines.

Why the both group failed

Both the groups failed because of unrealistic aims and ineffective methods they shouldn’t of thought that if they started smashing things up that the government or masters of the machines would listen to them: it would have just got them mad which it did. They failed because of poor organisation and government actions as well they didn’t really stop to think about what they were doing and how it wouldn’t help. Also they didn’t get together and think about how they could legally and realistically get round the problem. They had to make it legall because with both groups there was a law made of a death penalty to anyone caught smashing up machines.

But the fact was they couldn’t easily get together and chat because the government had passed another law saying that there was only to be 3 or less people allowed to meet at once The government was making it as hard as possible for the people to start a riot or what they where scared of a revoulution. This meant that they couldn’t discuss anything very well and that their actions weren’t planned out. The final reasons of failment was limited support and lack of leadership the groups only had workers that had been sacked to back them up, there were quite a lot of people sacked as every machine took up several workmens jobs but there still weren’t enough people to overpower the rest. They also needed a real leader the fake leaders they used were fine for a while but I’m sure the victims or the letters cracked the secret. As the people following the name had no proof of the man and the leader had never been seen or showed before the fake leader secret thing wasn’t a good idea.

Swing Rioters and the Luddites . (2020, Jun 02). Retrieved from http://studymoose.com/swing-rioters-luddites-new-essay 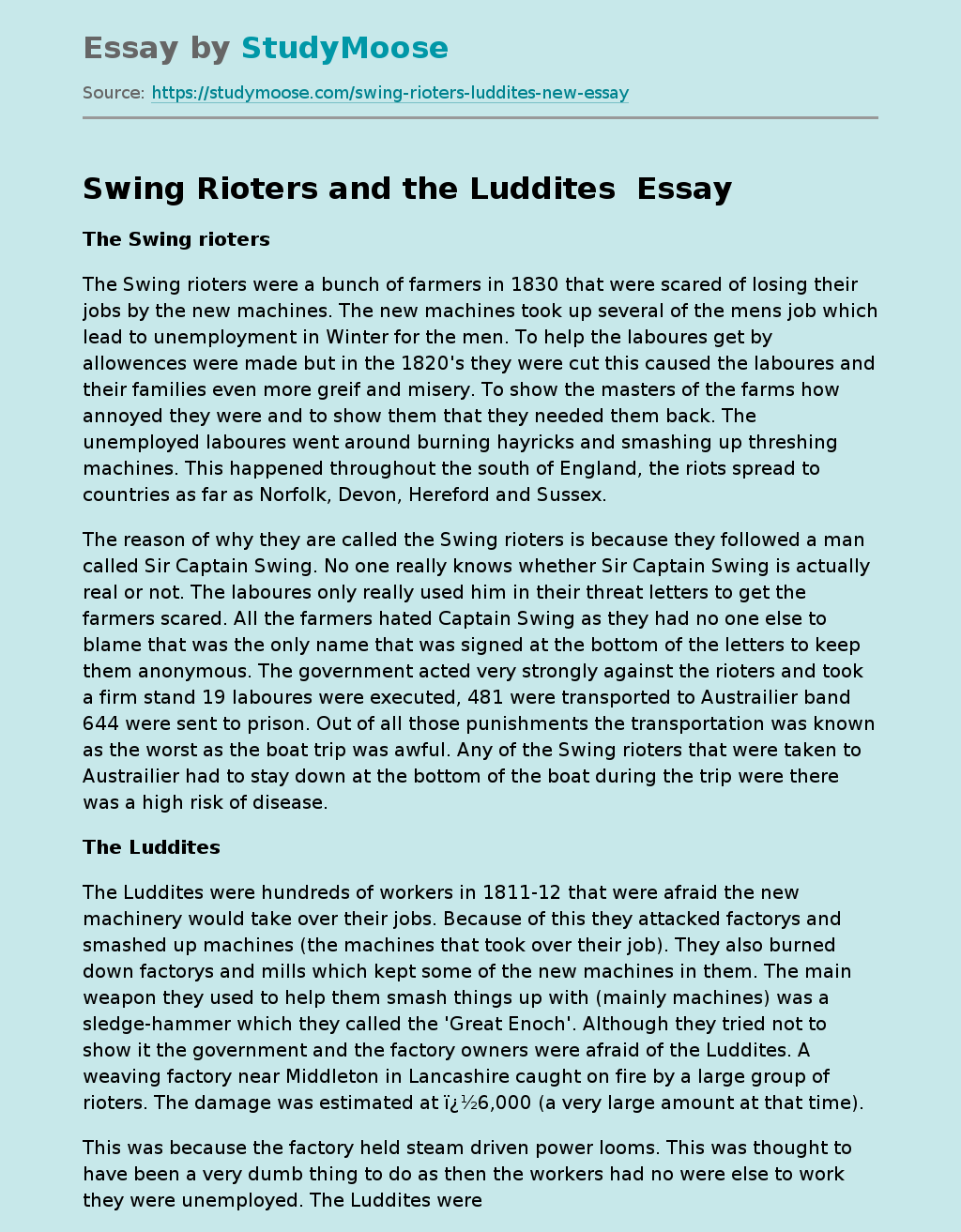