The 1993 drama “Swing Kids” starring Robert Sean Leonard and Christian Bale is overall a very good movie. The film is set in Nazi ruled Germany in the year 1939 and tells the incredible story of three boys and their love and fight for swing music. Swing Kids is a remarkable display of directing and acting talent. Thomas Carter’s eye for camera technique lends the feeling of actually being alongside the characters throughout their struggle. From the moment the movie began with a remarkable dance sequence, to possibly one of the most dramatic and heart wrenching final scenes in movie history, I was unable to take my eyes away from the screen.

Don't use plagiarized sources. Get your custom essay on
“ The 1993 drama “Swing Kids” ”
Get custom paper
NEW! smart matching with writer

The emotions that Swing Kids delivers to the viewers range from happiness and excitement, to anger and sadness.

I highly encourage all that have a passion for good film to sit back, relax, and enjoy “Swing Kids”. I give Swing Kids two thumbs up, and a 9/10. Germany in 1939 was a horrible place to be for some people.

The Nazi Government head by Adolf Hitler outlawed everything that wasn’t pure German, this included swing music from the United States. Peter Müller (played by Leonard) and his friends Thomas (Bale), and Arvid (Frank Whaley) had a very strong love and passion for swing music and broke the laws to listen to it. Not only was swing music banned because of it not being pure German, but many swing musicians were African American such as Duke Ellington, and Jewish such as Benny Goodman.

People of these ethnic and religious backgrounds were considered inferior in

Germany at the time. During the movie, as the Nazi’s grip on prohibited items grows tighter, Thomas joins the Hitler Jugend (Hitler Youth). The Hitler Jugend, or HJ as it was commonly known, was an organization that trained children and teenagers to be soldiers. The HJ strongly influenced Thomas to the point where he reports his own father for making negative remarks about the Fuhrer. These young boys and girls were actually trained to report they’re parents and friends if they did not fully support the Nazi ways. Peter takes a big risk speaking freely about his views on the German government and his love of swing music, which ultimately, lands him in hot water. After watching “Swing Kids” I have learned quite a bit about what it was like to live in Germany at the time that I didn’t know before.

For example, I had no idea that being in possession of ANYTHING that wasn’t pure German was a crime, which was usually punishable by death. I find this ridiculous. Something else I learned which I found quite interesting is the way that the dance clubs would discreetly play swing music. These clubs would have a person looking out for any Nazi officers patrolling the street, then if they saw one coming they would give the band a signal and they would quickly switch from playing to swing to playing some traditional German tunes.

Possibly the thing that I found the most interesting is how amazing the Nazi propaganda was. Through propaganda, the government was able to completely change people’s views on the Nazis and on Western culture. Also, the government could use the HJ to do certain tasks for them. I can recall a scene in the movie where Peter was given three small packages and told to deliver them to various addresses. Peter delivers two of them and can tell by the people who are receiving them that something is awry. He decides to find a secluded spot and open the remaining package. Inside he finds a small oak box with the swastika inlayed on the top. Further investigation by Peter leads to a horrific discovery. Inside of that box, and the other boxes, contained the ashes of “traitors” as they were labeled.

These “traitors” were people who were sent away to concentration camps because they were not 100 percent loyal to the Fuhrer. Horrific acts such as this really happened, and make you realize what a horrible place Germany was at the time. As far as historical accuracy goes, it was fairly accurate. There were a few certain things that I didn’t quite manage to wrap my head around. One of them, was the fact that not one actor in the entire movie spoke German, or had an even slight German accent. I believe that if they did speak with an accent that it would lend a great deal more of believability to the movie. Although the movie did depict most things pretty accurately. They showed how members of the gestapo (which were the secret Nazi police) could pretty much do

whatever they please. In one scene it shows a raid being taken place at a Jewish person’s house. They were clearing the contents of the house, and the one member of the gestapo was taking items to keep for himself. In any Canadian police force an act like that would be completely unacceptable. The film also focused a lot on the HJ. As far as my research goes, the way they depicted the activities that the HJ members would take part in such as boxing, and their duties, was completely accurate. I will say before as I said earlier on, “Swing Kids” is an all around excellent period movie. It really makes you feel as though you’ve travelled back in time. 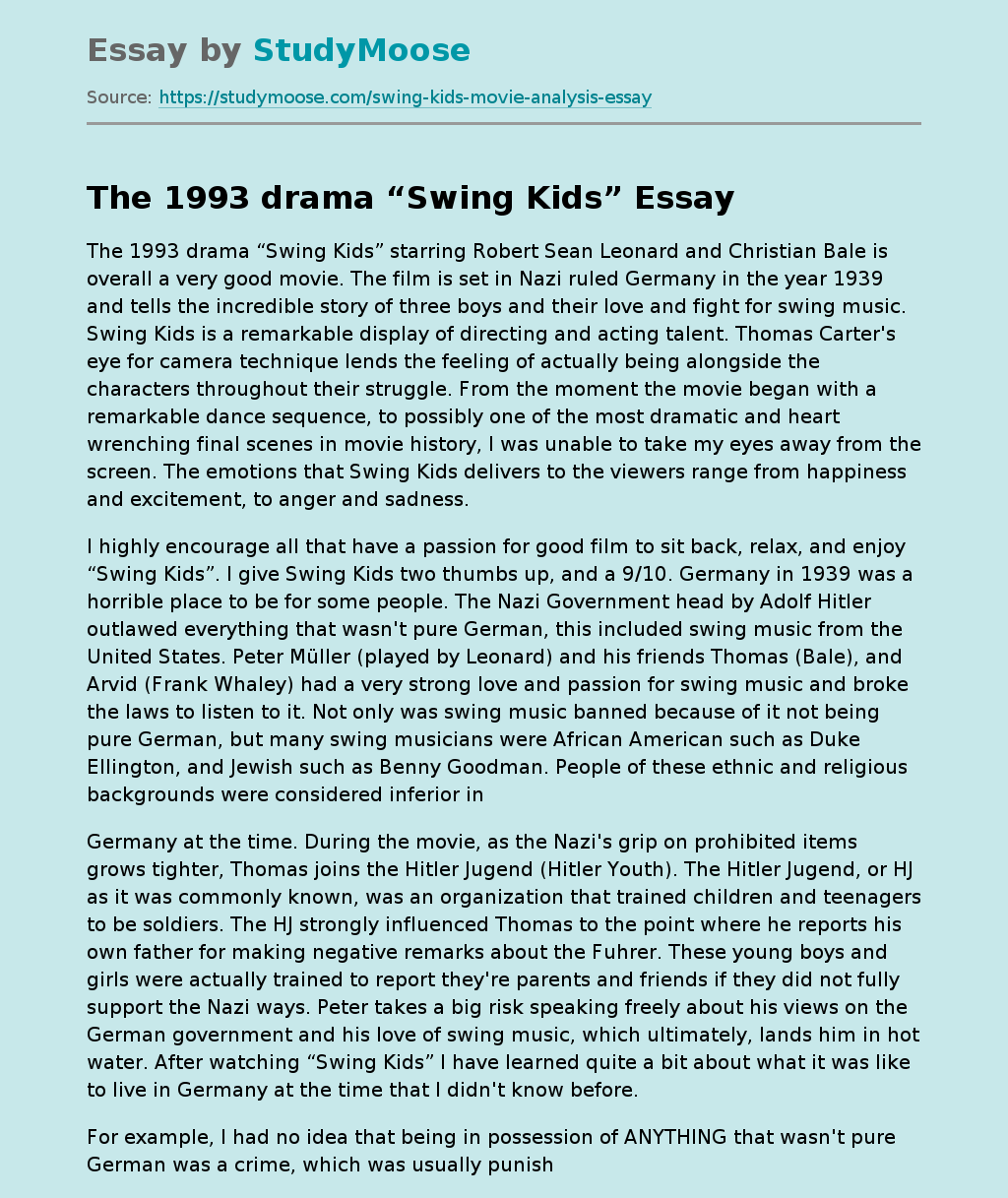