Mockingjay, written by Suzanne Collins, is the third and final book to the hit series, The Hunger Games. Katniss Everdeen has ventured through the Hunger Games and the third Quarter Quell, and has been rescued by the rebels in District 13 and has been convinced to become “the Mockingjay,” which happens to be the symbol of the rebellion in Panem. As she takes lead of the rebellion Katniss demands that the leader of the district, President Coin, allow freedom to all Quarter Quell participants, including Peeta who has been manipulated and brain- washed by the Capitol.

Katniss also demands that only she has the right to kill President Snow, leader of Panem. Aggravated and annoyed Katniss is kept in the dark from battles and works to create propaganda for the rebellion. Peeta’s brainwashing deeply effects and disturbs Katniss, but he slowly begins to improve after much treatment and therapy which had included major cake decorating.

His friend from his childhood, Delly Cartwright, helps with his recovery by bringing up lost fond memories of their past lives.

Not long after Peeta has become well enough to train with Katniss and her propaganda unit, in which they are then sent off on a mission to the Capitol. The rebels gain and convince and gain control of the districts and are able to begin an ambush on the Capitol. A propaganda filming in a “safe” Capitol neighborhood goes wrong, and Katniss and her team go deeper into the city with the hope of finding and killing President Snow.

Many members of Katniss’s team are killed, and Katniss is left alone and pushes toward Snow’s mansion, which has supposedly been opened to shelter Capitol children, but is actually intended to trap the kids and use them as human shields for President Snow. As she reaches the mansion, a hover plane with markings of the Capitol drops supply parachutes to the children which then explode, killing many of the children. A medical team made up of rebels, which also involves her younger sister Primrose, attempt to care for the wounded children but more parachutes are dropped and kill the rest of the children along with the medics.

Katniss more raged than ever is determined to find Snow in order to avenge not only the District’s, but also her sister. After the victory of the rebels it has been decided that a Hunger Games will be held for the children in the Capitol. While recovering from the same explosion that killed her sister, Katniss accidentally runs into President Snow who is under house arrest. Snow tells her that he did not order the assault that killed Prim, saying he would have escaped if he had access to a hover plane.

Katniss assumes it was Gale, but as he denies it she cannot help but face her doubt and finally comes up with the conclusion that President Coin had ordered the assault. At Snow’s execution, Katniss becomes aggravated and shoots Coin instead. The watchers of the execution become angry and begin to run around aimlessly stomping on President Snow until he is dead. Katniss is ordered back to District 12 after trying to commit suicide and after many months Peeta comes to join her and they both fall in love again with eachother and with Haymitch’s help write a book about the Hunger Games and tributes to keep their memory.

Katniss was faced with the problem of leading the rebellion against the Capitol. “Yeah, so this is the deal. I’ll be you Mockingjay.” (Collins 38) Katniss takes up the role as the “Mockingjay” and becomes the face of the rebellion.

Katniss changes from the beginning of not only Mockingjay, but also throughout the entire series of The Hunger Games. Katniss not only has become the face of the rebellion, but she has led all of Panem against the Capitol and had defeated it. “I’ll tell them how I survive it. I’ll tell them that on bad mornings, it feels impossible to take pleasure in anything because I’m afraid it could be taken away.” (Collins 390)

Suzanne Collins used very specific wording to describe the characters and setting in the book Mockingjay. “My name is Katniss Everdeen. I am seventeen years old. My home is District 12. I was in the Hunger Games. I escaped. The Capitol hates me…” (Collins 4) Though Collins doesn’t go too much into detail to describe characters or setting she does explain events and characters in an very succinct manner.

A major symbol in Mockingjay is the “Mockingjay.” Katniss represents the Mockingjay, which symbolizes the rebellion against the Capitol. The jabberjay was a bird that was used by the Capitol as spies but was compromised by rebels. The Capitol had realized they were being fed false information by the rebels and were left alone in the wild where they mated with mockingbirds hence the name Mockingjay. “I take a deep breath. My arms rise slightly – as if recalling the black-and-white wings Cinna gave me – then come to rest at my sides… “I’m going to be the Mockingjay.” (Collins 31)

The book Mockingjay was a very entertaining book and was also a part of a very entertaining series. This book was recommended by a family member and the dialogue and the descriptions were captivating. I would recommend this book to anyone who is a fan of the genre and tell them that his series was a great one. The book was very absorbing and seemed to end too fast. 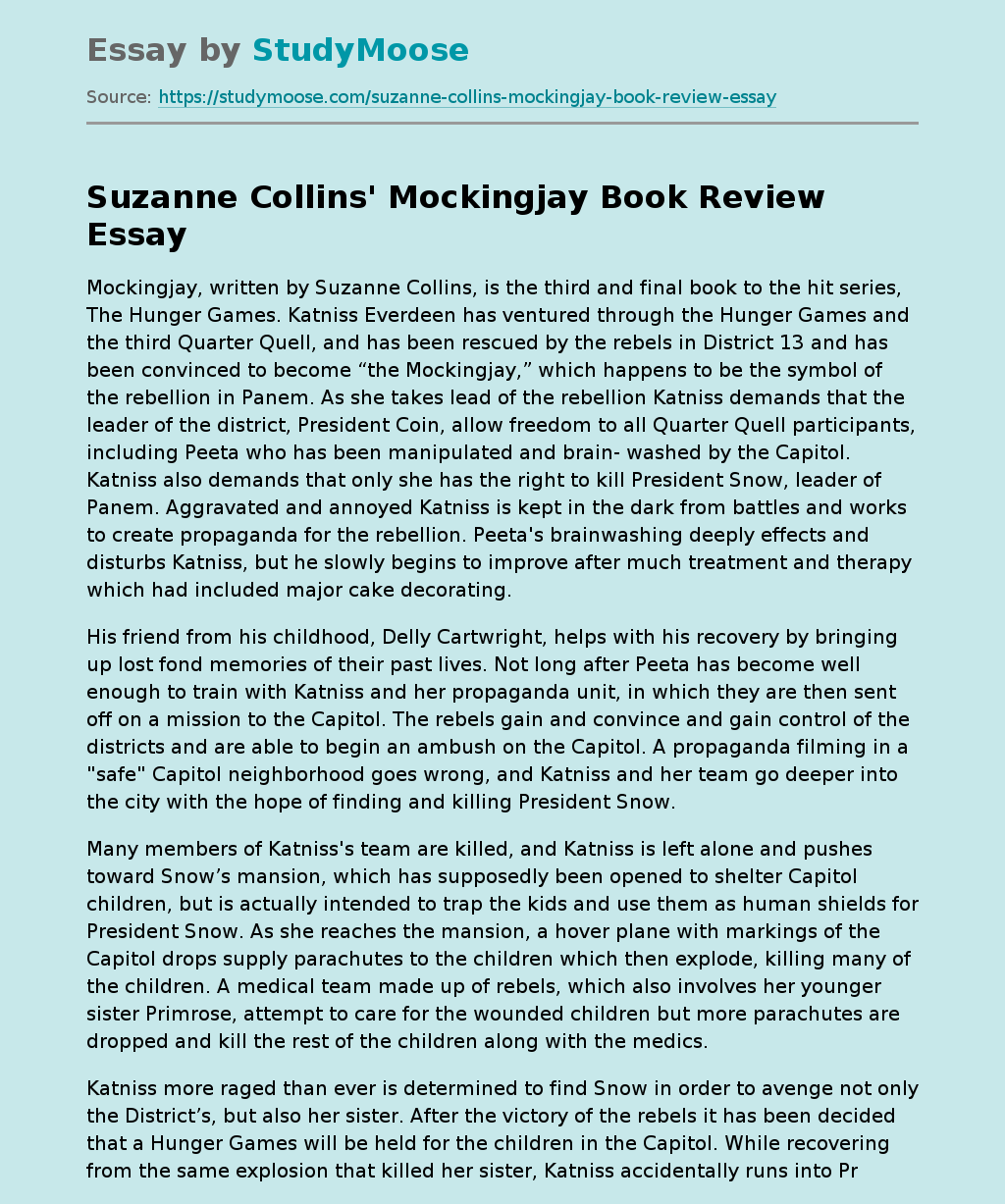