Marbury v. Madison:(1803) Judicial review In 1801, Justice William Marbury was to have received a commission from President Adams, but Secretary of State James Madison refused to issue the commission. Chief Justice Marshall stated that the Judiciary Act of 1789, which was the basis for Marbury’s claim, conflicted with Article III of the Constitution.

Don't use plagiarized sources. Get your custom essay on
“ Supreme Court ”
Get custom paper
NEW! smart matching with writer

Marbury did not receive the commission. This case determined that the Supreme Court and not the states would have the ultimate word on whether an issue was in violation of the Constitution.

The Supreme Court judged that when the state of Georgia rescinded a land grant it was unconstitutional since it revoked the rights already granted in the contract. This was the first case to declare a state law in violation of the Constitution. . Dartmouth College v. Woodward: (1819) Contracts and State law The New Hampshire legislature amended the original charter of the college, which had been in place since 1769, to make the college more accessible to the public.

The problem was that the legislature acted without consultation with the college trustee.

The Supreme Court ruled that the original charter was inviolable as the charter was a contract. This decision led to a strengthening of property rights against state abridgement. McCulloch v. Maryland: (1819) Implied powers James Madison created a national bank, The state of Maryland believed this was an intrusion into states’ rights and attempted to tax the bank. James McCullough, who worked at the bank, refused to pay the state taxes because he believed the state had no right to tax a national bank.

Marshall stated. That the bank was incompliance with the constitution and could not be subjected to state taxes.

This case established the rule that states could not tax an institution of the federal government. Gibbons v. Ogden: (1824) Interstate commerce Act issue was the right to carry passengers along a canal from New York to New Jersey. The state of New York had granted Aaron Ogden the exclusive right. The federal government issued a license to Thomas Gibbons for the same route. On appeal the case went to the Supreme Court after Ogden sued Gibbons and won. The Supreme Court decided that Gibbons was right and that states cannot stop Congress regulating’ interstate commerce.

This was a landmark case because it established federal authority over the states. This became the basis of the Civil Rights Act of 1964. Cherokee Nation v. The State of Georgia: (1831) State law and Indians The Cherokee Indians had been farming the land in the western part of the state and had established their own government. The Georgians passed laws and tried to have the Cherokee government declared null and void. The Cherokee nation brought the suit to the Supreme Court on the grounds that the Cherokee nation was a foreign entity and therefore the state of Georgia had no rights.

This was just one more instance of the Marshall Court increasing power for the federal government over state governments. The Marshall court attempted to protect the property rights of the Indians. Unfortunately, even Marshall was unable to keep the Indians from continually being forced off their land. . Scott v. Sanford: (1857) Citizenship and Slavery Dred Scott was the slave of an army doctor. The doctor had lived in free states and in free territories, but had returned to Missouri, a slave state, before his death. Scott sued the doctor’s wife for his freedom on the basis that in a free state he had been free.

The Supreme Court decided that Congress had no power to forbid slavery in the territories. They also said that as a slave, Scott was not a citizen and was not eligible to sue in a federal court. This decision annulled the Missouri Compromise and the Kansas-Nebraska Act. The case centered on 3 issues: a) Was Dred Scott a citizen? b) Could Congress prohibit slavery in the territories? c) If a slave was property, then shouldn’t Sanford be compensated? Scott and his family did win their freedom because Scott’s new owner was the widow’s brother and a known abolitionist.

This case was never about the freedom of Dred Scott but about the future expansion of slavery into the territories. Texas v. White:(1869) Legality of Confederate Government Policies After the Civil War the reconstruction government of the state of Texas brought suit to regain state-owned securities, which had been sold by the Confederate state legislators during the war. The defense claimed that since Texas had not been restored to the Union there were no grounds for a federal court case. Chief Justice Salmon P. Chase maintained that since secession was illegal, Texas had never left the Union.

Chase said the Confederate government of the state had been unlawful so all acts carried out by the government were null and void. Therefore the state was entitled to recover the securities. Plessy v. Ferguson: (1896) Separate but equal Homer Plessy was arrested in Louisiana for riding in a whites-only railroad car. Plessy, who was one-eighth African American, appealed on the basis of the equal protection clause of the Fourteenth Amendment. The court said that so long as the facilities’ were equal then it was legal to racially separate.

This became the impetus for segregation across the south. Swift and Company v. United States: (1905) Defining Interstate Commerce. Swift claimed to be participating in business that was intrastate and not interstate, which he added, meant the interstate commerce act did not apply to his business. The court agreed unanimously that this was not the case and Swift was trying to create a monopoly. Armed with the Sherman Antitrust Act, Oliver Wendell Holmes said the company had a “current of commerce” among states. Bunting v. Oregon: (1917) Government Enforcement of 10-Hour Workday. In 1913 Oregon established a 10-hour workday for all men and women in mills or manufacturing industries.

Any work beyond the ten hours was payable at a rate of time -and-a-half. Bunting, who owned a factory required his workers to work a 13 hour day and did not pay overtime. The Court was split on the issue and did not want to be seen as a regulator of wages. Eventually the court decided that overtime pay did not constitute wage regulation. Schenck v. United States: (1919) Freedom of Speech during Wartime. During World War I Charles Schenck had distributed pamphlets that said the draft was illegal. He was charged under the Espionage Act (1917).

Justice Oliver Wendell Holmes rejected the argument that the pamphlets were protected by the free speech clause of the Constitution. Holmes told the court that freedom of speech could be suppressed if there is a “clear and present danger”, and since this happened during a time of war, there was such a circumstance. Korematsu v. United States: (1944) Legality of Japanese Internment during WWII In1942, after the Japanese attack on Pearl Harbor, President Roosevelt issued Executive Order 9066, which required the forced relocation of over 100,000 Japanese-Americans to relocation camps.

The Supreme Court ruled the relocation was illegal. In1988 these people, of whom many were citizens, received compensation. tL-94l.. . Brown v. Board of Education of Topeka, Kansas: (1954) Equal protection Linda brown was denied admission to a local elementary school in Topeka, Kansas. The basis for her denial was that she was black. Chief Justice Earl Warren overruled the “separate but equal” doctrine of Plessy v. Ferguson. He stated that the public schools violated the fourteenth amendment condition of equal protection under the law.

The defendants claimed that the inferior conditions in segregated schools hindered their development. After the ruling was made, the court declared that segregation must end. Gideon v. Wainwright: (1963) Representation by Counsel Gideon was accused of a breaking into a poolroom in Florida but he had no financial means to secure a defense. He requested a defense counsel but was refused and was forced to defend himself.

The court returned ‘a guilty verdict. This led to the Supreme Court ruling that all people were entitled to legal counsel regardless of their ability to pay for legal counsel. Heart of Atlanta Motel v. United States: (1964) Interstate commerce In 1964 Congress tried to pass the Civil Rights Act based on its power to regulate interstate commerce. Congress believed it had the right to ban discrimination in public accommodation and in employment. A motel owner challenged the law on the basis, that he had a local business which should not be considered interstate commerce.

The Supreme Court ruled that since the business gained most of its income from interstate commerce; thus, the business was liable to the rules of Article 1, section 8 of the Interstate Commerce Act. Wesberry v. Sanders: (1964) one man tine vote This case dealt ith the apportionment of congressional districts in Georgia. The voters of Georgia’s fifth congressional district, easily the largest district, believed that their representation was not as equal as that of other districts with less people. They argued that because the state legislators had failed to, realign the districts their vote was debased. The Supreme Court ruled that as much as possible districts should be comparable in terms of population. Miranda v. Arizona: (1966) Rights in custody Ernesto Miranda a man who had not completed the ninth grade was arrested at his home in Arizona and identified as a suspect ina rape-kidnapping case.

When he was questioned about the crime Miranda maintained he was innocent, but after two hours of interrogation he signed a confession. At the trial the confession was admitted as evidence and the court found Miranda guilty. The police acknowledged that Miranda had not been made aware. of his rights during the process nor had he had access to legal counsel. While the Miranda confession was given with relatively little pressure it still violated the constitutional requirements that governed such procedures. Inthis case, the Warren court ruled that the accused must be made aware of his or her rights from the beginning.

Roe v. Wade: (1973) Right to Privacy During the sexual revolution of the 1960s and 1970s the number of abortions performed illegally was unbelievably high. Inits decision the Court struck down a Texas law that made it illegal to perform abortions unless the woman’s life was risk. “Jane Roe” an unmarried mother wanted to terminate her pregnancy but she did not meet the necessary requirements. The Court sided with Roe and said that a woman had a constitutional right to privacy that extended to cover a decision whether or not to terminate her pregnancy. Bakke v.

Board of Regents of California: . (1977) Affirmative Action In an attempt to get greater racial and ethnic diversity The University of California Medical School at Davis created a special category for minority students. This was the first constitutional test for affirmative action. Bakke, a white student, was rejected by the university and filed a lawsuit alleging discrimination under the Civil Rights Act of 1965. The Court said the university can use special criteria to determine which students gained acceptance so long as it did not use a quota system. 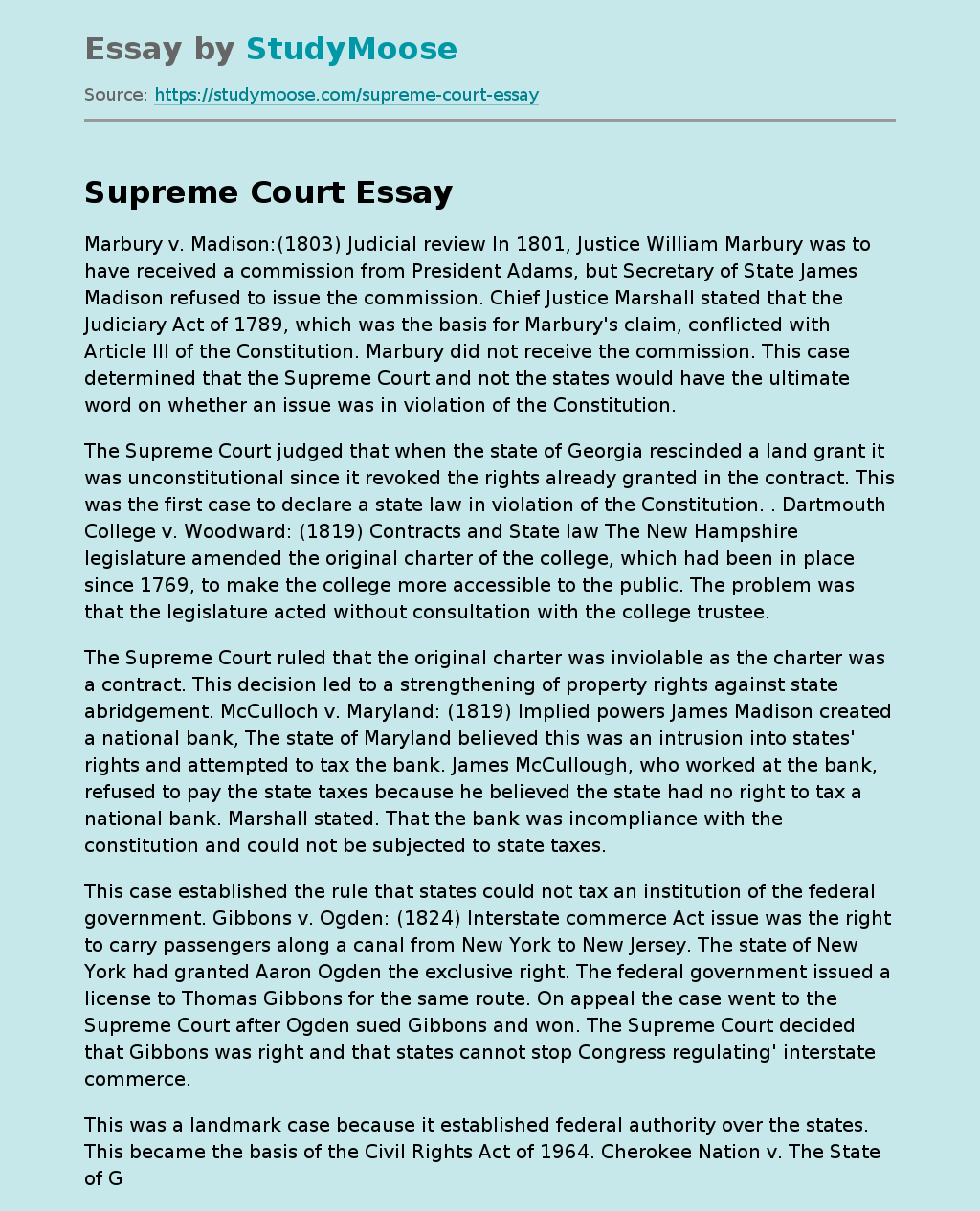