The repaid changing and increasingly complex business environment drive companies to operate innovatedly. However, these situations require the company to make more important decisions that need a substantial amount of data, information and knowledge.Norfolk southern has set an expample by taking advantage of data warehousing technologies to support decision making and gain success. This kind of computerized support used by Norfolk southern can be demostrated by the business pressure-reponses-support model. The business pressure-responses-support model can be divided into three components: business pressure that result from today’s business environment, actions taken by company to response the pressures and computeried support that facilitates the monitoering of the environment and promote the response actions taken by organizations.

Turn in your highest-quality paper
Get a qualified writer to help you with
“ Support Systems And Business Intelligence ”
Get high-quality paper
NEW! AI matching with writer

Business environment factors,including markets,consumer demands,technology and societal factors, has created opportunities and threads for organizations which then will take different actions to be competitive.

Making good decisions mean managers can better preform their roles with assessible information and computer support.There is three major managerial roles within the organizations: interpersonal, informational and decisional. Interpersonal roles allow the manager to interact with employees for organizational goals. Figurehead, leader and lasion are three roles that listed under interpersonal roles. The informational roles are the roles that a manager can create and share knowledge to organization. These roles include monitor, disseminator and spokesperson. The decisional roles involve the process of decision making by using information and include the entrepreneur, disturbance-handler, resources-allocators.

To make better decision, managers take four steps which include define the problem,consturct a model that describe the real world problem,indentify possible soultions to the modeled problem and evalute the solutions and compare,choose,recommend a potnetial soultions to the problem. The high penetration of computeried system in complex and wide managerial areas has made manager awared of the importance of computeried support in decision making.

Today’s computer application focuses on problem analysis and solution application. Computer decision support system benefits decision support through speedy computations, improved communcation and collabration, et al. Thus, it enables the decision maker to make better, quicker and accurate decisions. Gorry and Scott Morton have created the classical framework of computerized decision support system with two dismensions-the degree of structuredness and the type pf control. The different levels in an organization have different decision making.Decisions can be structured, semistructured and unstructured. Structured decisions are the decision at the operational level of the organization and routine tasks, such as manufacturing. Unstructured decisions are at the strategic level and have no plan.

Semistructured decisions have some aspect of the problem are structured and others are unstructured. Strategic planing, management control and operational control are there elements of the framework. Strategic planning involve defining long term goals and policies for resource allocation.Management control is the efficient use of resources to accomplish organizaional goals,while operational control is the efficient and effective inplemmentation of specific tasks. To support decision making, automated decision system (ADS) is a new choice to provide solution to repetitive management problems. Take case 1 as an example, Gaint food stores apply ADS for price decision, allowing Gaint food stores to handle a large amount of data and automate pricing schemes.

1. Define the problem
2. Classify the problem into a srandard caregory.
3. Construct a model that describes the real-world problem
4. Identify possible soiutions to the rnodeled problem ancl evaluate the solutions. 5. Compare, choose, and recomrnend a potential solution to the problem. Decision support system is a computeried system to support decision making in an organization. For instance, Glaxo Smith Kline, a global pharmaceutical company, employs decision support system to improve inventory decision through analyzing optimal satfy stock level. The architecture of DSS has four components, which are data, model that manipulate data related to specific situation, knowledge and user interface.Model-oriented DSS and data orientied DSS are types of DSS. Model-oriented DSS are used to create proper soultion to a problem, while data oriented DSS are used to support ad hoc reporting and queries.

Business intelligence is developed to enable interactive access to data, to enable manipulation of data, and to give business, managers and analysts the ability to conduct appropriate analysis. By using various tools and technology to collect data, business intelligence is data anaysis process for presenting information to help manager to make better business decisions. Similar to the architecture of DSS, BI architecture is make up of a datawarehouse, business analytics, business performance mangement and a user interface.

Datawarehouse store historical or current data that end users can access to with analitical tool. Furthermore, business performance management monitor key performance indicators, which then will be presented in dashboards or portals that can be accessed by users. Apart from this, BI brings tangible and intangible benefit, such as timely providing accurate information that important for decision making. The similarities and differences between BI and DSS are summeried as follow. Similarities and differences between BI and DSS

Decision making has several charaterisitics. Changing environmental factors may affect decision making quality by posing pressure to managers. Involving appropriate methodologies and tools to assist decision making is curial. In term of the contrast between decision making and problem solving,four phrase decision process is used to distingurish them.The four phrase are intellignece,design,choice,and implementation. In addition, decision style, the manner in which manager make decision, is vital to consider in decision making process.

Different decision styles require different computer supports. A decision made by group is more complicated and is appropriate to medium size to large organizaions in which collaboration among individuals is more difficult. Hence, computer support should be provided at a board levels. Low managerial levels and small organizations often make individual decisions which will be automated finally.Web-based MSS can support group and individual decision. A model is three dimensonal and has three types that summerized as follow.

Following decision making process is improtant and there are four phrases of the decision making process, including intelligence, design, choice, and implementation. In the intellignence phrase,decision makers begain by identifing problem through data collecion and analysis based on current situation. Problem then will be classified according to degree of structureness. Complex problem even will be divided into subproblems which are easier to solve.The authority to solve the problem wil be assigned to someone or some group who have ability to solve. After defining the correct problem, understanding the problem and testing soultion assist in building model to represent reality. A model representing the system is constrcuted based on the identified variable and their relationships.The model includes normative model and descriptive model.

Normative model describe models in which the chosen alternative is the best of all possible alernatives. To find the best alternative, optimization process is involved to test all alternatives and consider the impact of each alternative on the entire organization. However, the process may be time consuming, expensive and complicated. Different to optimization process, suboptimation process aggregrate other department into simple model components so that the decision is made without considering other part of the organization. In respect of the descriptive model, this model is a mathematical model that demostrate the things as they are or as they are believed to be.

The choice phrase will evaluate and introduce a proposed solution which will be applied to a model if it is reasonable. Many search approaches, such as analytical techniques, will be used to search for an appropriate solution. The implementation phrase will execute the solution to solve the real problem. Sacrificing is a form of suboptimation.It is difficult to get a best solution with normative model or descriptive model.Due to bouned rationality,human’s rational thinking may not produce a solution that are ratonal for real world problems.

3. Decision support systems concept, methodologies, and technologies:An overview Decision support system was originally developed to support the semistructed and unstructed decision making. Its applications has their own databases and solve a certain problem.It is different to business intelligence application in which analytical methods are applied to identify and report problem.Hence,model is critical to be included in DSS. According to AIS SIGDSS classification, DSS is calssified into the five categories. Different kinds of DSS provide support for all phrases of decision making process.

Charterasitics
Communications-driven and group DSS
Use computer collaboration, and communication technologies
Support groups in tasks that may or may not include decision making
Data-driven DSS
Processing data into information and presenting the information to a decision maker
Document-driven DSS
Rely on knowledge coding, analysis, search, and retrieval for decision support
Knowledge-driven DSS, data mining, and management
ES applications Involve the application of knowiedge technologies to address specific decision support needs
Model-driven DSS

Group support
a group of people,all of whom are engaged in separate but highly interrelated tasks

Group support system
operate with all participants in the same room, at the same time deployed over the web and are designed to operate in anytime/anyplace mode how they are developed
Custom made system
Custom made for indiviual users and organization.

Support any of the other subsystems or act as an independent component Data management subsystem include DSS database, DBMS, data directory and query facility. DSS database extract data from internal data, external data and private data. Database management system create，access and update database. It provides capabilities, such as update data records and files; trace data use with the DSS, et al. The query facility access, manipulates, and query data while the directory is a catalog of all the data in a database. The model management subsystem is composed of model base, DBMS, modeling language, model directory, model execution, integration, and command processor.The model base encompass quantitative models that provide the anaylsis capabilities in a DSS.The four database are as followings.

Models are customized by using programming tools and languages as DDS is build to the cope with semistructd and unstructed problems.Those languages may include java, C++, et al.The new development of data mining, OLAP, et al contiribute to the development of DSS. In respect of the model base management system, it has four function, which include model creation, generation of new routines and reports, model updating and changing as well as model data manipulation. 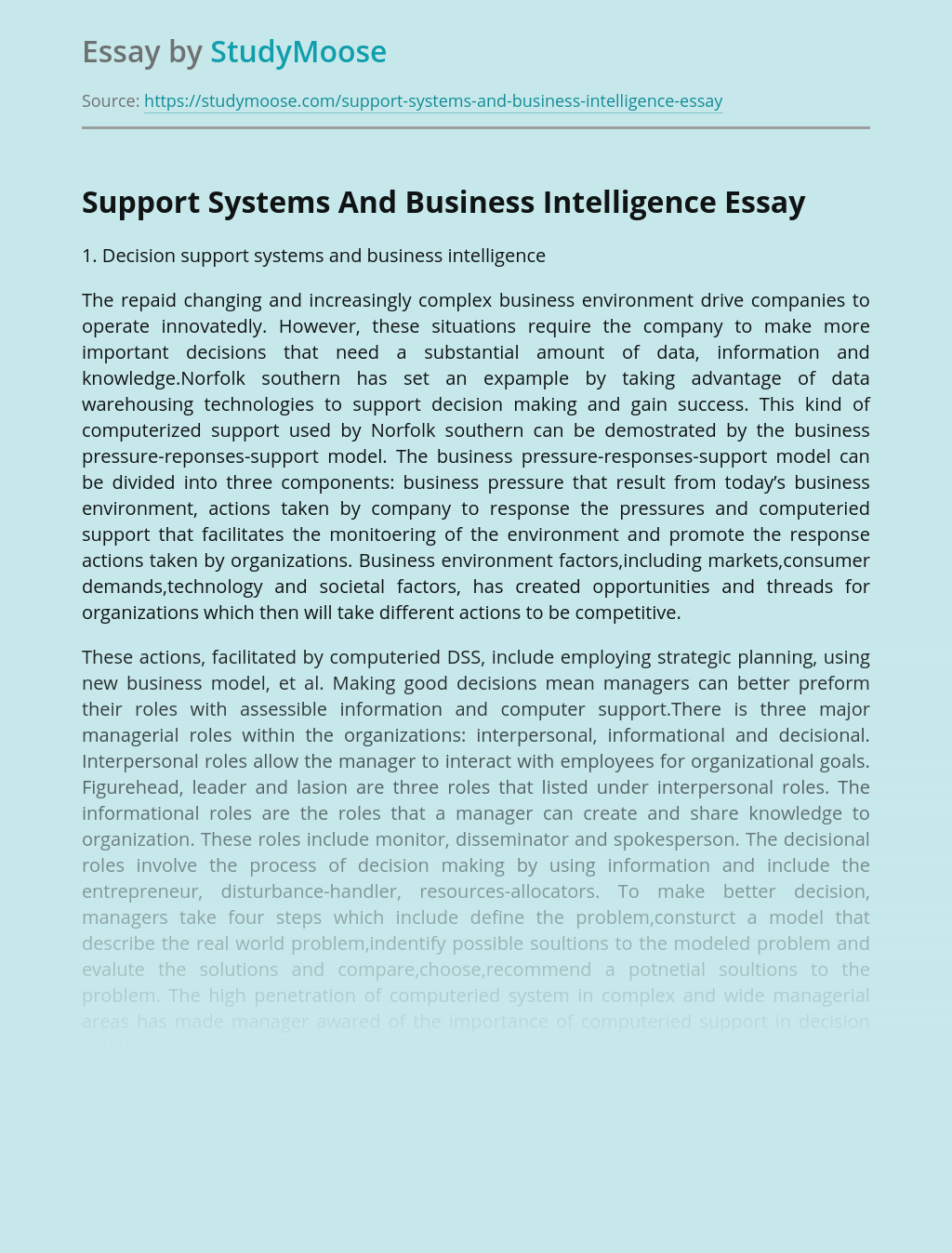 Turn in your highest-quality paper
Get a qualified writer to help you with
“ Support Systems And Business Intelligence ”
Get high-quality paper
Helping students since 2015
Stay Safe, Stay Original