You can’t hide from it even if you’re in space. The melting cheese, the chippy fries, the double cheese burger and a large coke. You love McDonalds, don’t you? Well amazingly if you do, this shock-doc will totally change the way you think. Do you know that McDonalds is mc-killing you? There are only seven items on the McDonalds menu that contain no sugar! Are you still hungry for more? Watch Supersize me and you may need to rethink some thongs.

Don't use plagiarized sources. Get your custom essay on
“ “Supersize me”: Coursework ”
Get custom paper
NEW! smart matching with writer

Isn’t this hilarious, McDonalds are everywhere and there’s only one continent without them Antarctica! I’m sure it won’t be long though. The FAT, the SUGAR, Yuk! What is the point of eating that? Why? You may perhaps ask. Did you know that eating fast food could harm your body by giving you Mc despicable disease such as; Hypertension, Coronary heart disease, strokes, Gall bladder disease and the most common one is Diabetes and many other nuisances in future.

Even worse you could DIE! What is causing this pandemic of obesity?

In this 100 minute Mc shocking yet informative documentary, based on Morgan Spurlock; a director, aged 36, from West Virginia a man who embarks a 30 day McDonalds enlightening experiment has to find out what will happen if he intakes 30 days worth of fast food, and you will be flabbergasted at what happens. If somebody offers him a Supersize meal, he has to take it. Morgan Spurlock has to munch through three supersize meals each day for 30 days.

Despite the fact that doing this could critically influence his health.

Enlisting the help of three highly qualified doctors, lawyers and other professionals there is NO way you could fail to notice anything. The results would be incredibly stimulating as all of a sudden it would adjust the way people imagine. Mainly adolescents and young children. Predominantly because they would become conscious how all the junk food they have been in taking is destructing their bodies and blowing them up like a balloon. Do you think you’ve been brainwashed?

What stirred Morgan Spurlock to take the extreme challenge? Well, Morgan Spurlock was astonished one night whilst hearing about the two teenagers who tried to “sue the bastards” (McDonalds) for making them obese even though they had health problems. However, who would blame them? Spurlock really showed how something as simple as getting a quick Mc lip smacking burger is a life changing result.

Along with his diet, he travels to 20 cities in America and interviews different people about their health. Although, Morgan Spurlock’s girlfriend Vegan Chef is extremely alarmed about his diet and her sexual life. In reality, personal responsibility never ends other than in this case; you’re always choosing to gobble up the food and you never stop until you’re physical condition is in jeopardy.

Did you know that 72% of the population that visit McDonalds are heavy users and 22% are super heavy users. With the truth that 40% of the food in America is fast food, everyone is at high hazard. Conversely, the big fat question is who is to blame this situation? Today, colossal fast food companies are earning much more in relation to healthy food companies. Constantly, this is rising and he wants to encourage people and send out a message out to the nation.

Spurlock keeps us interested by visiting different McDonalds locations to find out nutritional information about each item on the menu and found out that most restaurants don’t carry this information or available to anyone. One of them only had a board of information and it was stored in their basement! McDonalds doesn’t put a real effort to make sure people are awake of what is in their food. However, they don’t force the food down people’s throats! People are ultimately responsible for their own health.

Spurlock researches health and obesity in young people. Inspirations, such as Ronald McDonald, gives advantage from persuading children into coming to McDonalds, by giving away free toys and advertising himself. The more adverts, posters and magazines McDonalds put on the TV the more people are going to know about it. He has turned out to be terrifically popular, some children cannot recognize Jesus, but do know Ronald McDonald!

Continuously, eating he becomes exhausted and after eating three meals a day exclusively from McDonalds he became addicted to the food, got depressed, and his heart and liver suffered. You would without doubt be Mc mad with the outrageous results. He did make horrific choices and even contradicted himself in the movie. Take for example, the gentleman they showed who ate two Big Mac’s a day. The show focused on him eating his 19,000th sandwich. This man was in no means fat. He has eaten McDonalds for years. This made a Mc Colossal upshot on the audience due to the fact that it showed the more you eat the less chance there is for you to survive.

A broad range of dazzling techniques

In order to grasp the audience’s attention, the film uses a broad range of dazzling techniques. Time after time, narration is used. By doing this, it gives an idea to the viewers of what is happening. Narration was used from beginning to the end of the documentary.

What’s more…Rhetorical questions are also asked in the documentary such as; did you know there are over 99 million McDonalds in the world? These questions were asked all of a sudden in the movie which makes it more enchanting. These questions make the audience have a reply in their minds but they cannot answer it out loud.

Awe-inspiring facts keep the audience entertained by telling stuff they were unaware of. For example, when Morgan Spurlock says that the quantity of calories in McDonalds foods is unbelievable. Facts like this one were used throughout the film.

In order to shock the audience, Spurlock uses foul language such as “shit” and “sue the bastards”. This is not suitable for children but grabs the viewer’s attention and makes the film Mc thrilling. The text is short and snappy and is persuasive.

Smartly, Spurlock adds talking heads. It is repeatedly used when the doctors were talking, obviously we did not really need to see their bodies. Talking heads is also used when the 14 year old teenager who is overweight was interviewed. This may perhaps be for the explanation that she was too self cognisant to show herself in the documentary.

Furthermore, we are entertained by popular music. The music fits incredibly within the film and makes it appealing. As well as the director Morgan Spurlock sang songs to add emotional effects. One more technique that worked well with the movie was photo montage. All the photos are exposed at once, rather than showing the photos one by one which would get lacklustre. An example of photo montage was used to show the skinny women and teenagers and the fast food company logos. Even though, narration was used, text was added when a picture was shown to make it seem comprehensible.

Persistently, the audience was alert due to the scandalous things shown. When the man who had the gastric bypass was very thought-provoking.

Various things in the movie were too extended. This is why speed-ups were used. For example, speed-ups was used when Spurlock was eating his meal in McDonalds, it actually took him 45 minutes. But why did we want to see him eating for 45 minutes? So only 2 or 3 minutes of him eating was filmed.

Conversely, cartoons were used in the film and had an immense influence. It enhances the narration and makes it exciting because the text on its own is not eye catching. Cartoon people eating food was shown. A lot of the time clowns were used again and again. There was a miniature clown smoking which could disturb the audience.

Supersize me was filmed in public areas, that’s why the children’s faces were obscured. It makes the audience think that they are ignorant of the identity of the person.

Camera effects also have and huge impact. Close-ups and zoom-ins were used where the camera man focuses on one sickening scene which was when Morgan Spurlock his eating a burger and then does a big pile of sick outside the car window. That was GROSS!

Overall, in making this film Spurlock succeeded in grabbing the audience attention by using a range of film techniques and constantly entertaining the audience throughout the film. It included fabulous facts. Some of you may dismiss this film as you are over exaggerating. Supersize me will absolutely make you question your fast food eating. Hopefully, next time you cue up for a happy meal or a Big Mac think twice before munching it! So what happened to Morgan Spurlock at the end then? Well, grab some popcorn and watch the movie. 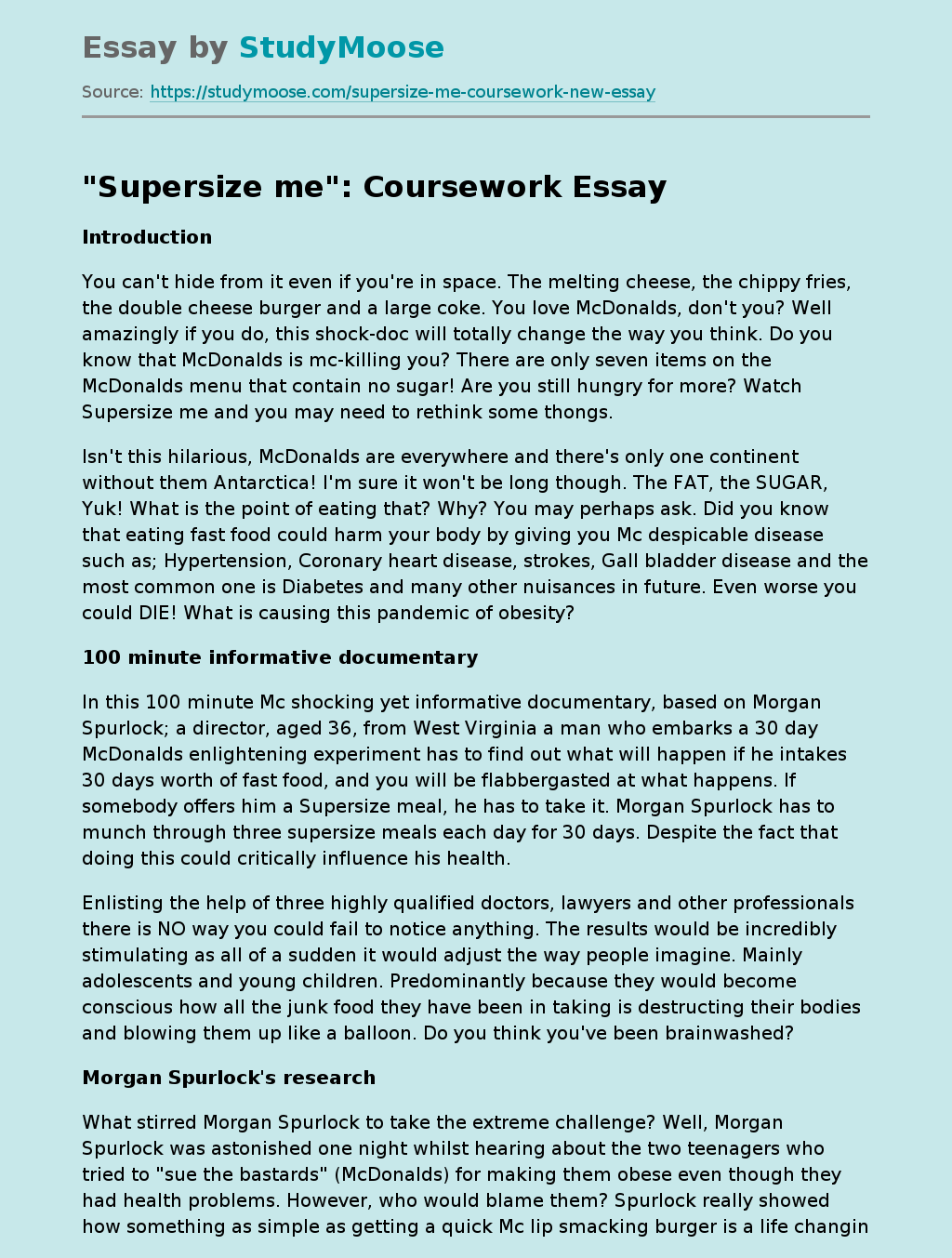