Supernatural elements in the drama macbeth

Macbeth by Shakespeare tells the tale of a great soldier, who is prophesized to become the king of Scotland upon meeting three witches, commits regicide and a chain of crimes, which led to his own tragic demise. The supernatural dominates all aspects of the play of Macbeth. The actions of Macbeth are influenced by his belief in the existence of supernatural powers, which convince him that he can become the king of Scotland. Through his own illusions and Lady Macbeth’s influence over him, he commits a crime that is forever etched in history.

Don't use plagiarized sources. Get your custom essay on
“ Supernatural elements in the drama macbeth ”
Get custom paper
NEW! smart matching with writer

Mistakes after mistakes ultimately become his downfall, which is the main focus of this Shakespearian tragedy. The effects of the supernatural are examined in this analysis of Macbeth’s characterization and the play’s plot and themes.

The involvement of the witches is evidently important in the progression of plot and character in Macbeth. The witches appear in scene one, fore-shadowing the rest of the play. They bring out Macbeth’s inner evil ambition and determine his fate.

“Fair is foul, and foul is fair” (Act 1, Sc. 1, 11), the witches start Act one, Scene one in an ominous atmosphere of thunder and lighting. The bleak atmosphere that starts off the drama supports the horror and tragedy that characterizes the rest of the play.

The audience learns about their intentions of meeting Macbeth and doing harm “when the hurlyburly’s done/ When the battle’s lost and won” (Act 1, Sc. 1, 4-5). Macbeth may win the battle of war, but the witches hint that he will lose the battle against his own fate.

They predict that everything will be changed, moral order will be reversed, and darkness will prevail. The readers get a sense chaos would ultimately decide Macbeth’s outcome.

More supernatural elements are displayed by the inclusion of objects such as the “killing swine” and “in a sieve I’ll thither sail” (Act 1, Sc. 3, 9). Witches in Elizabethan time were believed to carry powerful magic such as casting evil spells on pigs and sailing the sea in sieves. These lines suggest that the witches hold immense powers that can dictate the actions of even a brave hero such as Macbeth. Upon Macbeth and Banquo meeting the witches, Macbeth is informed of the witches’ prophecies of him becoming the thane of Cawdor and the king of Scotland. At first Macbeth doubts the truthfulness of their words but begin trusting their prediction when Ross informs Macbeth that he has been titled the Thane of Cawdor.

The supernatural did not help Macbeth discover his future. Instead, phrases such as “Lesser than Macbeth, and greater/ Not so happy, yet much happier/ Thou shalt get kings, though thou be none.” (Act 1, Sc. 3, 67-69) suggest that the witches do not bring certainty but rather confusion and chaos that perplex and mislead Macbeth. Banquo interoperates the prophecies differently since Banquo realizes the ill intentions of the witches and cautions Macbeth against following people who warship the devil. After the encounter with the witches, Macbeth considers actions to overthrow Duncan and to take over the throne of Scotland with the aside, “If chance will have me King/ Why, chance may crown me/ Without my stir. (Act 1, Sc. 3, 56-58)

Supernatural elements in the drama macbeth. (2016, May 12). Retrieved from https://studymoose.com/supernatural-elements-in-the-drama-macbeth-essay 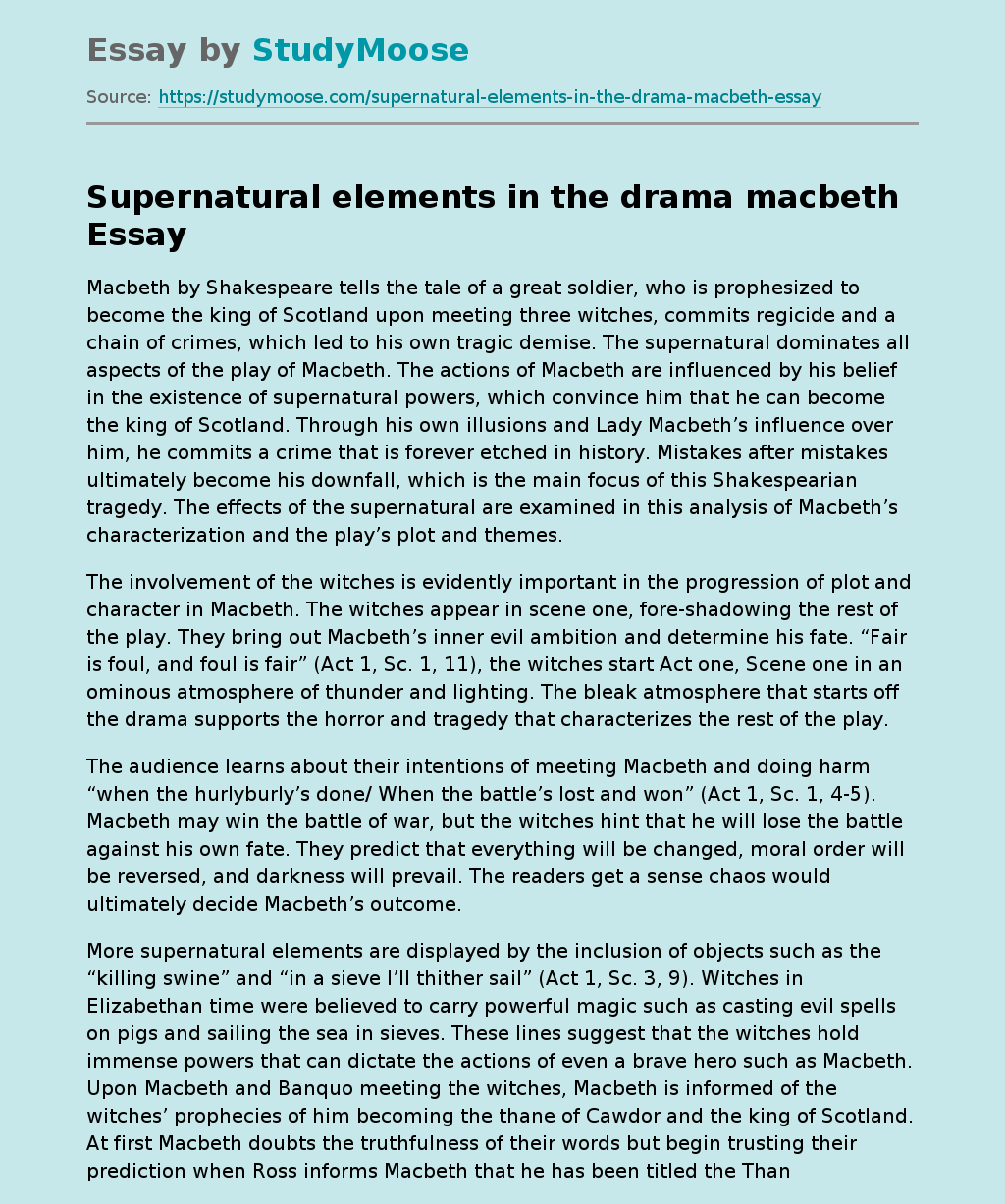