KEY ISSUE OR DECISION THAT MUST BE MADE

Should Superior Supermarkets implement the everyday low pricing strategy? If so, should this strategy be adopted across-the-board for all products or just certain categories?

BASIC FACTS OF THE CASE

Superior Markets is a division of Hall Consolidated, a privately owned wholesale and retail food distributor. Hall Consolidated was formed in 1959 and initially included a number of wholesale food operations and produce companies. The Superior Supermaket chain was acquired in 1975. Superior operates conventional supermarkets in trade areas that serve small cities and towns in the South Central United States.

Don't use plagiarized sources. Get your custom essay on
“ Superior Supermarkets’ Strategy of Lowing Prices ”
Get custom paper
NEW! smart matching with writer

Centralia is the primary trade area in Scott County, which is located in central Missouri. Four grocery chain stores accounted for 85% of all food sales in Centralia in 2002. Three of the chains – Harrison’s, Grand American, and Missouri Mart – operated one store in Centralia, and Superior Supermakets operated three.

Company officials believed that Superior stores offered a more limited variety of merchandise than the major competitors but that Superior carried high-quality merchandise, particularly in grocery items and produce.

In mid-2002, Hall commissioned an independent marketing research firm to conduct a series of studies for the Superior stores in Centralia. The first study consisted of a telephone survey of 400 Centralia residents, who were asked to comment on the principal strengths of the Superior stores, Missouri Mart, Grand America, and Harrison’s. More than 30% of the interviewers considered Superior’s prices “above average.

” In contrast some 20% of the respondents thought the prices at Missouri Mart and Grand America were below average. Harrison’s was thought to have the lowest everyday prices.

The four major aspects that determined store choice were Price, meat, Produce and Shopping convenience. Superior appears to be the winner on shopping convenience. Focus group participants from all parts of Centralia considered Superior to be a good neighborhood store. The “Superior Supermarkets = Superior Value” advertising was questioned given the perceived higher grocery, meat and produce prices.

In a second study involving personal interviews shoppers emphasized that lower prices and greater variety were needed. Appearance and cleanliness, friendliness, service and convenient to home or work were liked most by shoppers.

James Ellis has several options and several decisions he would have to make in regards to the implementation of the Everyday Low Pricing strategy. If the strategy is implemented James Ellis will have to make decisions regarding some key issues:

After reviewing the available consumer research and determining that Superior could lose market share in Centralia due to the price differential, I would suggest that James Ellis implement the everyday low pricing strategy. The pricing strategy should be implemented as part of a broader store positioning strategy and supported with advertising. It would also be advisable for Superior to conduct further market research and determine exactly how price knowledgeable their customers are and what product categories they are most price-conscious of. I believe that it would be most profitable if Superior limited the implementation of the everyday low pricing strategy to only merchandise that shoppers are most price conscious of. It is also important to recognize that Superior cannot “outprice” Harrison’s and it is therefore important that Superior consider it’s advantage in the shopping convenience category and determine the best price changers accordingly.

JUSTIFICATION FOR YOUR CHOICE

According to Randall Johnson who proposed the everyday low pricing strategy the two main reasons this strategy should be implemented are as follows:

Sales in Centralia were already down 3% in the first quarter of 2003 compared with budgeted sales goals. This decline, following a slower than expected fourth quarter of 2002, could indicate the beginning of a trend. Everyday low pricing has to be used by all stores in a trade area, otherwise the stores positioning or image could be confused. It is also recommended that the everyday low pricing strategy be implemented to limited categories of merchandise.

Previous research indicates that implementing the strategy to the grocery items (including dairy items) and seasonal and general merchandise (including health and beauty care items, would be the most profitable to the company. These categories represent 57% of Superior’s sales in Centralia and everyday low pricing there should convey the right image. Another important aspect in implementing the strategy is how much the price should be lowered. Since it is impossible to “outprice” completive stores such as Harrison’s it would be most profitable for Superior to keep their prices somewhat higher in exchange to the shopping convenience they offer.

Also the implementation of everyday low pricing also has the advantage of reducing operating costs. This can happen in two ways:

It can be derived from previous experience that Superior would be able to get an additional 50 basis points (.5% of sales) due to lower inventory and handling costs.

KEY PERSON AND HIS / HER POSITION IN THE ORGANIZATION

To deal with the following issues:

Bad company image being portrayed as they do not deliver what they advertise, ‘superior value’.

Quality of meat and produce is not satisfactory on a competitive level and quality of both is a major customer attraction as is indicated in the consumer research.

Dealing with the competitors who are offering more variety at a cheaper price.

WHY DO WE HAVE TO DEAL WITH THIS ISSUE NOW

Sales for superior supermarkets is already falling; in the fourth quarter of 2002 sales were lower than sales for the same quarter in 2001. The population is turning into more price conscious and hence the prices must be reconsidered and restructured. Not doing so may result in superior market losing some market share.

BY WHEN MUST THE KEY PERSON MAKE THIS DECISION? (INCLUDE YOUR REASON FOR THIS TIME FRAME)

The decision must be made as soon as possible since the competitive super markets are already offering lower prices and slowly increasing their sales, a delay in the decision will just give the competition more time to increase sales even further and may be even take some of superior markets market share.

STAKES: WHAT DOES THE ORGANIZATION STAND TO GAIN OR LOSE IF IT MAKES A GOOD OR BAD DECISION?

POTENTIAL BENEFITS OF A GOOD DECISION

POTENTIAL COSTS OF A BAD DECISION

QUESTIONS YOU SHOULD ASK YOURSELF AS YOU COMPLETE THE LONG CYCLE 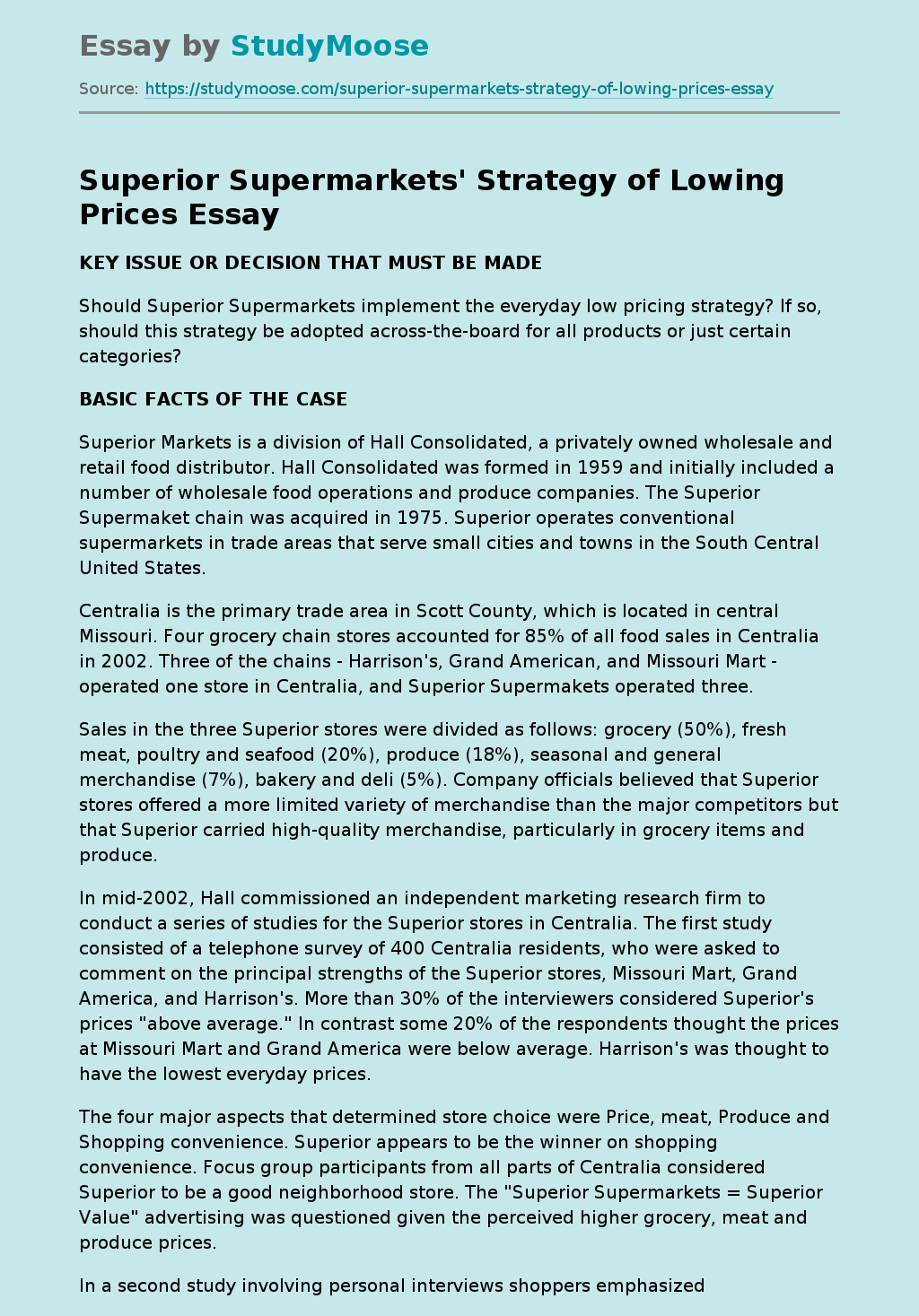