A selfish giant had a beautiful garden. He went away for a long time, and children began to play in his garden. When he came back, he told the children to go away. The giant built a high wall. No one could go into the garden.

Spring could not enter the garden. Only Winter could enter it. There were no flowers or birds. Then, things changed. The children secretly came back into the garden, and they brought Spring with them. The flowers and birds came back.

Don't use plagiarized sources. Get your custom essay on
“ Summary The Selfish Giant ”
Get custom paper
NEW! smart matching with writer

One tree was still covered in ice. A little boy was crying under it because he could not get up in the tree. The giant picked the boy up and put him in the tree. Then that tree had flowers, too.

The giant was not selfish anymore. He let the children come into his garden. But the little boy the giant had helped did not come back to the garden. The giant got old. One day, the little boy came back to the garden. He had blood on his hands and feet. The giant was angry and wanted to kill the person that hurt the boy. The boy told the giant that the blood was from his love. He asked the giant to come to Heaven with him.

The giant died. The children found his body covered in flowers. The little boy took the giant to Heaven.

2. Section Summary ► Pages 6-11: The selfish giant did not want children to play in his beautiful garden. He built a high wall to keep them out.

No one could go into the garden except for Winter. It was very cold and lonely. Then, things changed.

3 ► Pages 12-15: The children secretly came back into the garden. They brought Spring, and Spring brought flowers and birds. The garden was beautiful again. The giant was not selfish anymore. He let the children play in his garden, but he noticed that one little boy did not come back.

► Pages 16-18: The giant got old. One day, the little boy returned to the giant’s garden. The boy had blood on his hands and feet. He said it was from his love. He invited the giant to come to his garden. The boy’s garden was Heaven. The giant died, and the boy took him to Heaven.

B. Background and Themes ★ Selfishness: People who are selfish do not want to share their things with others. They want to keep everything for themselves. But when they do that, they quickly find themselves all alone. The giant was selfish. He didn’t want to share his garden with the children. He sent them away. But when he sent them away, he was left with nothing but a cold, ugly garden that he could not enjoy.

★ Love: Our lives are empty and lonely without love. Love brightens our world and brings happiness to our lives. When the giant did not have love, his garden was cold and lonely. When he let love in and loved others, his garden became beautiful and full of life. ★ Jesus: Jesus loves people unconditionally. People treated him badly, but he gave his life so others could be saved. He is the way to Heaven. The little boy in the story is Jesus. The blood on his hands and feet was from where he was nailed to the cross. He loved people so much that he died for everyone.

★ Seasons: Spring is a season of new life. Winter is a season of death. When Spring was allowed in the giant’s garden, there were many birds and flowers. When Spring was not allowed in, Winter took over, and the garden was cold and lifeless. ★ Children: Children are a blessing. Their innocence and love bring people a lot of joy and happiness. The giant learned how special children are. When he let them play in his garden, his life was full of love. The little boy showed the giant love, too. He returned to the garden and took the old giant to Heaven with him. 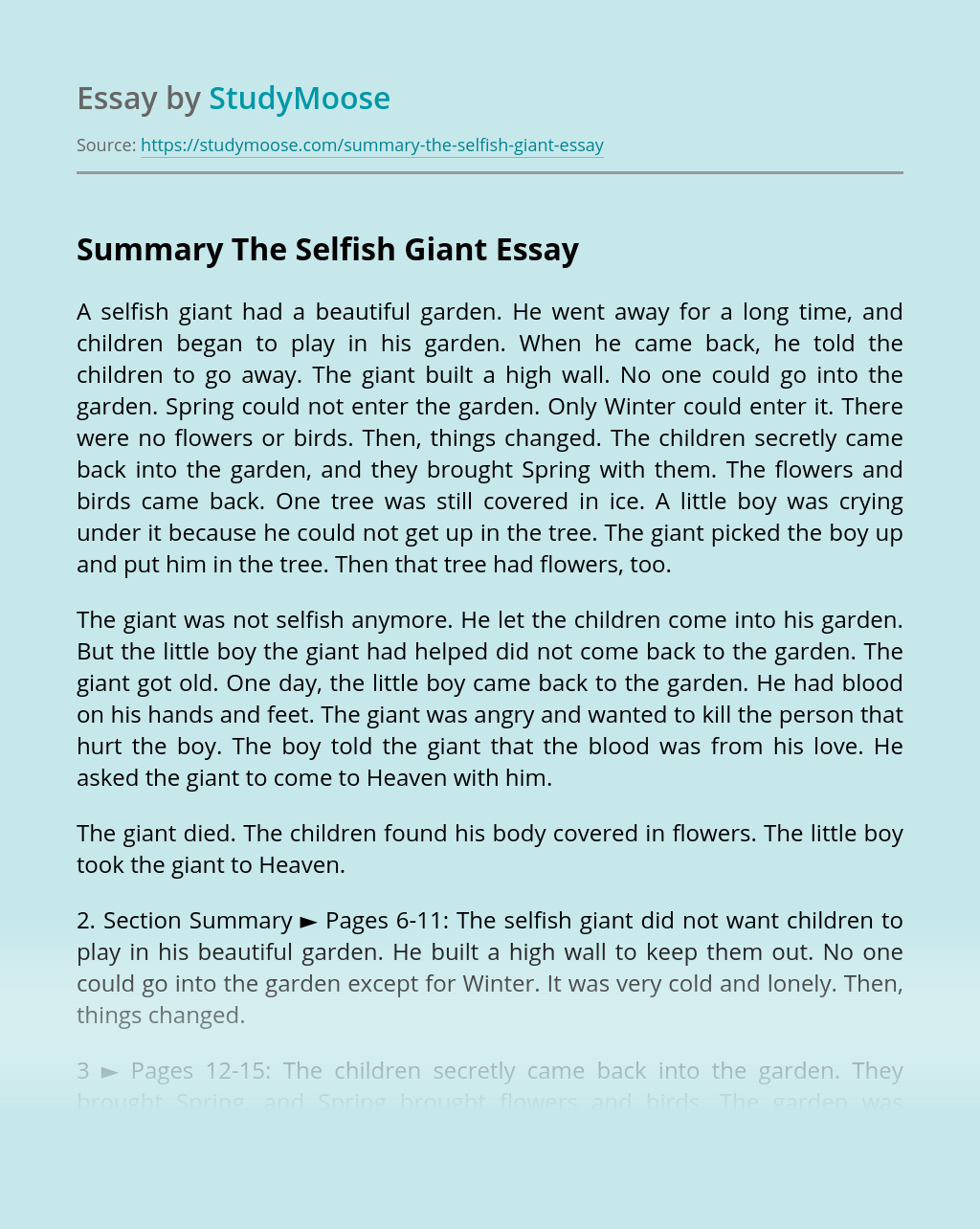