Ralph Ellison starts his novel, Invisible Man, with the narrator: Invisible Man, revealing that he is “invisible” and is hibernating underground in his “hole.” Starting in chapter one, the IM returns to the beginning of his story, 20 years earlier. He begins just after high school and jumps to when he was going to give an important speech to the town’s leading white figures. He is made to watch a white stripper dance, forced into a battle royal, and shocked by an electrified carpet before his speech.

Don't use plagiarized sources. Get your custom essay on
“ Summary of Ralph Ellison’s Invisible Man ”
Get custom paper
NEW! smart matching with writer

After he finally gives the heavily plagiarized speech he is awarded a briefcase and a scholarship to a southern Negro College. The IM then tells of his time spent chauffeuring Mr. Norton around the college, and how he ends up taking him to Trueblood’s cabin where they hear the story of how Trueblood slept with his own daughter. They leave very upset and head to the Golden Day tavern to get Norton a drink.

A friendly doctor helps the IM and he, along with Norton, barely escapes the fighting in the tavern. Dr. Bledsoe, the college’s president is furious with the IM and, after lecturing him on power and submission, decides to expel the IM from the college.

The IM is sent, with useless letters of recommendation, to New York, where he finds himself looking for work in Harlem. The IM meets with the son of a trustee who exposes how Bledsoe betrayed him and the IM leaves infuriated and still without a job.

Using the trustee’s name, the IM finds temporary work at the Liberty Paint plant. He mixes paint for one man but is quickly dismissed for independent thought and moved down to the basement with Lucius Brockway. He is lectured once more on power and society’s need for blacks just before getting in a fight with Brockway. An explosion triggered by Brockway covers the IM in white paint and sends him to the company hospital. The IM undergoes interrogations, is “treated” with electroshock therapy, and gets fired from the company. In his sickly state, the IM is taken to the home of Mary Rambo whom he eventually rents a room from.

When he stumbles upon an eviction taking place in Harlem he is moved and upset by the scene and goes so far as to give a public speech about how the people should maintain composure and the shameful state of affairs this eviction is exposing. The crowd is moved by his words and starts a small-scale riot that the IM abandons for his own safety. A man named Brother Jack follows the IM away from the scene and offers him a job in his organization. Without much thought the IM becomes deeply involved with the communist party faction residing in Harlem and, after months of training, is appointed chief spokesman of the Harlem District. The IM and his new companion, Brother Tod Clifton, meet stiff opposition from Ras the Exhorter and his Black Nationalist group. The IM receives a warning letter about his success in the community is almost too great, and, in the very same chapter, has his abilities brought into question by another member. He is demoted and moves downtown to speak on the “Woman Question.” After his first lecture, he is seduced by the wife of a Brotherhood supporter. He leaves her apartment extremely worried but is reassigned to Harlem the next day. Upon his return, the IM is informed of Clifton’s disappearance and how the community is losing interest in the Brotherhood. The IM finds Clifton selling dancing paper dolls named Sambo and is horrified.

The IM then witnesses Clifton being shot by a police officer, and decides to use his funeral as a means of helping the Brotherhood. The IM gives the eulogy himself and tries to humanize Clifton while also exposing the oppressive times that plague the community and inspiring the people to action. The Brotherhood calls the IM into a meeting and explains that he was wrong in holding the funeral for a “traitor” and that he must not abuse his power. He begins to question the Brotherhood’s methods and leaves under the impression that the others cannot actually see him for who he is. The IM narrowly escapes a beating from Ras’s men and dons a hat and dark green glasses to explore his invisibility. He is mistaken for a shady character named Rinehart several times and discovers that people can truly be invisible in society.

At the end of chapter 23, the IM is bound and determined to follow his grandfather’s advice and “yes” the Brotherhood to death. He tries to solicit information from the wife of a committee member and ends up drawn into fulfilling her sexual, and exceedingly stereotypical, fantasies. He is instructed to go to Harlem, but when he arrives he discovers massive riots already in progress. He is drawn in with a party of looters who burns down their own tenement building. He realizes while running that the riots were planned by the Brotherhood and that he helped them to come about. The IM finds himself face to face with Ras in the street and, after a brief verbal exchange, he hits Ras in the mouth with a spear and runs off once again. The IM is “baptized” by a broken water main before falling down a manhole into what would become his underground lair. The novel ends where it began with the IM underground giving his final thoughts and saying that he is eventually going to leave the “hole” and fulfill his social responsibility of defining himself. 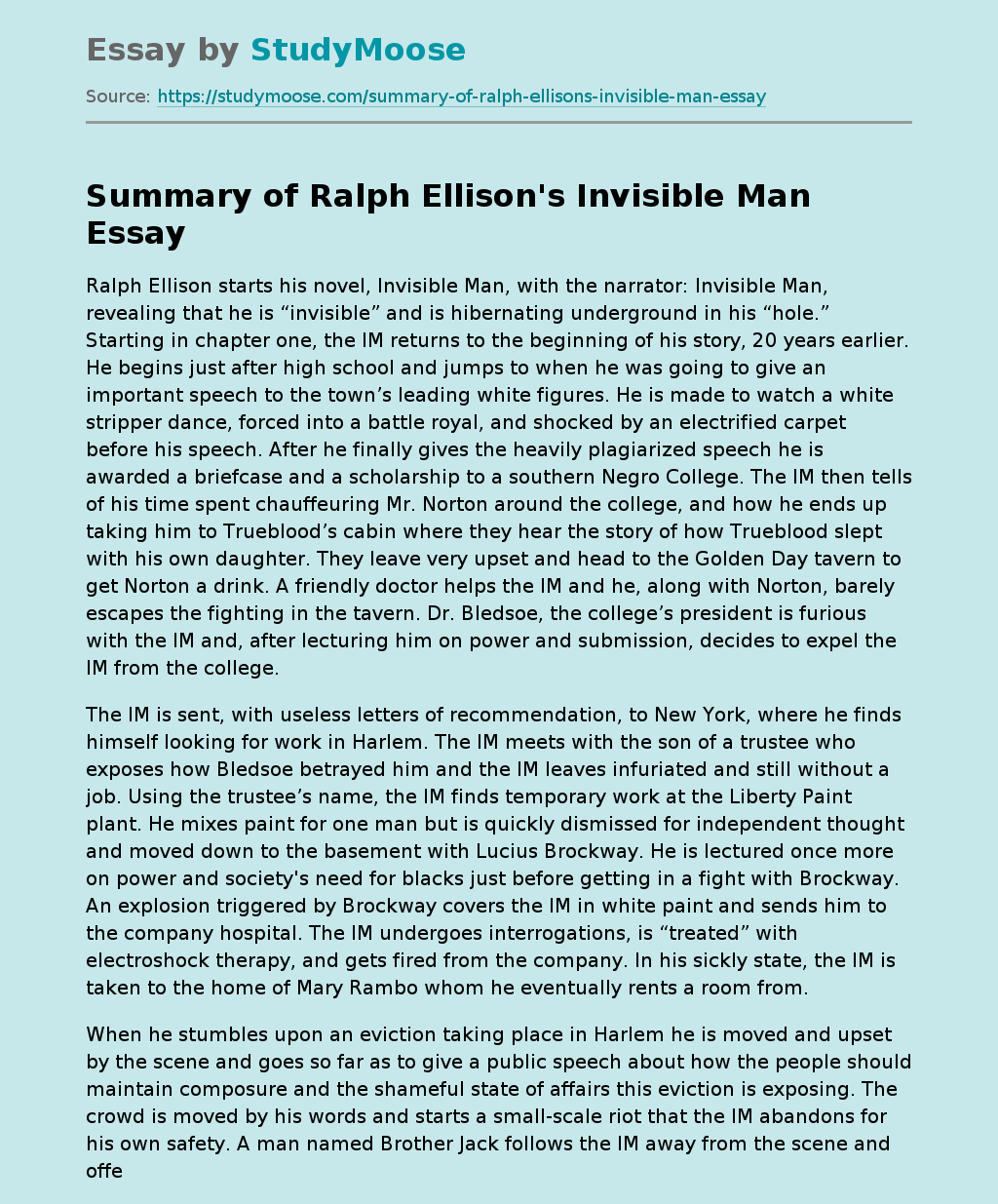