Summary of History of Graphic Design by Meggs

– From the early Paleolithic to the Neolithic period (35,000 BC to 4,000 BC), early Africans and Europeans left paintings in caves, including the Lascaux caves in Southern France.
– Early pictures were made for survival and for utilitarian and ritualistic purposes.
– Petroglyphs are carved or scratched signs on rock.

– These images became symbols for what would be the first spokenlanguage. – Cuneiform – Wedged shaped writing, created in 3000BC. Started as pictographs.
– With the discovery of cuneiform, there was a knowledge explosion, where libraries were organized filling with tablets about religion, mathematics, and history.

Turn in your highest-quality paper
Get a qualified writer to help you with
“ Summary of History of Graphic Design by Meggs ”
Get high-quality paper
NEW! AI matching with writer

Writing enabled society to stabilize itself, and laws were created.

– Two by-products of the rise of village culture were the ownership of property and the specialization of trades.
– Egyptians used hieroglyphics.

– The Rosetta Stone, which was created in 196 or 197 BC, contains writing in Egyptian Hieroglyphics, Egyptian Demotic Script, and Greek. The major deciphering of the stone was done by Jean-Francois Champollion. – As hieroglyphics presented more opportunities than cuneiform, the language was used for commercial documents, poetry, myths, etc… – Papyrus paper was a major step forward in Egyptian visual communication.

– The Egyptians were the first people to produce illustrated manuscripts in which words and pictures were combined to communicate information. – Eventually, Papyrus was used for funerary purposes.

– The majestic Egyptian culture survived for over 3000 years. Hieroglyphics, papyri, and illustrated manuscripts are its visual communications legacy.
Chapter 2: Alphabets
– The hundreds of signs and symbols required by cuneiform were replaced by 20 or 30 easily learned signs.
– The creation of the alphabet may have been an act of geography.

– The oldest known examples of the Early or Old Hebrew alphabet date from around 1000BC.

– The design of Arabic letters changes with the position within a word. – After the Latin alphabet, Arabic is the most widely used alphabet today. – The Aramaic alphabet is believed to be the predecessor of the scripts used in India.

– The Greeks adopted the left-to-right reading pattern we use today. – In 500BC, Democracy was adopted in Greece. Visual communications played a secondary role in the oral culture of the Greek city-state. – The alphabet played a role in Greek democracy; it enabled the use of allotment tokens when selecting citizens by lot for public service. – Alexander the Great smashed through the power of the Persian Empire. Reading and writing had become more important by this time, because the expansion of information and knowledge exceeded the ability of oral communication.

– Most of the knowledge documented by the Greeks was lost due to the fragile nature of papyrus scrolls and the damp Greek climate. – After the death of Alexander the Great, Greek civilization and its alphabet became influential throughout the whole world.

– The Latin alphabet came to the Romans from Greece by way of the ancient Etruscans.
– The letters Y and Z come from the Greek alphabet.
– Roman brush writers wrote notices and political campaigns on walls. – Around 190 BC, parchment paper, made from the skins of domestic animals, came in to use.
– Vellum, the smoothest form of parchment, is made from the skin of newborn calves (LOL).

– The codex replaced the scroll, as it consisted of stacked pieces of paper much like a modern book.
– Graphic symbols became a representation of religious belief during the Roman Empire.
– Rome’s legacy includes architecture, engineering, language, law and literature.

Chapter 3: The Asian Contribution
– Chinese calligraphy is used more often today than any other visual language system.
– Chinese language is purely visual, and not alphabetical.

– Chinese is thought to have been invented by Tsang Chieh, who was inspired to invent writing after studying the claw marks of birds. – Chinese characters are logograms meaning that each character represents an entire word (like $ = dollar).

– Paper, a Chinese invention, is attributed with the high government official Ts’ai Lun.
– Ts’ai Lun’s method of making paper was unchanged until nineteenth century England.
– After the invention of paper, the Chinese also began to use it for wrapping presents, wallpaper, napkins and toilet paper.

– Printing was invented by the Chinese.
– The first method of printing was block printing, using stamps. – Rubbings were also made by carving words into stone, then inking the stone and making a print on a piece of paper. This is also known as relief printing.

– The oldest surviving printed manuscript is the Diamond Sutra. – Around 1000AD, paper money was printed.
– An early form of Chinese graphic design was playing cards. – In 1045 AD, Chinese alchemist Pi Sheng developed movable type, using clay and glue.
– Because types are not moveable, characters were organized by rhyme. – Moveable type never replaced the handcut woodblock of the orient. – The invention of paper and printing arrived in Europe just as the Renaissance began.

– After the Western Roman Empire collapse in 476 AD, an era of dislocation and uncertainty ensued.
– The thousand year medieval era lasted from the fifth century fall of Rome until the fifteenth century Renaissance.
– In the 700’s, with the exception of Celtic pattern-making, book design and illumination had sunk to a low in most of Europe.
– Many people feared that the year 1000 AD would be the end of the world. – On New Years Ever, 999 AD, many people stripped naked, and lay on their roofs waiting for final judgment.
– By 1150 AD, Bibles were becoming massively produced.
– During the 1200’s, the rise of universities created an expanding market for books.
– The Book of Revelation had a surge of unexplained popularity in England and France during the 1200s.
– The Douce Apocalypse written in 1265 AD, is one of the many masterpieces of Gothic Illumination.
– The Qu’ran is one of the most printed Islamic works ranging from pocket sized editions, to imperial works.

– Figurative illustrations were not utilized because Islamic society embraced the principle of aniconsim, the religious opposition to representations of living animals.
– AS the medieval era yielded to the Renaissance, illuminated manuscripts became increasingly important.
– The Limbourg brothers were renowned print artists.

– Woodblock printing soon came to Europe after 1416.
– Illuminated manuscripts continued to be made throughout the 15th century. Chapter 5 – Printing Comes to Europe
Xylography: the technical term for the relief printing from a raised surface that originated in Asia.

Typography: the term for printing through the use of independent, movable, and reusable bits of metal, each of which has a raised letterform on its top. Typographic printing allowed the economical and multiple production of alphabet communication.

• Knowledge spread quickly and literacy increased because of this invention. Several factors created a climate in Europe that made typography possible: • Demand for books became insatiable.
• Emerging literacy: middle class and students created a huge new market for reading material.

• The process of bookmaking took too long (scribes = slow), and the costs involved were too high (sheep skin parchment = redonks expensive, y0). Watermark: a translucent emblem produced by pressure from a raised design on the mold and visible when the sheet of paper is held to the light. • Was used in Italy by 1282.

• Playing cards = first graphic designs to move into an illiterate culture. o Games to kings now played by the working class and peasants.
• First known European block printings with a communications function were devotional prints of saints. The Ars Moriendi: this was a 13 page piece of propaganda from the Church, but to the average citizen it seemed like something meant to help individuals cope with death. à Gutenberg: resolved the technical, organizational, and production problems that had plagued earlier typographic printing efforts.

Summary of History of Graphic Design by Meggs. (2016, May 31). Retrieved from https://studymoose.com/summary-of-history-of-graphic-design-by-meggs-essay 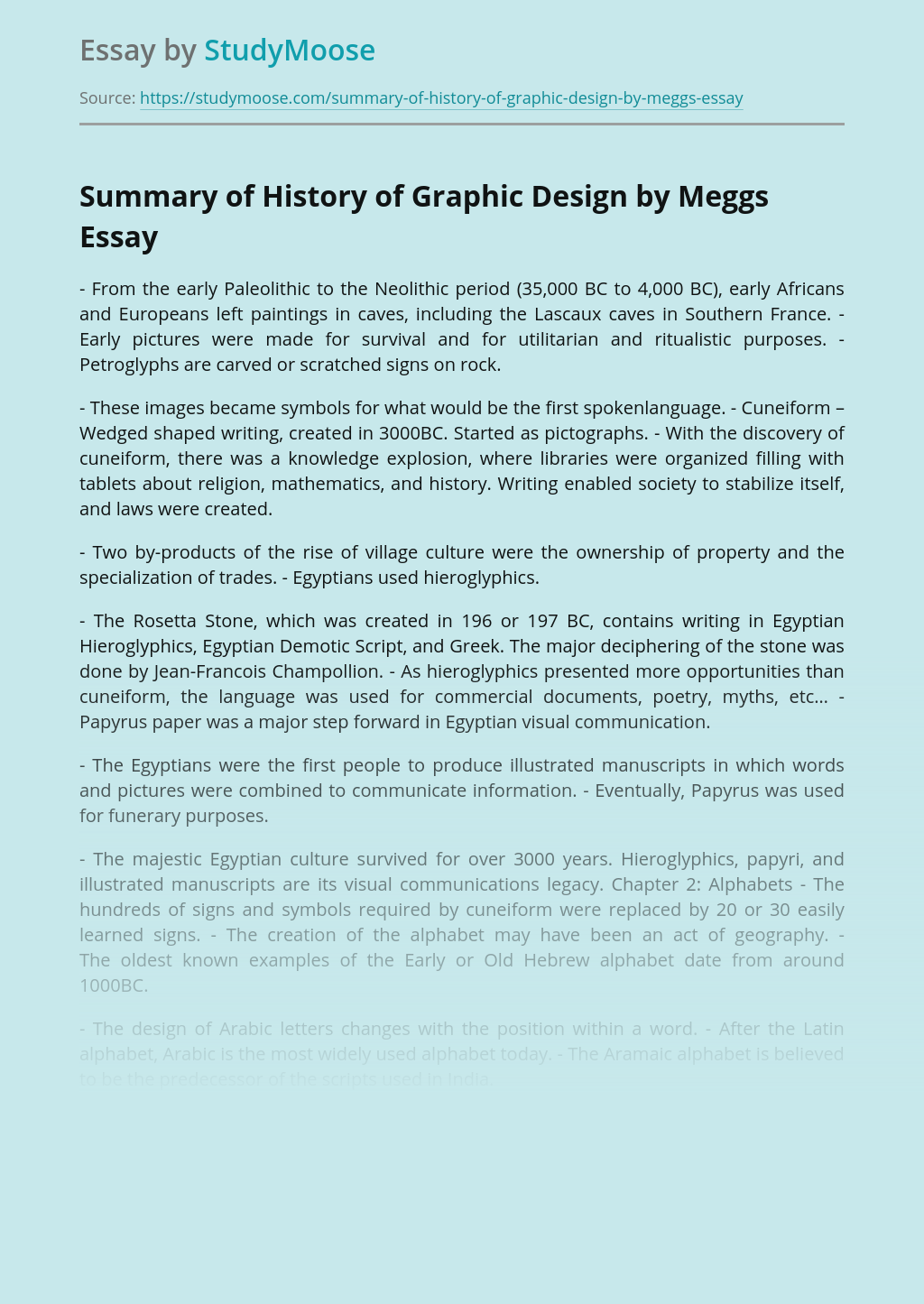 Turn in your highest-quality paper
Get a qualified writer to help you with
“ Summary of History of Graphic Design by Meggs ”
Get high-quality paper
Helping students since 2015
Stay Safe, Stay Original