Summary of Evil and Atheism

In William L. Rowe’s paper “The Problem of Evil and Some Varieties of Atheism” he sets out to accomplish two main goals. The first goal is directed toward theists, while the second attempts to reach the very wellspring of an atheist’s heart. Foremost, Rowe sets out to show that there is “an argument for atheism based on the existence of evil that may rationally justify someone in being an atheist” (335). After he has effectively addressed this first issue he moves on to try and convince the atheist that in light of all the evidence that theists are rationally justified (just as much as the atheist) and therefore that atheists should subscribe to what Rowe calls “friendly atheism.

Don't use plagiarized sources. Get your custom essay on
“ Summary of Evil and Atheism ”
Get custom paper
NEW! smart matching with writer

Rowe begins his paper by distinguishing two types of theists as well as two types of atheists. He makes a distinction between broad and narrow forms of each particular position. For Rowe a broad theist is someone who believes in a divine being while a narrow theist is someone who believes in an omniscient, omnipotent, eternal, supremely good, being who created of the world (335).

In developing his argument for atheism Rowe begins by pointing out that our world contains a considerable abundance of intense human and animal suffering.

1. “There exist instances of intense suffering which an omnipotent, omniscient being could have prevented without thereby losing some greater good or permitting some evil equally bad or worse.

2. An omniscient, wholly good being would prevent the occurrence of any intense suffering it could, unless it could not do so without thereby losing some greater good or permitting some evil equally bad or worse.

3. There does not exist an omnipotent, omniscient, wholly good being (336).

The structure of the argument, according to Rowe, is valid; therefore if someone were justified in believing its premises then atheism is justified.

Rowe supports the second premise first because “this premise (or something not too distant from it) is, I think, held in common by many atheists and theists” (336). It is notable that Rowe draws attention to the fact that one need only state a necessary condition for a omniscient, wholly good being failing to prevent suffering and not a sufficient condition in order for this premise to hold.

Rowe supports the first premise by inventing an analogy that will indeed outlive Rowe himself…the case of the fawn (as it has come to be known). The analogy simply put is suppose in a distant forest lightening strikes and starts a forest fire. During which a fawn is trapped, becomes horribly burned, suffers, and dies several days later. This is used by Rowe to show that “since the fawn’s intense suffering was preventable and, so far as we can see, pointless, doesn’t it appear that premise 1 of the argument is true” (337). He admits that the case of the fawn doesn’t prove the truth of the premise (337), but proof was never his aim, only rationality. In fact Rowe says that it is beyond belief to think that none of the suffering in the world could have been prevented without losing a greater good or permitting an evil at least as bad (338).

Using this technique it is impossible to question the validity of one form without calling into question the validity of the other. Rowe also includes two other possible objections to his argument but believes them both to be inadequate. One is to show that the first premise is defective while the other is to defend the problem of evil by arguing that it exists because of free will.

He then gives another exceptional example to demonstrate this fact. To sum up his example you are in the middle of the Pacific Ocean bobbing up and down in a life preserver after a plane crashed that you had boarded earlier. After an extensive search the rescuers come up with the declaration of no survivors. Your friends back home are therefore justified in believing that you are dead; so too is the theist, according to Rowe, justified in believing that God exists. Friendly atheism is only a significant position if it answers the question of “whether some people in modern society, people who are aware of the usual grounds for belief and disbelief and are acquainted to some degree with modern science, are yet rationally justified in accepting theism… in the affirmative” (340).

Rowe ends his paper with somewhat of a petition for us to be more open-minded in how we approach philosophy. He says that philosophers who are atheists hold that there are no good reasons for theism and theists reject that the problem of evil is really a problem at all. Rowe has built a bridge between theism and atheism so that we may cross and intermingle while still holding on to our pride and personal belief’s (regardless of how lacking in virtue they each may be). Now – much like the boys and girls at a junior high school dance – all that is left is for the first person to cross and start the conversation while the rest of us watch anxiously to see if he is slapped or kissed.

Summary of Evil and Atheism. (2016, Jul 10). Retrieved from https://studymoose.com/summary-of-evil-and-atheism-essay 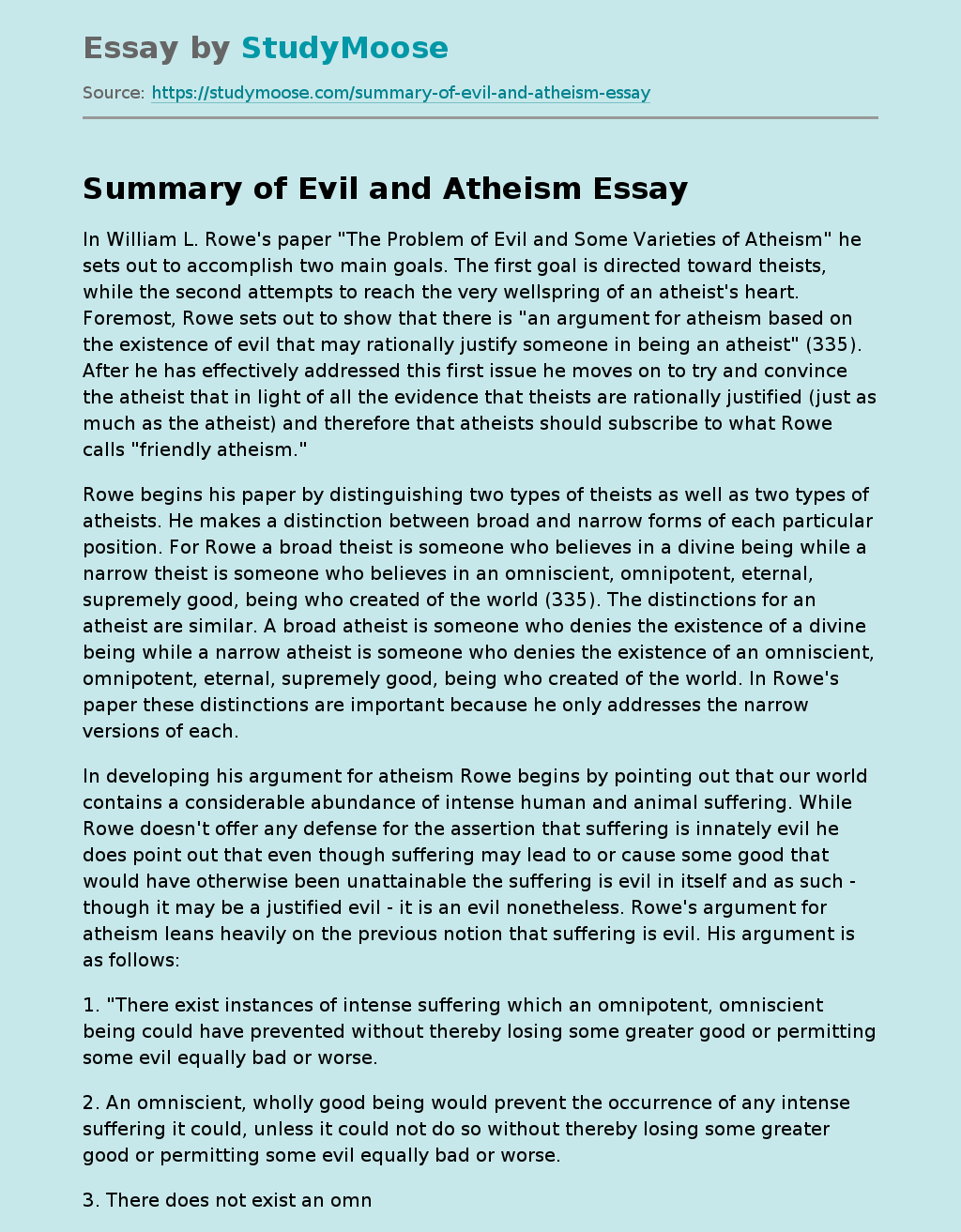