Summary of Anton Chekhov’s “The Bet”

The story opens on a dark autumn night. An old banker was quite restless in his study recollecting a party that happened fifteen years ago. In that party, the guests were having a discussion regarding capital punishment. While most of the guest disapproved of the death penalty, the banker was of the opinion that if capital punishment kills a man at once, life-long imprisonment kills him slowly. Then a young lawyer of twenty-five years of age, who was amoung the guests was asked to comment, who preferred life imprisonment to the death penalty because he felt that living anyhow is better than not at all.

Don't use plagiarized sources.
Get Your Custom Essay on Summary of Anton Chekhov’s “The Bet” Just from $13,9/Page

The discussion heated up and the banker betted two millions for the lawyer to stay in solitary confinement for five years. The lawyer accepted the bet not for five years but for fifteen years. And accordingly he was lodge in an outhouse in the garden of the banker. The conditions were that he would not see any human beings, hear human voices nor receive letters or newspapers.

But he was allowed to have musical instrument and books. He was also allowed to drink wine and smoke. Any slightest attempt on his part to violate these conditions would release the banker from paying the money. During the first year of confinement, the lawyer suffered from severe loneliness and depression. He gradually stopped drinking and smoking. His reading materials in the first year included novels with complicated love stories, sensational and fantastic stories. In the second year, he stopped playing the piano. But during the fifth year, he again asked for wine. In the sixth year, he started reading language, philosophy and history. At the tenth year, the lawyer read only the gospels of The New Testament of The Bible. In the last two years, he would ask for books on natural sciences, sometimes Byron or Shakespeare; sometimes chemistry or a manual of medicine or philosophy or theology. All these came to the banker’s mind that is not very successful in his business now after fifteen years.

He was terrified with the thought that next morning, the lawyer would be a free man and he would have to give the lawyer a sum of two millions and be ruined himself. There upon he thought of a treacherous plan. He took the key and went to the lodge with the intention of killing his lawyer prisoner. But to his utter surprise, he saw a note on the table as the lawyer was coolly sleeping which read amoung other things that he had renounced the two millions and he would break the contract by feeling out of the room before the stipulated time. This shocked the banker to his bones and he returned to his room crying only to get the news from the watchman that the lawyer had fled.

Summary of Anton Chekhov’s “The Bet”. (2017, Jan 09). Retrieved from https://studymoose.com/summary-of-anton-chekhovs-the-bet-essay 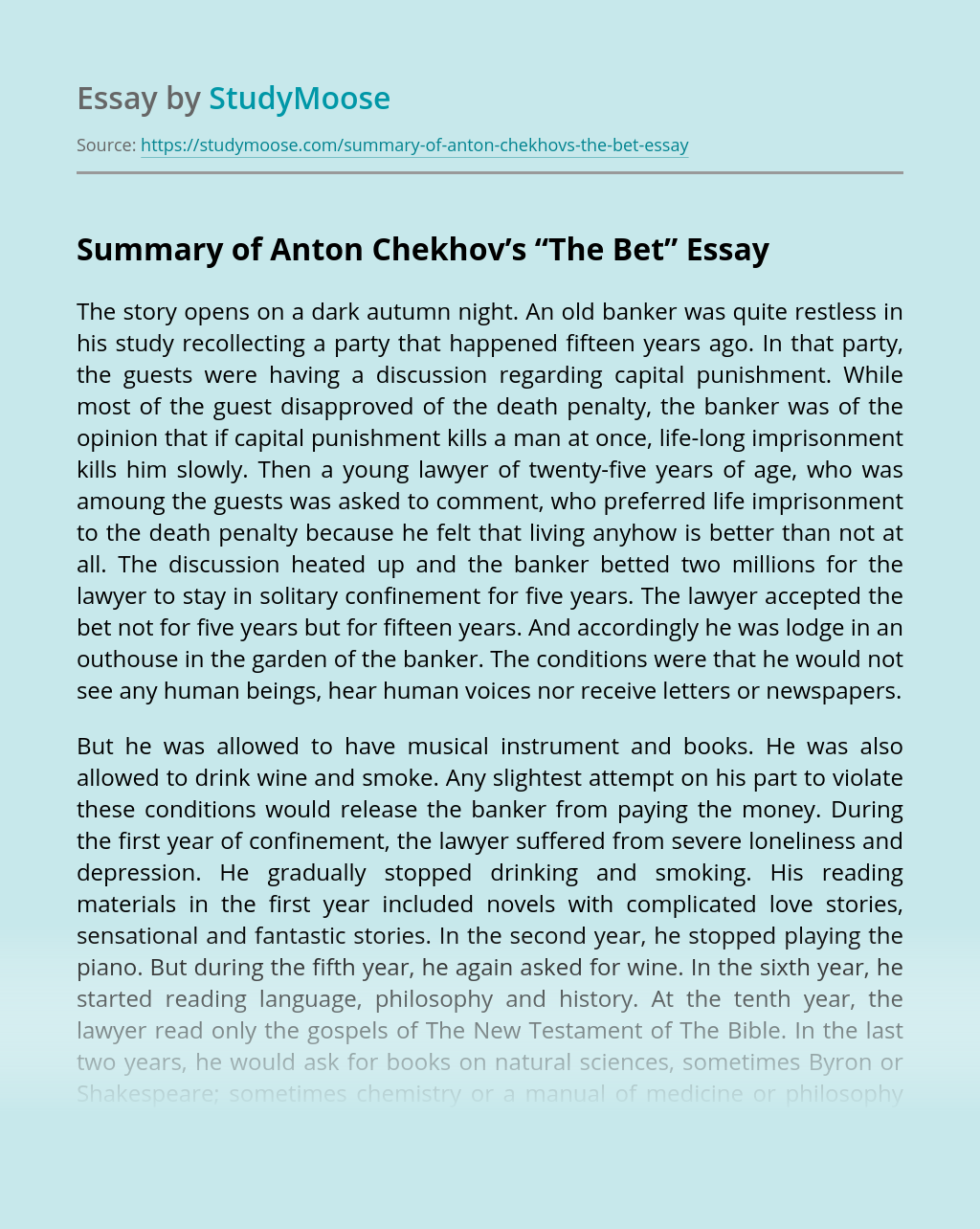 How far do the sources agree that the philosophy of separate spheres implied that women were inferior to men?

Source one is implying that men and women are different and it’s due to God’s decision. He made the decision to have them in separate spheres. What makes the difference bigger and more significant was that women weren’t educated unlike males and their manners were vastly different. From the source it says, “They are designed...

To do this, lawmakers needed to understand what had happened, particularly because housing had until then seemed like such a bright spot in the US economy. The US housing “bubble” in the early 21st century In his 2001 letter to shareholders, Fannie Mae CEO Franklin Raines wrote, “Housing is a safe, leveraged investment – the...

In the two capital budgeting cases corporations (A and B) have different revenues values and expenses as well as variable depreciation expenses, tax rates and discount rates. The members of our team had to compute both corporate cases NVP, IRR, PI, Payback Period, DPP, and project a 5-year income statement and cash flow in a...

Why the legal age to get a tattoo should be lowered

Would you prefer your child/grandchild have a safe tattoo or a potentially life threatening disease? A tattoo may be a scary thing for the parent of a teenager, but in the heart of a parent who loves their child the possible dangers of a tattoo achieved through the ambition of a teenager should far outweigh...

GastronomyA is the survey ofA foodA andA civilization, with a peculiar focal point on gourmet culinary art. ModernA gastronomyA has its roots in several Gallic texts published in the 1800s, but the thought of relatingA nutrient, scientific discipline, society, and the humanistic disciplines has been about much longer. TrueA gastronomy is a demanding multidisciplinary art...