Summary of A Village Cricket Match by Macdonald

A G Macdonald’s ‘A Village Cricket match” is an excerpt from his satirical work – ‘England, their England’ set against a backdrop of an English village. The story is an amusing portrayal of a village cricket match witnessed by Donald Emerson, a young Scotsman living in England.

The story begins with a description of the village in which a cricket match was to take place. Around the field, groups of village rustics were patiently awaiting the start of the game.

Don't use plagiarized sources. Get your custom essay on
“ Summary of A Village Cricket Match by Macdonald ”
Get custom paper
NEW! smart matching with writer

The author says that the village folk were seldom impatient as their lives were so occupied in ‘combating the eccentricities of God’ .that the eccentricities of man were not of great importance. ‘Blue –and –green dragonflies, swans, a magpie and doves gave an articulate description of the village landscape. ‘The world stood still’ awaiting the start of the match. At twenty minutes to three, Mr. Hodge , the captain of the visiting team from London, was making negotiations with the captain of the home team of Fordenden as two of his players were absent.

Proficient in: An Interesting Cricket Match

Just as the decision was made to play with eleven men on each side, with fielders common, the two defaulters arrived with an extra man. Further discussions led to the start of the match with twelve men on each side. This episode is a satire at the manipulation of the rules.

Mr Hodge sent his opening pair to bat while James Livingstone was sound player, the other player Boone was an ‘awe-inspiring colossus of a man.

’ Donald Cameron felt that sending such cracks (expert player) against the humble rustics was unfair but reminded himself that he was not an authority on cricket, being a foreigner. The Fordenden captain arranged his players among the daisies, buttercups, dandelions and sorrel, which grew in abundance on the uneven terrain. The terrain behind the bowler’s wicket sloped away abruptly as a result of which the batsman saw the bowler blacksmith only during the last few of the latter’s ‘galvanic’ yards.

The writer describes the blacksmith as a ‘mettlesome combination of Vulcan and Venus Anadyomene’ as his strength equaled the combined power of the Roman God of fire and his wife. However when Livingstone hit a four, the rustics and Hodge’s team were shocked alike. The row of gaffers called for more drinks as it had been a longtime since they had seen Jour byes. In comparison to the appalling velocity of the first ball, the second hit the wicket keeper and a substitute was called for. The third ball went for a six but the fourth hit the stumps. The score remained ten runs for one wicket. In this section the writer creates a grand picture by drawing epic comparisons with the Roman Gods. The flora and the fauna of the village create a mind image of the countryside offering a contrast to the polluted cities.

While the next batsman, a professor retired hurt, Mr. Harcourt, the one after him had the ‘singular misfortune’ of hitting the wickets himself and getting out. The score remained ten runs for two wickets with one injured and retired batsman. The next bowler was the local-rate collector, a man whose life was one of ‘infinite patience and guile’. He dismissed the portentous Boone, who as the writer found out later, was into rowing and not cricket. The next batsman was the famous novelist Robert Southcott, a “small and quite man, dressed in white flannels, white socks, a pale pink shirt and white cap” . Southcott did not seem like a sportsman at all. When Mr. Hodge advised him to hold his wicket as runs were not important, Donald noted that it was team spirit at work’. He hit the rate collector’s first ball for a six into the hay field. He hit the second into the saloon bar for a six. The rate collector’s third ‘slow and crafty’ ball which was endowed with ‘every iota of finger spin and brain power that he had’ also went high and into the squire’s trout stream.

The rate collector was baffled at the wild “unscientific bashing” and feared that his reputation with the villagers was at stake as a result of which his installments would be difficult to collect. His three famous deliveries ‘the leg–break, the fast yorker and the slow’ had proved futile. When his over was up he was relieved by the Forester, a moderate bowler.

The blacksmith who was angered at the insulting treatment meted out to his deliveries, took the last ball of the over as a ‘do or die’ situation. While some urchins supported the blacksmith, some worshipped Southcott as a deity. Then Mr. Harcourt, a previously dismissed batsman, was sent for umpiring. The ‘world held its breath’ as the blacksmith came charging. According to the writer it was the ‘charge of von Bredow’s Dragoons at Gravelotte’ over again. Here, reference is made to the event of August 16, 1870 during the Franco-Prussian war. When the Prussians were vastly outnumbered by the French, major General Friedrich von Bredow led the Prussian cavalry against the French artillery and won the Battle of Mars-La Tour. His charge is used to describe a brave attempt against overwhelming odds. In this section the author draws a contrast of many characters while Southcott is unperturbed and impassive and bears no ill-will towards the other team, the blacksmith is an extremely passionate and aggressive player. The rate collector’s priorities are crystal clear when he shows he is more worried about his livelihood than the game itself.

Being a person with a very ‘pleasant sense of humour’, Mr. Harcourt was tipsy while umpiring. He decided to play a prank on the blacksmith. Just when the ‘giant whirlwind of volcanic energy rushed past him, Mr. Harcourt who was ‘quivering with excitement and internal laughter‘ shouted “No ball”. The ball slipped out of the bowler’s hand and hit the person in the third slip. While he fell flat and screamed, the blacksmith himself was thrown off balance and fell in the centre of the wicket, twisted this ankle while the urchin howled like ’intoxicated banshees’ , Mr. Harcourt laughed internally so much that he got hiccups . At that moment, Mr. Hodge, asked Mr. Southcott to play his new game.

He turned defensive and hit only one run in the next quarter of an hour and was then declared leg before wicket, the score remaining 69 for 6. Mr. Harcourt’s demonstrable lack of respect was more out of his desire to be funny than any serious rivalry. The writer has skillfully taken the moment to a climax and then ruptured it. Finally Mr. Shakespeare Pollock came forward to bat. He was an American journalist who was new to the game. He struck the first ball towards square leg after which he threw his bat down and ran towards the cover point. After a paralyzed silence on the field

Summary of A Village Cricket Match by Macdonald. (2016, Mar 23). Retrieved from https://studymoose.com/summary-of-a-village-cricket-match-by-macdonald-essay 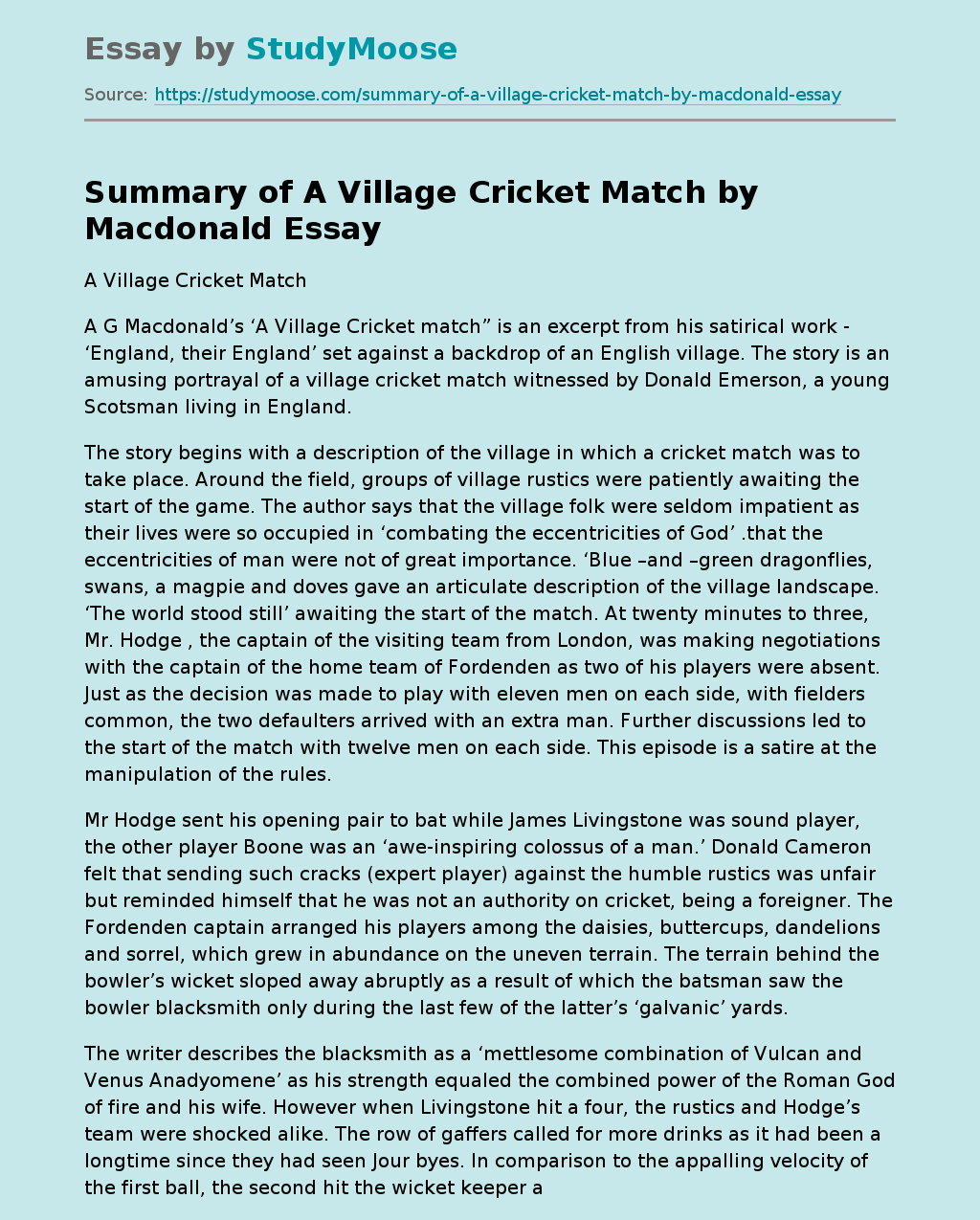