Haiti’s Earthquake and the Humanitarian Impulse from p.264 to p.268 in “Become an Active Reader” by Andrew D. Pinto, On 12 January 2010, at 16:53 local time, Haiti experienced a catastrophic magnitude-7.0 earthquake 25 kilometres west of the capital, Port-au-Prince. More than 220,000 people died and 2.3 million were displaced, while the magnitude-8.0 earthquake that struck Chile on 27 February 2010 resulted in fewer than 800 deaths, despite its higher magnitude. Why was Haiti’s experience so different? Most commentators have pointed to physical factors.

Don't use plagiarized sources.
Get Your Custom Essay on Summary for Denaturalizing Natural Disasters Just from $13,9/Page

However, although many have noted Haiti’s poverty and internal strife, only a few commentators have identified these as key determinants of the level of devastation caused by the earthquake. Even fewer have suggested looking at the historical record or where Haiti stands in the current world order for an explanation. What is considered “natural”, in the context of disasters such as Haiti’s, is seen as independent of human actions. Any analysis of such events must “denaturalize” them by examining the historic, political and economic contexts within which they occur.

Without this, the humanitarian impulse informing international efforts to support Haiti’s recovery and development may serve to merely reinforce the historic relationship between wealthy countries and Haiti and may fuel continued underdevelopment.

Knowledge of Haiti’s history is integral to an informed understanding of the earthquake and its outcome. Soon after Spanish colonized the island, native people vanished because of imported disease, malnutrition and maltreatment. Plantation of sugar cane became fields of misery for tens of thousands of trafficked African slaves, while Spain and France reaped the profits. The French Revolution triggered Haiti’s independence in 1804, which was the first example of slaves winning nationhood by their own resistance. However, with its economy ruined by revolutionary war, Haiti was forced to agree to unfair trading relationships with nations that refused to recognize its sovereignty. Throughout the 19th century, France, USA, German and Britain invade Haiti to deprive its national coffer. Foreign interference and political destabilization have continually undermined governance in Haiti. For example, USA enabled Haiti to pass the constitution that allows foreign ownership of land, and helped to emerge dictators such as “PaPa Doc” Duvalier and his son “Baby Doc” one after another.

Western countries supported them during “Cold War” ostensibly to fight against communism but also to support the interest of foreign companies who benefited from low-cost Haitian labour. Jean-Bertrand Aristide who was supported by the poor and working class was elected as the president in 1990 and 2000, but he was removed in a coup twice, because his popular reforms threatened the status quo of Haiti’s oligarchies and foreign interests. External forces played a role in both coups, leaving Haiti’s political health tenuous ever since. With this historical background in mind, one can examine the response of the global community to the 2010 earthquake. The immediate response by the international community succeeded in many ways. As a result of humanitarian impulse, no major epidemics have yet occurred in any of the camp but cholera. However, some aspects of the post-earthquake response have been problematic. Focus on the immediate humanitarian response appears to have prevented a consideration of how the ground work for future development could be laid. At the time of publishing, the vast majority of those displaced are still living in tents or other temporary structures and over 95% of the rubble has yet to be cleared.

The provision of the essential social services by the Haitian government is unlikely in the near future. The humanitarian impulse is too often fitful and fragmented. Furthermore, the involvement of high-income countries in the root causes of the devastation caused by “natural” disasters in low-income countries is rarely examined. So actual histories should replace the more palatable fictional histories that attempt to explain away wealthy nations’ past contributions to the persistent poverty in the world. Acknowledging actual histories may have little impact on the technical details of the initial emergency response, but it may make a difference in how relief efforts are subsequently carried out, particularly in the long-run.

Appeals for funds can be combined with educational initiatives to explain to policymakers and the public why an event has occurred and how it relates to social, economic and political forces. Acknowledging the actual histories that have led to Haiti’s underdevelopment would require wealthy nations to probe their own political, social and economic involvement in Haiti’s underdevelopment. Although a laudable humanitarian impulse has driven relief efforts in Haiti, it alone is insufficient for the task of rebuilding the nation. In numerous countries where humanitarians operates including Haiti, respecting history and seeing the connection between historic actions and present conditions is essential.

Summary for Denaturalizing Natural Disasters. (2016, May 07). Retrieved from https://studymoose.com/summary-for-denaturalizing-natural-disasters-essay 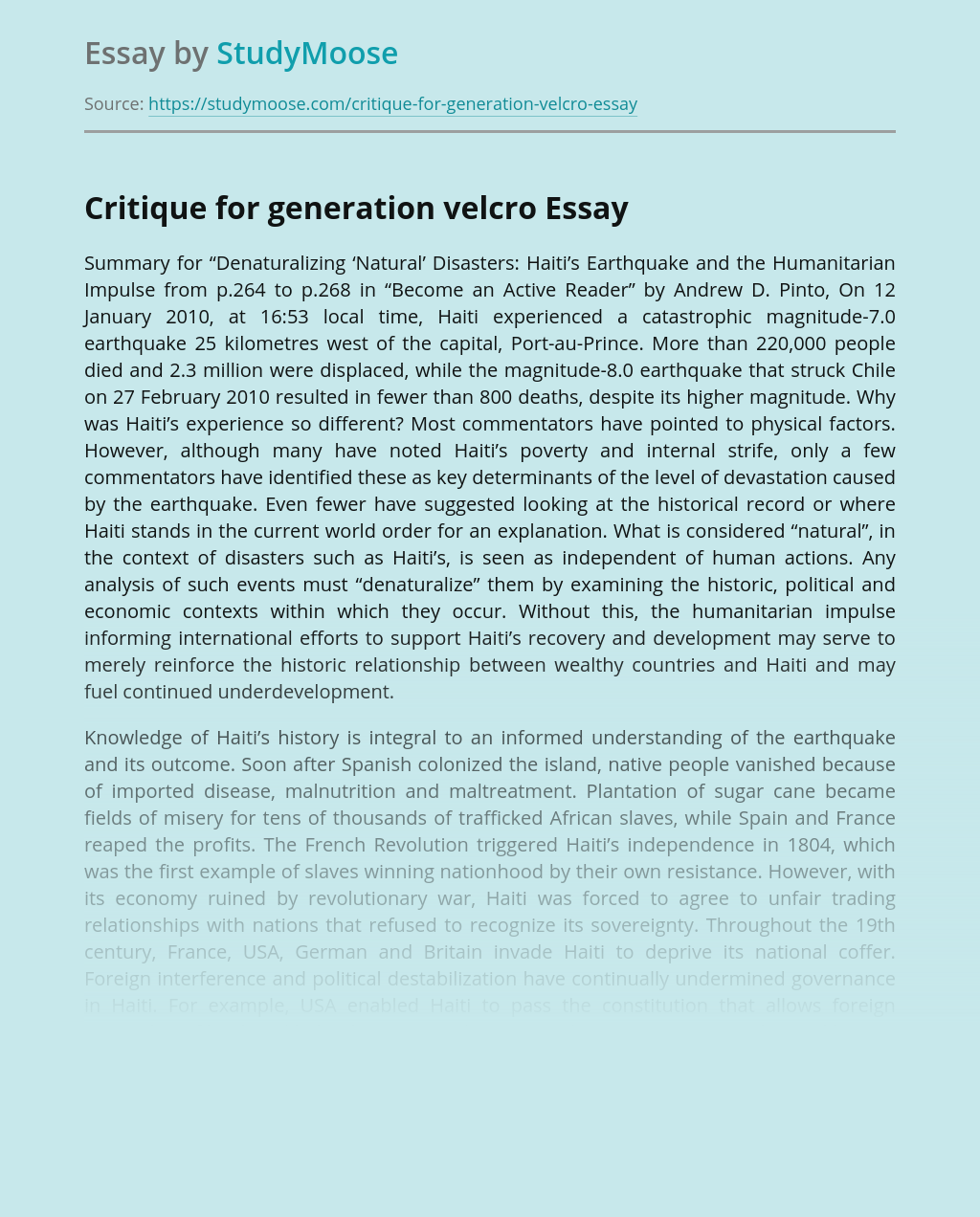 Rate this post In the poem War Photograph, Kate Daniels immediately expects us to know which photograph she is talking about as soon as she gets past the first verse (which describes the photo in question) which explains why it is so short. The first stanza is describing what we see, immediately in front of...

The role of glycoproteins in the causes

Rate this post The role of glycoproteins in the causes, diagnosis and treatment of Gaucher’s diseaseIntroduction Gaucher’s disease is a rare autosomal genetic disorder which is believed to be caused by the insufficient production of the lysosomal hydrolase enzyme, glycocerbrosidase. This decrease of this lysosomal enzyme therefore decreases the action of the enzyme to act...

Frankfurt on Personhood and Moral Responsibility

Country analysis of The Democratic Republic of Congo

Rate this post This location allows grief from neighboring countries on the other hand it is in an ideal location by way of trade routes to other countries and access to the Atlantic Ocean and the Congo River. The Democratic Republic of Congo is also dense with valuable minerals making it regarded as one of...