History of the case:

Bob and Sallie Sumerel, Steven and Ann Berzin, Dane and Kerry Dicke, and Bart Kaufman are suing Good Year due to a the defective manufactured hose that was installed in the plaintiffs’ heating systems in all their cars. Good Year feels they are not responsible for the “other cost and losses” the plaintiffs are claiming. The District Court decided in favor of the plaintiffs. Good year appeal the case and it was later over turned due to there not being a proper agreement on the amount to be paid.

The amount ordered was incorrect so both sides negotiate the correct pricing. Due to procedure taken to come to a decision the court over turned the decision on the grounds of the agreement not being properly executed by the Lawyers of both sides.

The plaintiff’s theory (Why he thinks he is right)

The Plaintiffs feel they are entitled to the original amount the court ordered the Good Year to pay them. In their minds they felt like if the faulty hose were not put into their vehicles then this would not be an issue for the courts. Since the hose was put in the vehicles Good Year was liable for any issue caused by this hose. They want to be compensated for all “other cost and losses” they encountered because of this.

Good Year doesn’t feel they are responsible for the “other cost and losses” suffered by the Plaintiffs in this case. Good Year feel like if they pay the correct amount they will have satisfied the courts decision. Once the attorneys calculated the correct amount and tried to fix the issue Good Year felt they were only obligated to pay that amount only.

Should the Plaintiffs really get the $1.3 million ordered by the Courts? Should they be awarded any money for their “other cost and losses”?

The holding of the court

It was found that no, Good Year Tire & Rubber Company was not responsible for the “other cost and losses” of the Plaintiffs. Good Year was not obligated to pay the Plaintiffs since there was no agreement made for payment. The error that was found was bought to Good Year’s attention but the attorneys failed to agree on the correct amount.

What do you think?

I think that Good Year Tires should pay the Plaintiffs’ the correct amount from the parentages the courts ordered them to pay. The Plaintiffs’ attorneys should have ensured they make an agreement on their behalf once the discrepancy was found. The emails and charts was a start but the best thing Brooks could have done was to follow up with Good Year’s attorneys. The fact that they didn’t follow up with them cost the Plaintiffs large amounts of money. 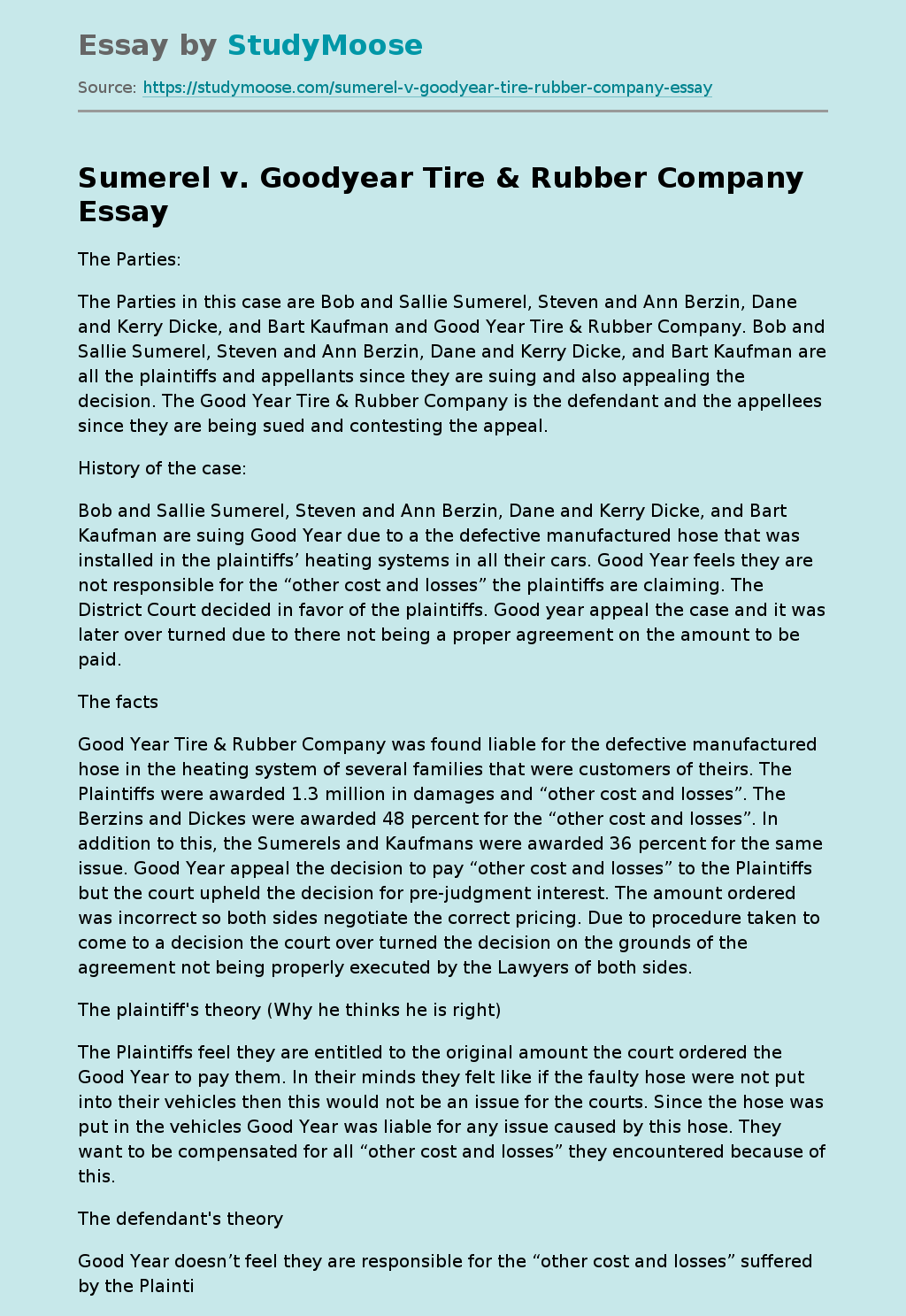