Suicide takes the lives of nearly 30,000 Americans every year. People commit suicide every day in the world. It is an ugly but truthful thing in the world. Some people’s situations put them in a more likely position to commit suicide. Some of the main contributors to suicide are troubles with in a family, friends, careers, and social life. It’s important that people are aware of warning signs. They also should know common characteristics of those who are suicidal and those who succeed in taking their own lives.

Don't use plagiarized sources. Get your custom essay on
“ Suicide Prevention ”
Get custom paper
NEW! smart matching with writer

You can save them and prevent another victim to suicide. A big reason people commit suicide is because of family problems. A person’s family has a huge impact on an individual’s life. Children that experience family problems such as their parents getting divorced are more likely to commit suicide. Children that get abused or neglected are also a lot more likely to take their own life.

Most children that are put into these situations feel that they have nowhere to go for help. Most try to communicate their feelings to friend, but they don’t get the necessary help or advice they are looking for.

Relationships can also be a reason that people commit suicide. Some people when they break up with someone who they love or loved for a very long time don’t know how to deal with being by themselves.

They feel that all the sadness and pain the other person has caused upon them, they can give it back to the person by killing themselves and making the other person feel guilty.David A. Gershaw, Ph.D. notes that “College students are twice as likely to kill themselves as are non-students of the same age.” Struggling in school is a big reason that people commit suicide.

Some students have so much pressure on them to do well in school that it’s hard for them to deal with that pressure and school at the same time. If students have a lot of pressure on themselves to do well and then end up failing to do so, it could make them feel that it would be easier to end their lives rather than dealing with it. The more pressures added could come from all kinds of different places ranging from their family to their own friends.

College students are a big risk to commit suicide for this particular reason. Their pressure to succeed is greatly increased because now days, college is a very big in deciding the rest of their lives. All of the money they are spending or their parents are spending on their college education means that they have a lot more riding on their success. Most college students are burdened with independence and responsibility for the very first time and with a little pressure it can become overwhelmed.Failure in someone’s career is another factor why people commit to suicide. It could be because they lose their job or they just don’t feel successful or important in their current career.

Many people who lose their jobs don’t know what to do. Many have no idea what is going to happen to them and they are not prepared for it. They may not be able to pay their bills or even take care of themselves or even family. A lot of people never even think of what they would do if they lost their job. People who lose their job may feel that they are lost and don’t think that they have any options in their life.so, they feel that suicide is their only option and is the easiest solution to their problems. Although one’s personal life is a big contribution to most suicides. Illness and disease are another major cause for suicide. Many people commit suicide to free their pain caused by a long term illness.

Long term illness is something most people can’t and don’t want to ever deal with. This is enough is a reason for people to commit suicide. Many people feel that an individual should have the right to free themselves of the pain they may have from a long term illness. People also commit suicide because they contract other diseases, even though they may not be suffering yet. Most people don’t want to go through life knowing that they’re going to die from a certain disease. A perfect example of a disease is AIDS. AIDS is something that most people don’t want to live with. Some people would just rather be dead than have to deal with living with certain diseases.

Suicide is one of the most serious symptoms of someone who is suffering from severe depression. If you have a friend who is suffering from depression or seems sad a lot, just ask him or her if she is okay. Doing so might let them open up to you. If unsure if that friend is depressed there are warning signs to look for. They might mention things like: “You’d be better off without me” or “Next time I’ll take enough pills to do the job right.” Sometimes somebody who is trying to cope with depression on their own will be seen turning to things like alcohol or drugs to help with the depression and helpless feeling. Others might eat more, watch television for hours on end in bed, and not want to leave their house, apartment.

A person who is depressed may stop caring about their physical appearance on a regular basis, or whether they shower or brush their teeth. According to the U.S. Department of Health and Human Services, at least 90 percent of all people who commit suicide suffer from one or more mental disorders such as depression, bipolar disorder, schizophrenia, or alcoholism.There are many ways a suicidal person gives away they he or she might commit or have thoughts to commit suicide. In deciding what to do, first find out what’s wrong. Pay attention for the warning signs of suicide. Certain jokes, comments, and actions can indicate that your friend doesn’t plan to be alive in the near future.

Realizing that a friend needs help is the first step to saving their life. If you see certain signs, it’s important to find out what they really mean. If you’re worried about them, it’s best to go talk with your friend. Ask how things going with them. In particular, asking about their future plans. When talking with them try and notice if your friend looks away when you ask about them and their day or future plans.Over the past five years I have served in the United States Navy. In those years I’ve had receive much training over suicidal prevention. I have heard of many sailors and other military personal committing suicide because they are unable to live up to the standards of the military.

When a person is in a suicidal state, they are not acting in their own best interest; they are turned against themselves. They are operating in trance-like condition, in which they are listening to all the negative things inside them. We all should be able to tell if someone is need of help. When someone is in this trans-like condition they appear different from everyone else. It’s our job to reach out to those people and give them a hand. Make them feel like they are important to life and you care about them.

By taking time and showing that we care and that they’re not alone, we can help people to feel connected. Two conditions that can lead to suicide involve a person feeling that they are a burden and that they are disconnected and alone. We can help someone immensely just by letting them know that they matter to us and that they are not on their own God has been part of my life through the years.

One thing I have learned from reading the bible is that God wants us to spread the word of his existence and what he sent his Son to do for us. I believe by getting the information to those who are suicidal, can save their life. God works in mysterious ways, we all have our own experience, and if we share them with those who need to be lifted, we can save lives. Suicide is never a solution. There is no problem so great that it cannot be resolved with time and care. This list is meant not as an instruction guide, but a description of the most common forms of suicide.

The following is a list of sites you can visit to get help if you are feeling beyond help. Please remember, no matter how bad things get, someone, somewhere is able to listen to you and help you through.The last thing that most people expect is that they will run out of reasons to live. But if you are experiencing suicidal thoughts, you need to know that you’re not alone. By some estimates, as many as one in six people will become seriously suicidal at some point in their lives.

Fortunately, most people do not act on their suicidal thoughts, but with time, crises pass and problems are solved. But, sometimes thoughts lead to self-harm. If you are unable to think of solutions other than suicide, it is not that solutions don’t exist, only that you are currently unable to see them.

Therapists and counselors (and sometimes friends) can help you to see solutions that otherwise are not apparent to you. Problems are rarely as great as they appear at first. Job loss, financial problems, loss of important people in our lives. All stressful events can seem devastating at the time they are happening. Then, month or even years later, they usually look smaller and manageable then they were before. Sometimes, imagining ourselves “five years down the road” can help us to see that a problem that currently seems overwhelming will pass and that we will survive. So, if you have suicidal thoughts, reach out to someone. Also, if you know someone who is suicidal reach out to them before it’s too late.

Suicide Prevention. (2016, May 11). Retrieved from https://studymoose.com/suicide-prevention-essay 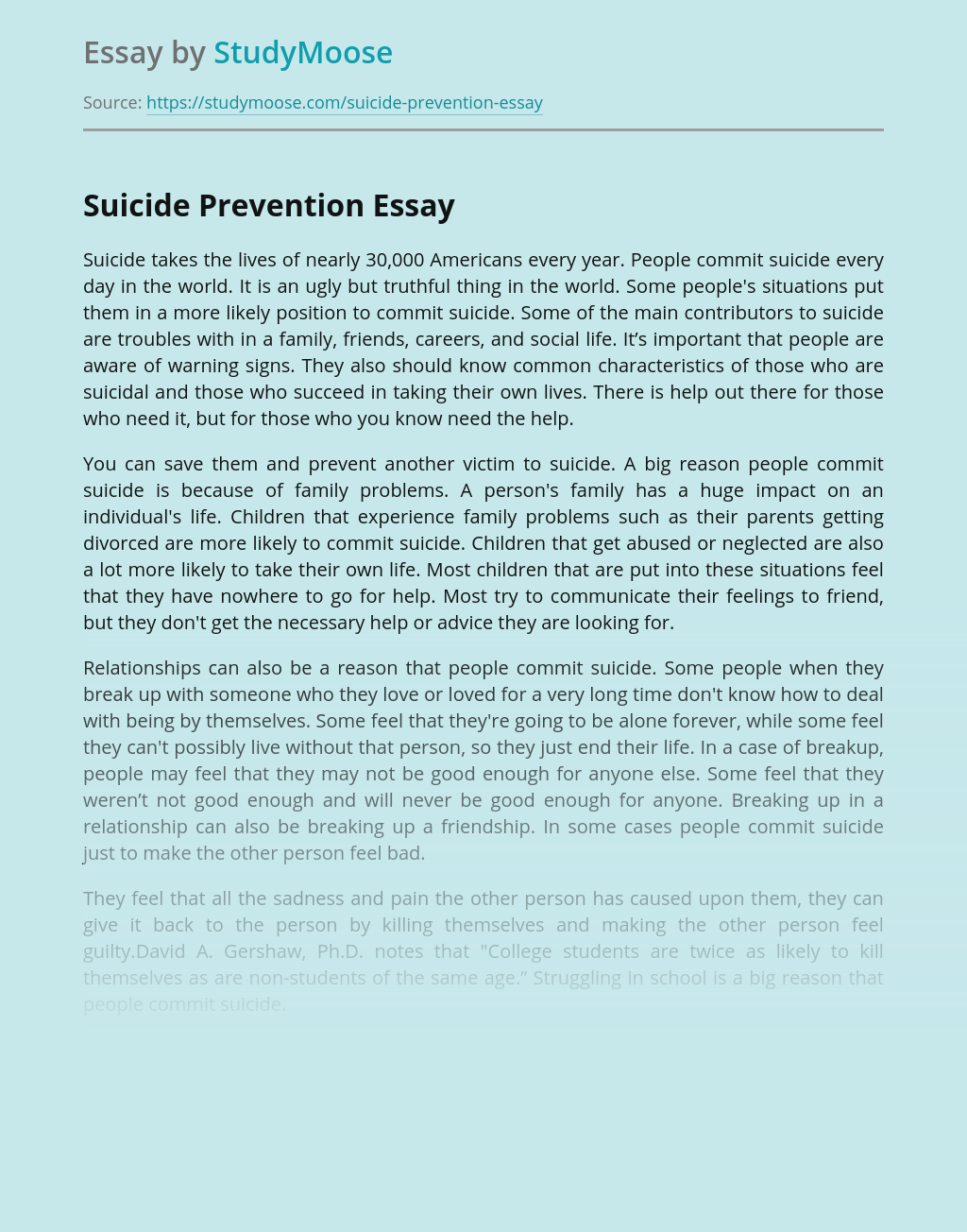