Today, I stand here as I give my speech concerning suicidal. Since the beginning of time, people have been committing suicide. Suicide is a self-inflicted death. Easier to understand, suicide is choosing the mode, time or occasion for ending one’s life. Did you know that suicidal is the third leading cause of death in the world? Not only that, but based on research, suicide attempts increases tremendously during teenage years. As a matter of fact, teenage years are really the most complicated part of one’s life.

Don't use plagiarized sources.
Get Your Custom Essay on Suicidal Speech Just from $13,9/Page

Most especially nowadays, there’s always that pressure in a teenager. There’s pressure to fit in socially, to perform academically, and to act responsibly.

Teenage years or commonly adolescence is also a time of sexual identity and relationships and a need for independence that often conflicts with the rules and expectations set by others. Young people with mental health problems — such as anxiety, depression, bipolar disorder, or insomnia — are at higher risk for suicidal thoughts.

In some cases, people attempt suicide do not really want to die, instead, they want to escape their problems, but they can’t see a way out or imagine things getting better. Often, a suicide attempt is a “cry for help” from a person who doesn’t know where to turn.

A person who attempts to suicide should be treated immediately. There are many ways to get off from suicidal but it is not easy. Psychotherapist, antidepressant medication – if necessary, hospitalization and family are of best help.

Suicide is never good. Biblically, God stated that we should not kill. That is why, if we know suicidal people we should help them save their life. 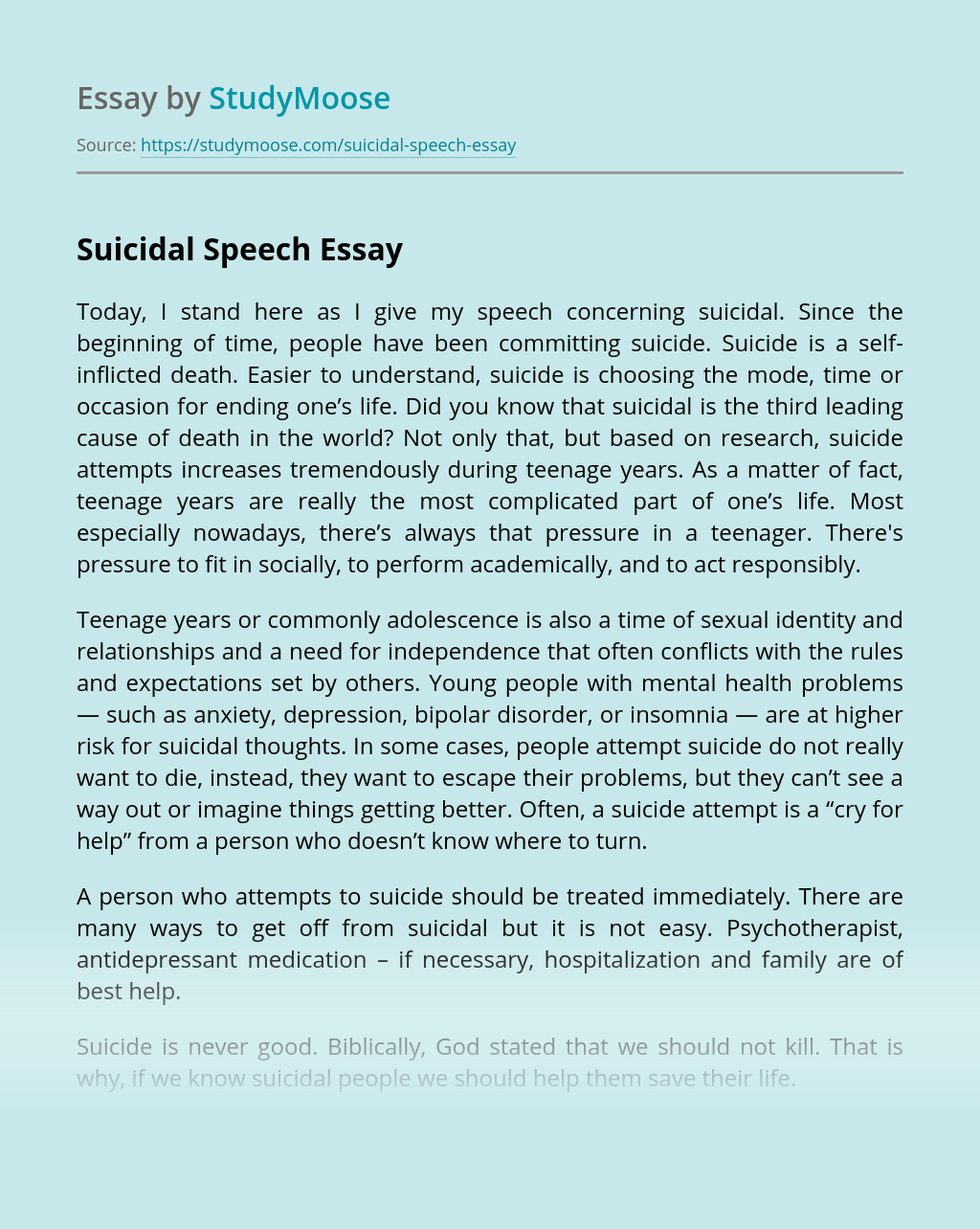 How is love portrayed in Romeo and Juliet?

Understanding The Stages Of Grief

All of us have experienced grief one way or another. We grieve when we lose someone dear to us, be it a family member, a close friend, or a pet, when a romantic relationship ends, or when we acquire a terminal illness. The resulting emotional pain is tantamount to a physical pain. It is indeed...

Short Response on "The Story of an Hour" by Kate Chopin

Only a belief in embodied existence after death is philosophically justifiable. Discuss

1- Christian belief in resurrection- outline Jesus’ resurrection after death- Link to hicks idea of the replica. 3- The only meaningful way to talk about survival after death is to say that souls can be reunited- Peter Geach 5- Characteristics and memories can be changed and falsified- Bernard William Descartes said ‘ My essence consists...