Suffering in "Job" and "The Aeneid"

This paper compares the suffering in Virgil’s “Aeneid ” and “Job” from the Old Testament and concludes that Job’s suffering was the most severe.

The Meaning of Suffering in “Job” and “The Aeneid” Throughout Virgil1s Aeneid and Job from the Old Testament, great obstacles block the paths of the protagonists. Mental and physical, anguish is placed upon Job and Aeneas. Though both men suffer extreme pain, the extent and content of the tribulations are different. Job1s suffering is placed upon him without provocation.

Don't use plagiarized sources. Get your custom essay on
“ Suffering in “Job” and “The Aeneid” ”
Get custom paper
NEW! smart matching with writer

Aeneas also believes his 3pain [is] so great and unmerited!2 (Virgil 2.89). Juno1s hatred towards the Trojans, however, is fueled by many things such as the descent of the Trojans from Jupiter1s illegitimate son and the fact that the Trojan people are fated to destroy Carthage, her favorite city. God takes away everyone dear to Job. He is physically alone except for Eliphaz, Bilad, Zophar and Elihu. These men, although they are the only people to speak to Job, offer very little sympathy.

They blame him for his misfortune and tell Job that he has probably angered God to an extent that his punishment is deserved. Aeneas, though, has the companionship of his men and other friends which help him along his journey. Not only are his men friendly and admiring of Aeneas, they are on his side. They help him on his journey. They are all fighting for the same cause. This fact alone makes Job1s misfortune more taxing. Their mental anguish is not limited to matters of this world.

Each man is faced with dilemmas concerning their spiritual beliefs. Though he begs and calls to God for an explanation, Job receives nothing. This causes alone causes more mental anguish than anything else that happens in either work. Job1s family is exterminated, he is pile of fermenting flesh, and he has no sign from God as to why this is happening. Job does not even get omens or other supernatural signals to assure him of God existence. Aeneas, though, receives security not only of the existence of higher powers, but that they are actually aiding him. These incidents such as the omen of the flame on his son1s head, Jupiter sending Mercury to remind Aeneas to stay on task, and Venus predicting the safety of his ships to him allow Aeneas to be comforted that there are gods looking out for him. Satan1s relentlessness combined with God1s confidence in Job take Job to a degree of suffering that Aeneas could only imagine. Though both men suffer physically, the way in which they suffer is extremely different. Job absorbs a greater amount of pain without leaving his home. Socially, Aeneas is an outcast. His teeth are rotting. He has boils, lesions and scabs covering his skin. His senses of sight and hearing are severely impaired. His putrid breath and horrendous appearance virtually exclude him from functioning with other people. Aeneas, however, finds his pain on a physical journey which takes him to many different lands. He has the physical burdens of travel, which in his time is quite a bit more than jet lag, but his physical and social battles are quite the opposite of Job. He is made even more attractive by the gods. He even has a queen fall in love with him, and were it not for Jupiter and Mercury1s intervention, he would have conceivably fallen in love and stayed with Dido. Though lesions and scabs cover his body, his senses are impaired, and his teeth are rotting, Job1s biggest burden is not of the flesh. It is of the spirit, mind, and soul. Aeneas believes the gods are evil, 3If the gods1 will had not been sinister. . . 3 (Virgil 2.74). Job, however, questions God1s nature, but always has faith that God is loving. His biggest concern is not what has happened to him, but why. Except for Eliphaz, Bilad, Zophar and Elihu, he is physically alone. He begins to wonder if he is spiritually alone as well. The three comforters try to rationalize Job1s suffering after they become mute at his horrid appearance. Aeneas always knows the gods are with him. He knows what his destiny is and what he must do to fulfill it. Even if Aeneas1s destiny would have been for him to die a terrible death in battle, it would have been easier on his mind than to have no knowledge of his future as was the case for Job. Each man during his suffering wishes for death. Job calls out, 3may it turn to darkness2 (3:4). Aeneas, while on the ship, wishes he would have died in battle rather than face his future. Job and Aeneas feel that their suffering is so great that death would be a better alternative. While Job1s pain may seem greater, death is death, and both men were prepared to accept it with open arms to avoid any more strife. The degree which each man suffers is rewarded accordingly at the end. Job is rewarded with his family and friends. He gains an abundance of wealth and social stature, as well as God1s gift of longevity. He doubles the size of his family when you consider that he fathers ten new children and still has the ten others waiting in heaven for him. When he arrives there, he will see the true gifts of God. Aeneas, on the other hand, simply fulfills fate. He builds a city with the help of the gods. Though building a city is a great feat, Aeneas is hardly alone in his struggle. He has thousands of mortals working with him, not to mention the fact that he has the gods working to protect him too. The proportionate level of suffering weighs heavily on Job1s side. Aeneas has some tough times, but Job suffers almost beyond human capabilities. Aeneas had moments of excitement and adventure along his path, while Job had utter misery. Aeneas had far from a pain free voyage, but he was also worlds away from feeling the desperation and unheralded torture of Job.

Suffering in "Job" and "The Aeneid". (2020, Jun 02). Retrieved from https://studymoose.com/suffering-in-job-and-the-aeneid-new-essay 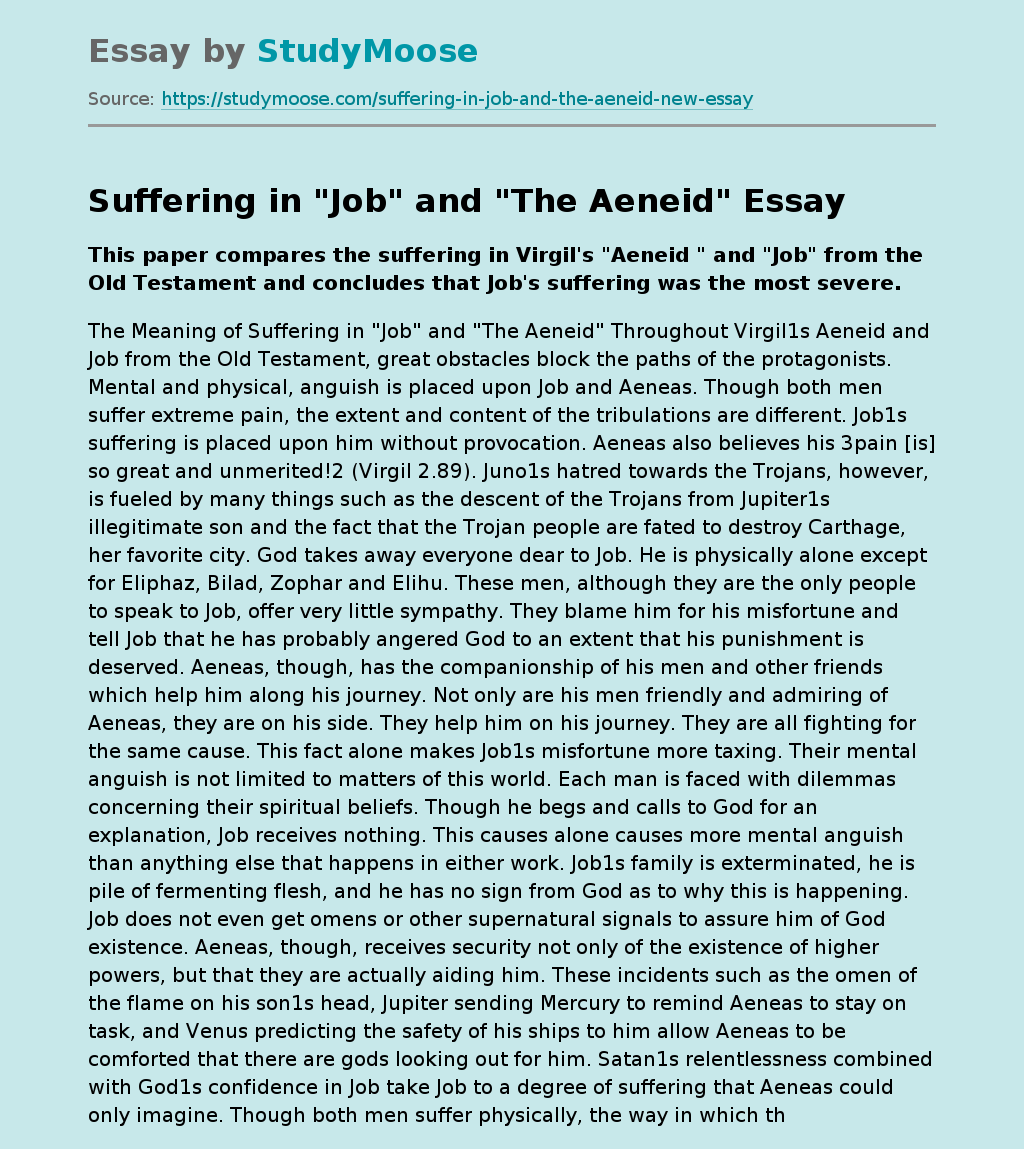