1. Introduction
The aviation industry is highly competitive and thus demands well planned and distinct strategies of airline companies (airlinetrends.com, 2013). Crucial for the success of such a company is hence its strategic management. Carriers need to be aware of their strategic position, make strategic choices and put their formulated strategy into action (Johnson, Whittington & Scholes, 2011). As this is a complex and challenging task, consultants like me help airlines with this task. We support companies with their overall operations and ensure greater profitability.

Our advice leads to successful and durable solutions. This report focuses on the success story of Air New Zealand, which has been awarded twice as “Airline of the year” by the ATW in 2010 and 2012. The question is: What are the success factors of Air New Zealand and how can the airline stay competitive? In order to answer this problem statement, we will have a closer look at the strategy of Air NZ and at its competitive advantage towards competitors such as Qantas, Pacific Blue or JetStar.

Afterwards, it will be pointed out, what Air NZ will and should do in order to stay successful and competitive in the future. 2. Methodology

This evaluative research seeks to assess the success of Air NZ’s strategy. The above mentioned research questions will be answered with a qualitative approach and secondary data. The issues will be analysed by applying appropriate tools and frameworks. The strategy of Air NZ will be evaluated by using the SAF criteria, while the competitive advantage of the airline company will be analysed by Porter’s three ‘generic’ strategies.

In order to indicate which future actions Air NZ should take, its current position in the business life cycle will be identified by using Greiner’s growth model and a SWOT analysis will be applied. Those steps will lead to a result based conclusion and following recommendations.
2.1Conceptual map

3. Case background
“Air New Zealand is an international and domestic airline group which provides air passenger and cargo transport services within New Zealand, as well as to and from Australia, the South West Pacific, Asia, North America and the United Kingdom” (Air New Zealand Ltd., 2013). The company was founded in 1940 as Tasman Empire Airways Limited (TEAL) and was renamed Air New Zealand Limited in 1965. Since 1999 it is full member of the Star Alliance group. Air NZ is based in Auckland and focuses on flights to Los Angeles and Sydney. In total, it has an operating fleet of 104 planes (June 2013), consisting of Jet Aircrafts and Turbo-props. Major shareholders of Air NZ are the New Zealand Government and other investors. Since March 2006 it has a new brand identity, which highlights its authenticity as a “Kiwi airline”. CEO Christopher Luxon stresses that Air NZ is an airline that focuses on the satisfaction of employees and customers, as well as on environmental issues (Air New Zealand Ltd., 2013).

The working method of Air NZ pays off with high revenues (NZ$ 4,486 million in 2012) and several awards each year. The airline is awarded for their innovations, such as the Spaceseat or the SkyCouch, for being the best employer and for offering the best (long-haul) flights. In 2013, Air NZ has been announced “Winner of the Global Tourism Business Award” by the WTTC (Air New Zealand Ltd., 2013). However, most remarkable is that Air NZ has become “Airline of the Year” twice in three years. The global aviation industry magazine ATW (Air Transport World) awarded the company in 2010 and 2012 for their leading position in the industry. The criteria which are set by the ATW for winning the award are the following (ATW, 2013): • Excellence, innovation and leadership by executive management • Strong financial discipline

• Consistent and excellent safety record
• Proven leadership in community, eco and technology endeavors • Consistent high standards of customer service
• Excellent labor relations
ATW’S Chief Editor Geoffrey Thomas stated that “the secret to its success is its constant reinvention, refinement of its product and a dedication to its staff. After developing Skycouch and the Spaceseat, many airlines would have taken time out. Not Air NZ, it’s on to the next project” (van den Bergh, 2012). New Zealand’s Prime Minister John Key proudly announced that “Air New Zealand is a vital part of our tourism infrastructure” (The New Zealand Herald, 2012). 4. Analysis

Before giving advice to Air NZ, it is necessary to understand their strategy and its resulting competitive advantage. We will also take a look at the planned future actions, before evaluating those. 4.1 The strategy of Air New Zealand

The strategy of the carrier is based on their vision and five guiding principles. The vision statement is: “By creating a workplace where everyone is committed to our customers in a distinctively New Zealand way, we will enjoy superior industry returns and be the number one airline in every market we serve” (Air New Zealand Ldt., 2013). The guiding principles are about customer satisfaction, competitive advantage and promotion. Besides, they see themselves as being a committed team and offering an inspiring workplace. Next to those principles, the airline also acts according to their values: “Be welcome as a friend, be yourself, can-do attitude, and share your New Zealand”. Those values sum up what makes this airline special. Air NZ focuses on their customers as well as on their employees.

They encourage people to be themselves, act natural and proactive and share the unique spirit of the country (Air New Zealand Ldt., 2013). Air NZ understood that engaged and content employees are crucial for satisfying customers. Another major strong point for the airline’s brand strategy is its constant innovative approach. Recent innovations of Air NZ are their new self-check-in, an economy Skycouch and a Premium Economy Spaceseat. Moreover, the airline benefits through delivering the kiwi brand experience, which is unique and sets them apart from competitors (Marque, 2012). The Koru, which is the new logo of the airline, symbolizes new life, growth, strength and peace and encourages employees to act with “humility, dignity and authenticity” (Air New Zealand Ldt., 2013).

The company clearly states what their strategy is and how they act accordingly. It is suitable, as it addresses key opportunities and constraints, such as using new technological developments for their innovations. Furthermore, it is acceptable, as it meets the expectations of stakeholders (e.g. government, investors, employees), has an acceptable level of risk and a high return. This can be proved with its awards and revenues, which also indicate that the strategy is feasible. It works in practice, it can be financed through profits and investors and the airline has qualified and highly motivated employees and the required resources. 4.2 Competitive advantage of Air New Zealand

The principle guidelines of Air NZ state amongst others that they “build competitive advantage in all [their] businesses through the creativity and innovation of [their] people” (Air New Zealand Ldt., 2013). Key advantages of the airline are its innovations, which are also beneficial for the economy class and the fact that they do not only sell a service, but also an experience to their customers. Those advantages create superior value for customers and resulting profits for the company. Air NZ achieves competitive advantage through differentiation, as it is constantly working on new innovations, such as the Skycouch, and on a more personal approach to their customers.

The competitive scope is a broad target, as they offer flights for economy and premium customers. From Porter’s three generic strategies, Air NZ makes use of the differentiation strategy, which makes them superior to competitors such as Qantas, JetStar or Pacific Blue. According to the industry life cycle matrix of Arthur D. Little, Air NZ is in a favorable competitive position, as it still needs to be aware of the highly competitive industry, but does have a leading position (Johnson, Scholes & Whittington, 2011). 4.3 Future Actions

The award winning airline Air NZ is clearly outstanding in the aviation industry; however, it is still in a stage of growth and in a need to outrival competitors such as Hawaiian Airlines or the new Qantas-Emirates (Johnson, Scholes & Whittington, 2011). The airline will focus on developing a Pacific Rim network with carriers in key markets such as Virgin Australia, Cathay and All Nippon Airways. Therefore, it needs to invest in aircrafts and new products. Another future plan is to get access to the Australian domestic market (CAPA Centre for Aviation, 2013). Besides, Air NZ states in their interim shareholder review of 2012 that they will keep on focusing on “the right markets with the right capacity, using the right aircraft with the right product and supported by the right partnerships” in order to stay successful (Air New Zealand Ltd., 2012). Another important aspect to consider is the external environment of Air NZ, which influences the industry. Opportunities and threats (see Appendix A – SWOT) are of major importance for the future of the airline. Opportunities are for example new partnerships, new markets or new technological developments, while threats are for instance the economic situation, rising fuel and labor costs and the strong competition in the aviation industry.

5. Conclusion
To conclude, one can say that Air NZ is one of the most successful airline companies in the world with strengths that lead to superior value and competitive advantage. The differentiation strategy of the carrier is suitable, acceptable and feasible and leads to their success factors which are its constant innovation, creativity, its care for employees, customers and the environment and the authentic “kiwi-experience” they sell. Furthermore, Air NZ acts in accordance with their values and guiding principles and achieved already a favourable competitive position in the market.

In order to stay competitive, it is of importance that the airline carries on acting in accordance with their strategy and reacts to the changing environment. External opportunities and threats should be considered for future plans, as well as internal strengths and weaknesses. Air New Zealand is already an award winning company, which already achieved its vision to become the number one airline, but it still has space to develop further and improve its products and services even more. 6. Recommendations

It is recommended that Air NZ keeps on developing their strategy and portfolio in order to stay competitive. It should invest in new markets, the fleet, their environmental plans and the recruiting and retaining of staff. Besides, brand awareness can be improved by new marketing campaigns and the use of social media and a regularly updated website. Another aspect which should be considered is that new innovations which directly affect customers should stay affordable for the broad target. Lastly, uncontrollable external factors need to be analysed and considered when developing and implementing the company’s corporate strategy. 7. Limitations

Due to the limited amount of 2000 words this report has, it was not possible to answer research questions in depth. More analysis tools and frameworks could have been applied if there had been no word limitation. In general, it was rather difficult to write a consultancy report with no experience as a consultant, especially concerning knowledge about the aviation industry. However, the short report gives a good overview of the main findings. Reference list 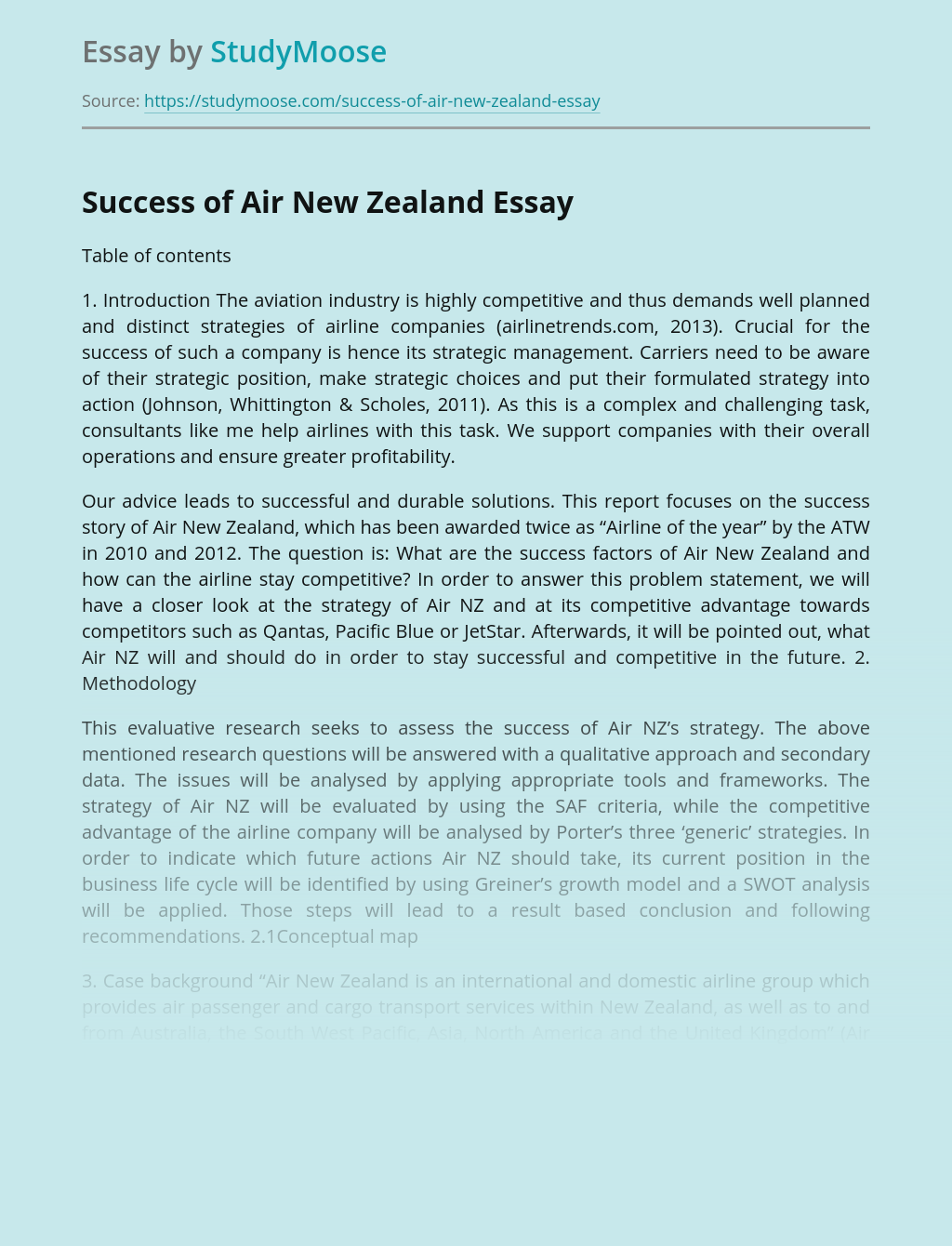