Studying Due to Serve or Fail

In Serve or Fail, by Dave Eggers, Eggers implies that college students have too much time on their hands that could instead be used for helping the community. He argues that college itself is time consuming and even with classes, studying, a job, and social activities there are still plenty of hours in the day that need killing. He also states that giving students the opportunity to serve the community in exchange for course credits hours will give students the motive to do so.

Don't use plagiarized sources. Get your custom essay on
“ Studying Due to Serve or Fail ”
Get custom paper
NEW! smart matching with writer

Not only would the community be benefited tremendously but the students as well. Lastly, Eggers confirms his argument by providing facts and statistics from previous cases that were very successful. Eggers proves his argument by providing these three things in his article. He states “About now, most recent college graduates, a mere week or two beyond their last final, are giving themselves a nice respite.” Eggers believes that the students do deserve “free time” but to a certain extent.

They shouldn’t just go to class and study 24 hours a day, 7 days a week, but they also shouldn’t play games and skip class either. Eggers begins his argument with personal experiences. Personal experiences is a great way to prove a thesis to an audience.

He shares “during my time there, I became one of the best two or three foosball players in the Land of Lincoln.” Soon, he realized that even after all the fun and games there was still extra time. Therefore, Eggers decided to volunteer.

He thought it would be exciting and maybe the start of a new hobby. He realized soon after that volunteering was not for him. It wasn’t that he didn’t enjoy it, he explains that he found a place he enjoyed volunteering at, but he didn’t have to volunteer, no one was forcing him to do this act of kindness; so, he quit. Because of Eggers providing us with personal experiences we can His second approach for his argument is offering the students credit hours in exchange for volunteer work. Doing so would give the students the motive to get up and make something of themselves by helping out in the community. He proposes the idea of trading twenty-five volunteer hours in exchange for one course credit hour, with a maximum of three credits per year. Also, to account for the college curriculum, experience and requirements, Eggers believes that the mandatory volunteer work shouldn’t come until the student’s junior and senior year. Of course, first and second year students could still do the “exchange program” but it wouldn’t be mandatory the first two years.

Eggers said, “A college history major might learn something by tutoring a local middle school class that’s studying the Underground Railroad”. Learning outside of a classroom is just as important and learning inside the classroom. Another approach from Eggers is provided by facts and statistics. Providing facts and statistics is a great way to prove a thesis to an audience. He provides us with evidence of successful cases from colleges, and some high schools, regarding his ideas. According to Eggers, “Some colleges, and many high schools, have such a thing in place, and last year Michael R. Veon, a Democratic member of Pennsylvania’s House of Representatives, introduced a bill that would require the more than 90,000 students at 14 state-run universities to perform 25 hours of community service annually.” Eggers points out that this plan sometimes won’t work for certain colleges and students, but even factoring those rare cases out, the statistics are still phenomenal; approximately 60 million hours overall! Eggers’ argument in his essay Serve or Fail provides us with personal experiences, motive for students, and facts and statistics that give us enough proof and evidence that we should test his theory throughout more colleges worldwide.

Eggers also provides an underlying benefit of time management incorporated in his work, “What if graduating seniors already knew full well how to balance jobs, studies, family and volunteer work in the surrounding community?” Students learning how to balance class, a job, homework, and volunteering will greatly appreciate this action in their futures. Eggers giving us his personal experiences let us know that he has hard evidence against his claim. Students having the option of the “exchange program” gives them motive to work which will help the community. The facts and statistics say it all, if the community could gain 2 million or more service hours a year all because of a student participating in volunteer work once a month, could this be such a bad idea after all? Think about your college years; was there a lot of empty time? Did you goof off a little too much instead of doing something useful to pass time? Could you have volunteered to better yourself and your community in your spare time?

Studying Due to Serve or Fail. (2016, May 19). Retrieved from https://studymoose.com/studying-due-to-serve-or-fail-essay 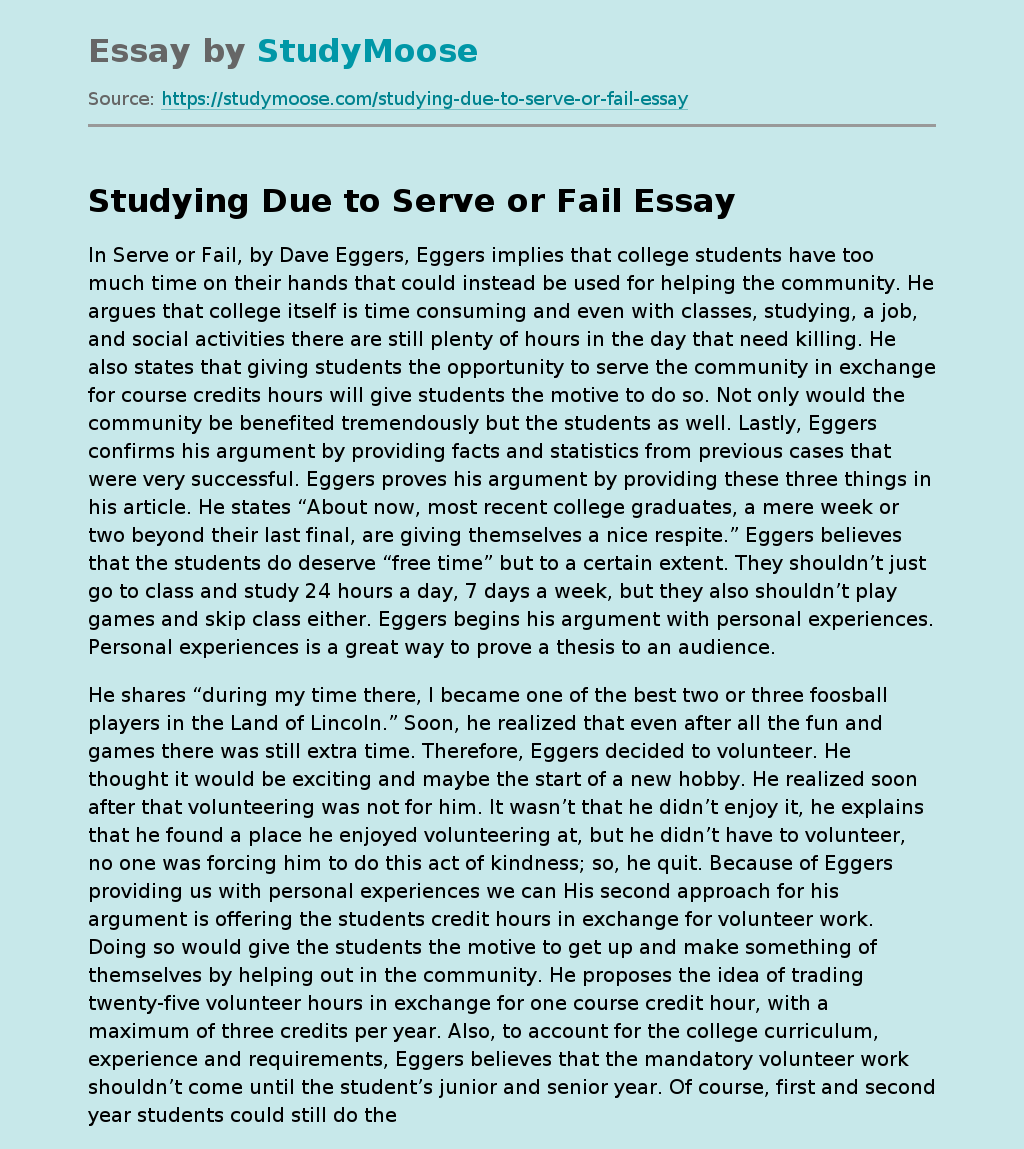