This study is a quantitative-descriptive in nature where the purpose is to describe the level of student’s satisfaction on services provided by the school towards the enrollment system through quantitative research method to quantify and reflect in numbers the observation made of the respondents being studied (Sampa, 2012). It attempts to explore and explain while providing additional information about the topic. This is where research is trying to describe what is happening in more detail, filling in the missing parts and expanding our understanding.

Don't use plagiarized sources. Get your custom essay on
“ Student’s Satisfaction of Enrollment System Research ”
Get custom paper
NEW! smart matching with writer

This is also where as much information is collected as possible instead of making guesses or elaborate models to predict the future – the ‘what’ and ‘how,’ rather than the ‘why.’ The researchers used a modified questionnaire which answers the first two objectives of this study which is the extent to which students meets and/or exceeds their expectations and perceptions towards the enrollment system provided by the University of Mindanao.

The respondents of this study were the students of University of Mindanao selected randomly according to their year level and their type (freshmen, old student, and transferee).

Population, statistically, refers to the entire aggregate of items, i.e., group of people or element, who shares common set of characteristics or interest, from which samples can be drawn, in which the researcher wishes to investigate. University of Mindanao has large population of students from both Bolton Campus and Matina Campus, hence, the population refers to the University of Mindanao students who are enrolled in Matina Campus.

Sampling Frame refers to the target population. In this study, 60 respondents was selected from students currently enrolled in Matina Campus.

The researcher chose the simple random sampling whereby every element is selected independently and the sample is drawn by a random procedure from the sampling frame. Sekaran(2003) as cited by Abdullah (2005) points out that through simple random sampling technique, all elements in the population are carefully weigh and each element has an equal chance of being chosen as the subject. If the main objective of this study is to generalize the ability of the findings to the whole population then, this sampling design is best suited.

It is concerned with how many people that should be surveyed. The sample size larger than 30 and less than 500 are appropriate for most research (Roscoe (1975) cited by Abdullah ( 2005)). It is believe that large sample generates inevitable results than smaller samples. However, it is not necessary to sample the entire target population or even a material portion to have reliable results. With this, the researcher only chose 60 sample units as the sampling size randomly due to the time constraints, cost and other human resources. Sixty questionnaires were being distributed to respondents who are currently enrolled in Matina Campus.

The researchers used a survey questionnaire in checklist form. This instrument was modified by the researchers to establish the level of student’s satisfaction on enrolment system provided by University of Mindanao. The instrument determined, among others, the gender, type of student (freshmen, old student and transferees), and year level of the respondents. The Itemized Rating Scale survey was the selected questionnaire type as this enabled the respondents to answer the survey easily. Though, it is somewhat similar to Likert Scale but it uses other than agreement /disagreement item statement. This rating scale requires the subject to indicate his or her level of satisfaction to a statement. In this type of questionnaire, the respondents were given five response choices. 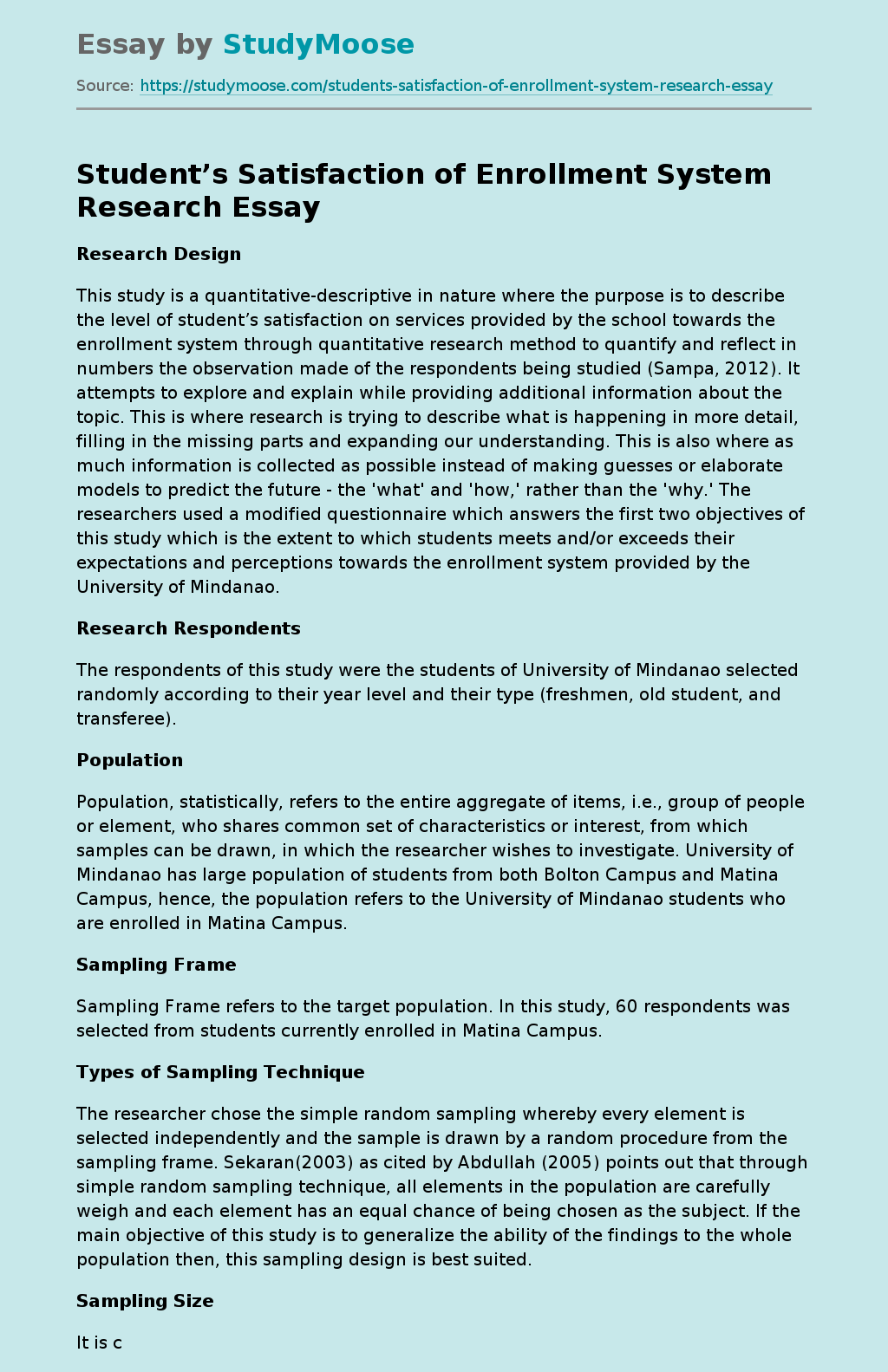