Structuralism aims to reveal the universal structure of language as a constructed system of rules.

A major effect of applying Structuralism to literary works is to enrich them semantically, because structuralism works by discovering correlations between correlations, it can never treat any element of a text, if it were not at least potentially able to be correlated with some other element, of plot, or character, or whatever.

Perhaps the most pervasive genre of literature in the 21st century is the novel.

Don't use plagiarized sources. Get your custom essay on
“ Structuralism ”
Get custom paper
NEW! smart matching with writer

The first thing most people think of when they hear the word ‘novel’ is a relatively long narration in prose, in which different characters appear. Something exciting or remarkable happens to these characters, who are people with whom we can somehow identify (or would like to identify, since we obviously aren’t like them) because they somehow act in a (re)cognizable world (Bode:2011). While Bordwell (2001) said that a novel is an invented prose narrative of considerable length and a certain complexity that deals imaginatively with human experience, usually through a connected sequence of events involving a group of persons in a specific setting, is called a novel.

In its characteristic form, it is composed of several elements. It has a plot, meaning that something happens, require characters – agents to bring about or react to the events, happen somewhere setting of place, it can be a real place or a real place in an imagined future or can be fashioned by the author’s imagination. Novels and short stories also express a particular point of view.

Some stories have an omniscient narrator one who knows what’s happening to all the characters all the time and who speaks of them in the third person. More complicated are the stories told from the perspective of an unreliable narrator (Kuiper:2012)

Motion pictures or movies/films are so much a part of our lives that it’s hard to imagine a world without them. We enjoy them in cinema, at home, in offices, in cars and buses, and on airplanes. We can easily go to a cinema and choose any film we want to see or just simply download a single film on internet and put it into a flash disk, bring it home and watch it through DVD Player or PC. Film is, nevertheless, inextricably tied in with the study of literature. Films communicate information and ideas, and they show us places and ways of life we might not otherwise know. Films offer us ways of seeing and feeling and take us through experiences. The experiences are often driven by stories, with characters we come to care about, but a film might also develop an idea or explore visual qualities or sound textures (Bordwell:2001).

Film makers planned stories carefully and chose techniques in full awareness. Sometimes film makers work in a more intuitive way, but they still must choose one story development or another, one technique or another. Bordwell (2001) said that:

“. . . about the best way to tell the story, scene by scene. You make specific choices that you think are appropriate or compelling or interesting for that particular scene. Then, at the end of the day, you put it all together and somebody looks at it and, if there’s some consistency to it, they say.”””

Many of us use the two words film and movie synonymously in our everyday life. Although both these words have similar meanings there is a certain difference between them in technical meaning and usage. Both film and movie refer to a series of moving pictures, usually shown in a cinema or on television and often telling a story. However, film can also refer to the actual material that the film is recorded on. In addition, the word movie is mostly used in spoken language; film is mostly used in a formal and academic context (Hasa:pedia.com).

Citing from differentbetween.info, it said that the term ‘film’ is commonly applied to movies of an artistic or educational nature and is not expected to have broad, commercial appeal. Whereas, the term ‘movie’ is applied to commercial cinema aimed at a large viewing audience, in hopes of making profit. Both film and movie are a type of visual communication which uses moving pictures and sound to tell stories or help people to learn. They are a series of pictures arranged sequentially, which run in rapid manner to create an illusion of motion.

Film is a term referred to as the art of making motion pictures. It is the contemporary definition of cinema that communicates ideas, stories, perceptions, feelings, beauty or experiences by the means of recorded or programmed moving images along with other stimulations. Typically, a film is made by big productions, which includes art directions, casting and creation of scripts, and fabulous sets. It is usually projected on big screens as in the cinemas. A feature film has a running time of more than 60 minutes and a short film has a running time of 40 minutes or less. Movie is often regarded as slang for a film. People in every part of the world watch movies as a type of entertainment, a way to have fun. A movie includes dialogues, music and sound effects. It has a screenwriter, who writes the script, which is the story of the movie, a producer who hires people to work on the movie; the actors who act in the movie and the director who directs the movie. The actors memorize the words from the script that they have to say in the movie, and learn the actions that the script tells them to do. Then the director tells the actors what to do and a cameraman takes motion pictures of them with a motion picture camera. When filming is finished, an editor puts the moving pictures together as a story, within a set amount of time. Audio engineers and sound engineers record the music and the singing, which is joined to the picture. When the movie is done, many copies of the movie are made by movie labs and put onto movie reels and sent to the cinemas. The movie is now ready to be played in the big screens.

A plot is all about establishing connections, suggesting causes, and showing relationships. A Greek pilosopher, Aristotle introduced his idea of plot that called as basic triangle. The basic triangle consists of protasis as the introduction, epitasis as the middle, and catastrophe as the resolution. As time goes by Aristotle’s basic triangle being modified by a German novelist and critic of the nineteenth century Gustav Freytag. Freytag modified the triangle into a pyramid by added two other level of plot structure called as Freytag’s Pyramid. Based on Freytag’s Pyramid the plot structure devided into exposition, rising action, climax, falling action, and resolution.

Plot Based on The Criterion of Times

On the criterion of times order the plot is differentiating into three parts: progressive plot, flashback plot, and mixed plot.

First, the progressive plot, is a plot in a story when the events are shown chronologically, the first event is followed by the next events. In other word the story starts from the earlier step (situation, introduction, and conflict) then the middle step (rising conflict, and climax) and finally the last step (solution).

Second, flashback plot is the plot in a story when the time order of the event is regressive or not chronologically. It means that the story is not started from the earlier step but from the middle or from the last step and then back to the beginning before reach the final. This plot serve conflict directly, event of the conflict that almost reach climax, while the readers have not known the situation and the problem yet.

Third, the mixed plot is the mixture between progressive plot and flashback plot. Because mixed plot have two kinds of plot, so it is difficult be done, and almost none novel use mixed plot.

Plot Based on The Criterion of Number

The other plot is called sub plot, it develops a story by giving more than one plot and characters in it. Its structure contains a main plot, some additional plots (sub-plots) based on the order of importance and the role of characters in the story. Sub plot means the series of event that is related and become a part of the main or the first plot but still have a distinctive feature it self. It is possible in a sub-plot has parallel with another sub-plot. This term is a kind of efforts to stick out of the show the significance of the story. Staton (2007:27)

They are plot of fortune, plot of character, and plot of thought.

Plot of fortune characters connects to a story that tells about the luck and the fortune of the main character’s destiny in a novel. He divided this plot into six kinds, they are: action plot, platonic plot, tragic plot, punitive plot, sentimental plot, and admiration plot.

Plot of thought tells something that will become a way for the readers to think about willingness, feelings, kinds of obsession and the other things that can be mentioned as the problems of human life generally. Plot of thoughts is differentiated in to four categories: education plot, revelation plot, affective plot, and disillusionment. 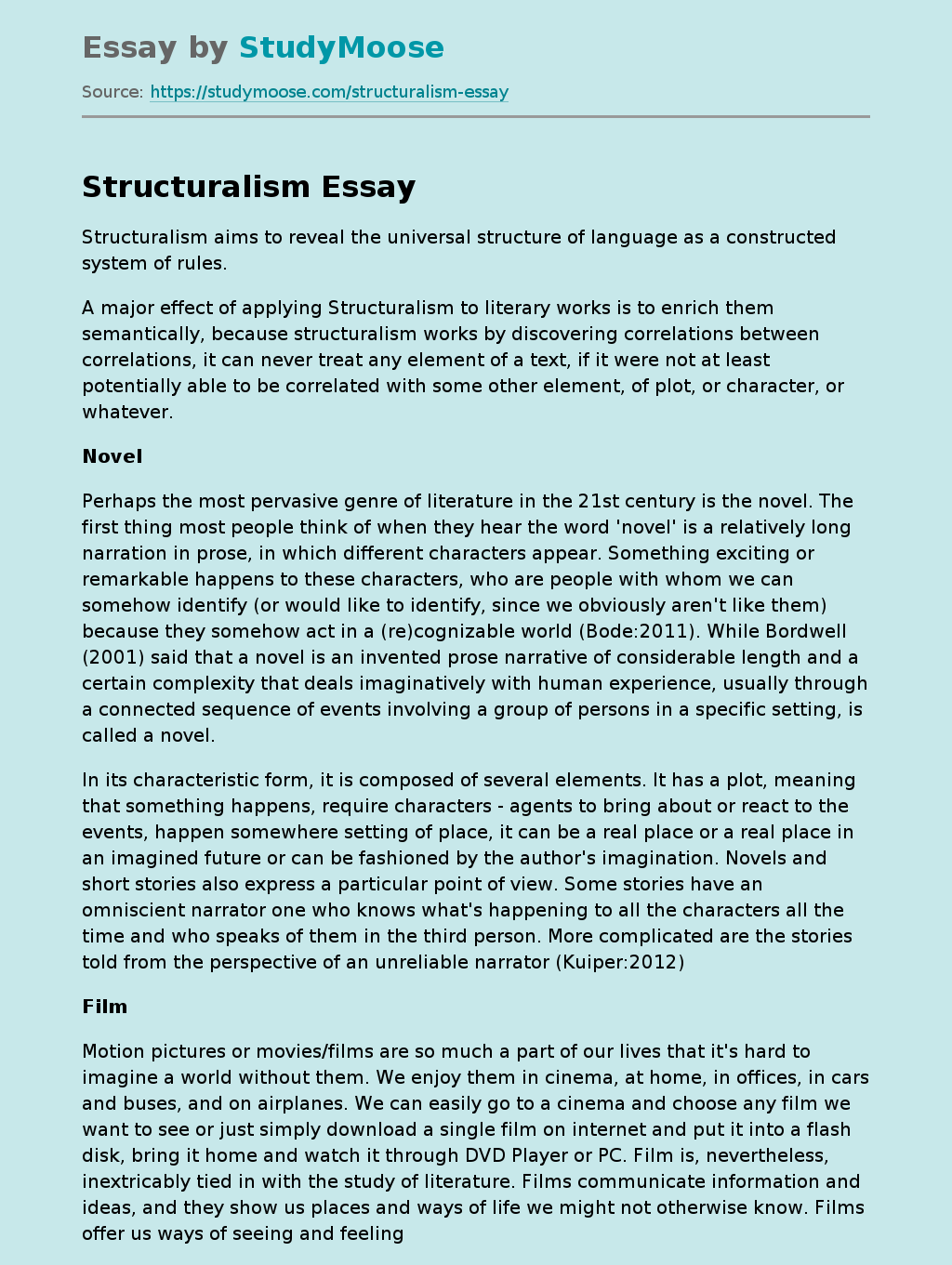