According to the definition of the UNICEF, a street child is someone from whom the street has become his or her home and source of living; and who isn’t protected by responsible adults. Thus, the term “street children” refers to children who work and live on their own on the street. Because it is difficult to obtain precise statistics about street children, information about their number and ages is approximate. It is estimated that at least 10 million street children live in India, and most of them are between 6 and 12 years old.

Don't use plagiarized sources.
Get Your Custom Essay on Street children in India Just from $13,9/Page

The majority of them are boys, with little or no education. Indeed, a 2004 study in Mumbai revealed that 60% of street children had never attended school and were illiterate.

They often choose to leave their families and homes for strategic reasons. In a study of 1,000 street children living in Mumbai conducted in 1990, 40% of them said they left home because of problems and fights with family, 20% said they left because of family poverty, and 4% said that they wanted to see the city.

This study illustrates the trend found by many researchers: most of street children leave because of family problems, such as death of a parent, alcoholism of father, violence, abuse and extreme poverty. Most children who leave their home come from slums and low cost housings, both areas of high illiteracy, drug use and unemployment.

As they must provide for themselves, they have to work. They have no choice but working in the informal sector, so they suffer from harsh working conditions and low wages. In Mumbai, 50 000 children are illegally employed in 12 000 hotels, restaurants… Because of their lack of protection from a family and the law, employers often exploit them, making them their virtual prisoners, sometimes withholding pays, mistreating and abusing them. Because of all these reasons, street children often choose to be self-employed. Jobs include cleaning cars, selling in the streets, shining shoes, prostitution, pick-pocketing, begging… They often have to work from 8 to 13 hours each day. Money that is not spent on food is usually quickly spent on other things because older children and police often steal their money. Thus, they aren’t able to save their money and are forced to live from hand to mouth.

As they have to face harsh living conditions, they develop a tough exterior and strong independence to hide their vulnerability. They often use violence to survive, and some consume drugs, alcohol or visit prostitutes. However, street children aren’t entirely on their own, they may be part of a group of other children. Though these groups bring safety to most, younger children are sometimes used by the leader to steal or do other illegal activities. Moreover, they face additional vulnerability because of their lack of access to nutritious food, sanitation and medical care. A study conducted in 2002 in Kolkata found that 6 in every 550 street children from 5 to 14 were HIV positive.

In addition, they are often exposed to abuse and extortion. Because they have no social status and no family to protect them, they are physically threatened by adults, and especially by the police. The primary cause for this treatment is public opinion: most people despise them and react to them with hostility. Street children often report abuse by the Indian police: they are beaten, stolen, arrested, insulted and sexually abused with impunity.

To conclude, despite India’s rapidly growing economy, widespread poverty and violence remain deeply rooted across the country, and especially in rural areas. The Indian government has set in place various policy concerning the issues we’ve just discussed, but they appear to have been quite ineffective. However, the lack of supporting actions toward women, working poor and street children is a growing concern for the authorities and public opinion, so it seems many efforts will be made in the right way. First, the Indian government and other institutions have launched various social security programs for the working poor, such as the Social Assistance Programs (which provides food and allowances). But initiatives don’t only come from the government: Milaap, an online fun-raising platform created by entrepreneurs, enables people around the world to help the Indians. Second of all, the Indian government proposed a bill totally banning child labour last year, but it wasn’t debated in the parliament. The most important thing to do, is to enable these children to have an education, and thus, escaping from poverty.

As the government’s policies seem inefficient for the moment, many NGOs and private organizations conduct projects to provide street children with a decent home, clothes, food, medical care and good education. Even children themselves begin to act for a change: Children’s Voice newspaper is the only paper wrote for and by street children. Finally, on December 2011, the government set up the Justice Verma Committee to propose amendments to criminal law dealing with sexual offences. In response, the Parliament passed several acts to recognize acid attacks, sexual harassment and stalking as criminal acts. Unfortunately, these laws aren’t enough to stop harassment, women discrimination and, especially, rapes. Good solutions would be: more women police officers, real involvement from the police in general, proper sex education at school, more welfare and health spending for the poorest girls, changing of attitudes, focusing more on the attackers and less on the victims’ shaming… But pushing for change demands political leadership. Indeed, laws on paper give little protection, if they are not enforced effectively.

Poverty and violence in India

The working poor in India live in the same conditions as the non-working poor. Informal jobs: no taxes, no contract, no social security, no retirement pension, no employment security. Some people create their own school within the slum (informal school, because they don’t have a license). And the results are better than the results in a state school. License Raj: during British domination, if people wanted to do something, they had to get a license.

Street children are quite organized, they have leaders and they get protection.

Women suffer from gender inequality: lower status than men, domestic violence is not illegal, they don’t go to school because it is considered to be a waste of time and money (they are meant to stay in the house and they get married at the age of 13). Paradox: India is a country with many women in the government but where women are treated inhumanely. More that 70% of Indian people have cellphones.

Welcome to Bihar, the poorest and most corrupt state with the highest crime rate in the Indian Union. This region is the symbol of inefficient/deficient/dysfunctional India. There is no progress, only cast wars and politicians who seek power only for the sake of money. With 86 million inhabitants, this state is often described as India’s Far-West, where the police and justice are useless, where people are still living under medieval circumstances, victims of a corrupt political system. 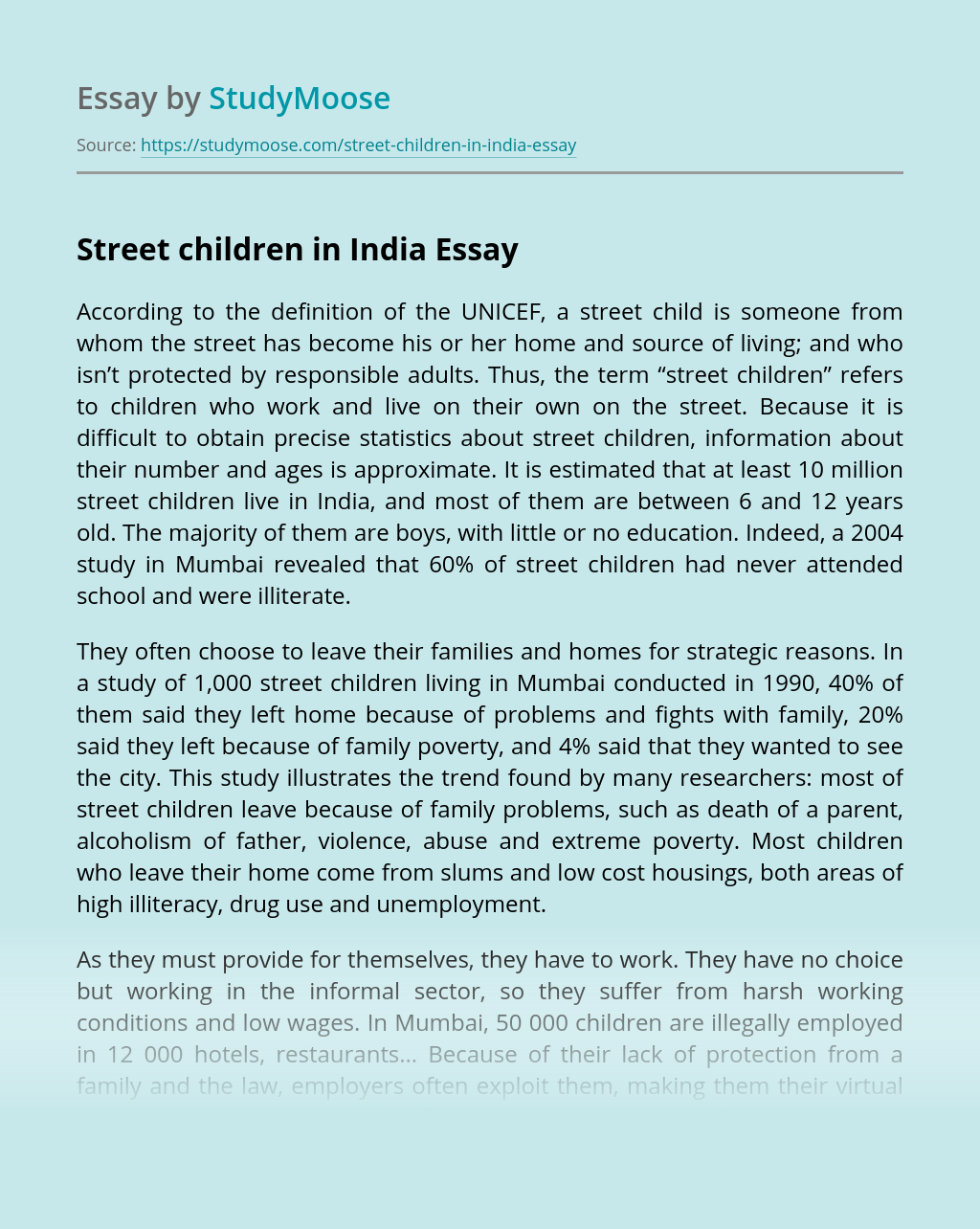 Why Some Children Have Imaginary Friends.

At young ages, the children learn to communicate through role playing with their imaginary friends. Mark Taylor de Fell, professor of psychology at the University of Crayola, concluded that 65 percent of all children have make-believe friends at some point in their younger lives for two important resons. Firstly, imaginary friends can serve many useful...

As a Filipino and youth of this country, I’ve appreciated UNICEF’s efforts in regards with the children who are in need. It is not easy to aggregate data of the country’s status just to check how are the citizens especially the children are treated and supported by the countries, particularly of their local governments or...