Social Networks are, on these days, the perfect way to communicate and keep in touch with your friends and family, and even to let them know about your plans and lifestyle. The disadvantages of using social networks are commonly ignored by users. I must say, I used to do it too, until one day. That morning, as the sun was rising from beyond the mountains and gradually changing the color of the sky from dark to blue. My day was starting like any other day; I brushed my teeth, took a bath, got dressed, went to class the whole morning, and then spent the rest of the day studying in the library.

Don't use plagiarized sources. Get your custom essay on
“ Stranger Danger in Social Networks ”
Get custom paper
NEW! smart matching with writer

But my day took a sudden change when the sun was dying in the dark and made the sky black.

I saw my friend Johanna approaching my table in the library. She was my best friend for around three years in primary school. A great joy gushed from my inside, because I was finally getting in touch with one of my best friends from school.

I had not seen her since our school graduation, so we have many things to talk about. She was not like I used to remember her. Now she is skinny, looks very secure of herself, wears a different type of clothes, her skin is pale like an eggshell and her hair is blonde. She was not even close to the fatty, insecure, brunette that I used to know. When she first looked at me, I saw a smile drawing on her face; she was as glad to see me as I was to see her.

Abruptly all changed when she began talking about what was going on in her life.

I saw how the big smile that her face displayed would be dispelled when I asked: How have you been these last three years? I immediately noticed that there was something bad happening in her life. She told me that she was no longer together with the boy who used to be her boyfriend in high school named Julio, who was also our classmate. It was a surprise for me, because I thought that they were made for each other, but nothing is what it seems. I thought that was the worst thing that she was going to tell me, but it was just the beginning. As the clock struck nine o’clock our time in the library came to an end, so we left. The night was illuminated by the new moon, the wind was calm like a desert and the temperature was cold as the winter. We continued our conversation standing in front of the library. We were getting along as a cactus on a desert.

A week after she ended with Julio, she started receiving horrible messages through social networks and cell phone from her best friend’s Facebook account, which was hacked since we were in senior class. The messages stated that she did not deserve Julio and the best that Julio had done was dumping her. I saw how her eyes were filled with unshed tears as she continued telling me her story. In addition to this, the stranger also put her mobile number on a prostitute´s website. Thanks to that, unknown people started calling her asking for her service as a whore. She had to cancel her mobile and all the social media accounts that she had. Eventually, she created a new Facebook and social media`s account, but only for her closest friends.

She returned to her course of life but when you have been through a situation such as this, your life will never be the same. After hearing this story, I went straight home and set my Facebook and Twitter accounts as private as possible. Social networks were not created for such a terrible use, but terrible people do exist. We should enjoy all these technologies, but carefully. We hear about other stories related to social networks and we believe that any of that can ever happen to us, but we are wrong. If you have a public social network you are also a target. 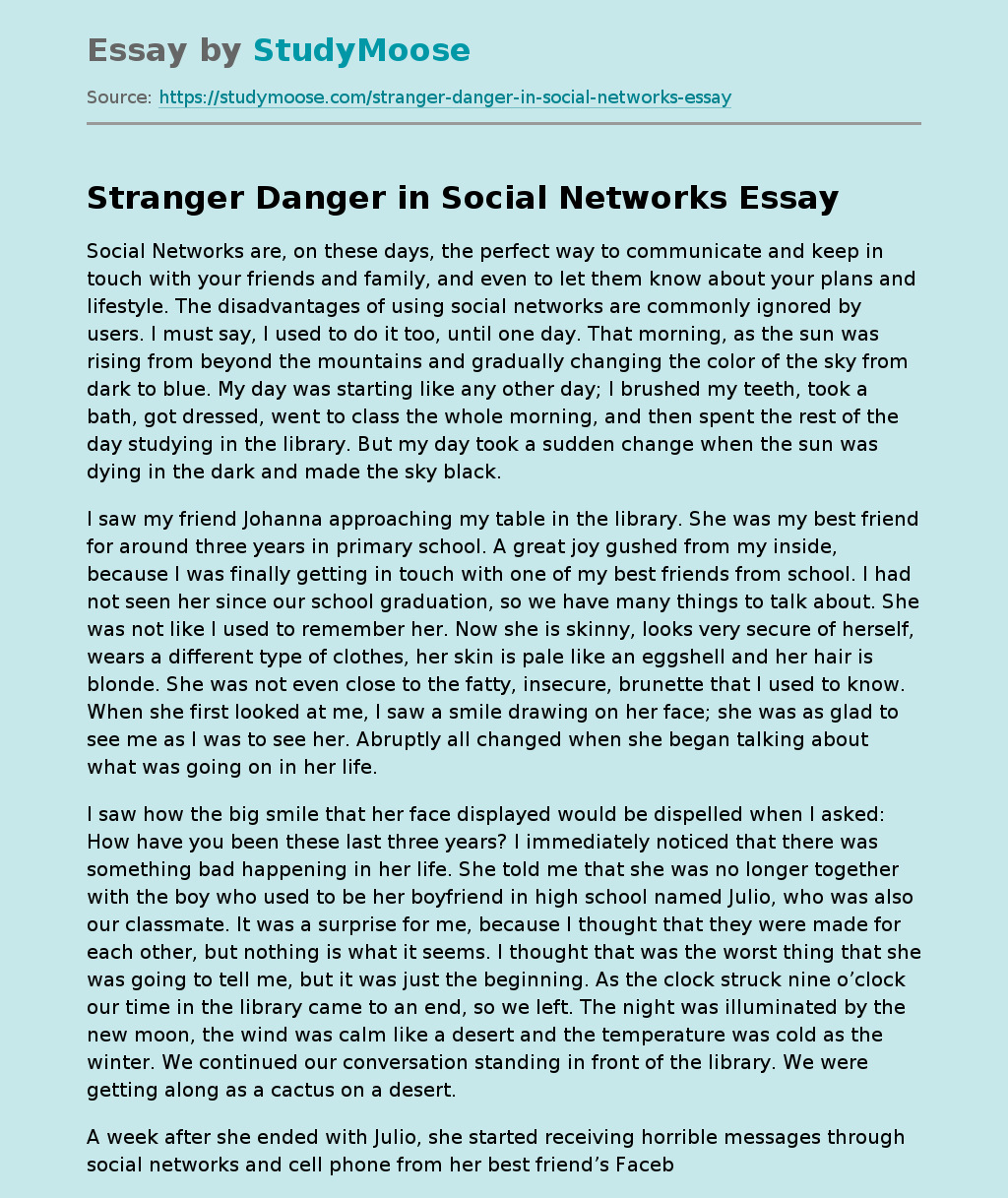