Story that Full of Symbolizes

Little Brother was written between May 7, 2007 and July 2, 2007. Exactly eight weeks from the day the author thought it up to the day he finished it. Little Brother was written by Cory Doctorow. Little Brother takes place throughout San Francisco neighborhoods from the Tenderloin to the Mission. Marcus Yallow tells the readers his story in retrospect throughout the entire novel. Since everything in the story has happened already he has time to sit back and relax and be a leisurely, un-panicked narrator.

Don't use plagiarized sources. Get your custom essay on
“ Story that Full of Symbolizes ”
Get custom paper
NEW! smart matching with writer

The events never seem to stop in Marcus’s story. In the Little Brother, whenever someone would say freedom or hear it, it would be just another word for nothing left to lose. Marcus’s parents won’t let him drink coffee, says it is an adult drink. However, Marcus buys it on his way to school anyways.

Games in the story symbolizes how well the games somehow train your to enter dangerous situations. This precedent of games preparing people for the unknown is well established.

Games, in the story, can be a serious business. This is a book about people needing to communicate quickly. And because of that, its narrator makes sure we quickly get to the point, whether it’s understanding how jamming works or why he decides to support his local coffee spot.

The lottery was written by Shirley Jackson and first published in the June 26, 1948, issue of the New Yorker magazine. This is one of the most reprinted stories of all time, plus it has been adapted for radio, television, two films, two plays, an opera, and a ballet.

While Jackson wrote the story, she left symbols in it as well. For example, the black box, as she describes it as battered is a symbol for how long the lottery has been going on for. What we think of the lottery is a good thing, but in this story it is a completely different thing.

In this story the town gathers around and waits in silence and horror for whoever draws the black mark on the paper shall be stoned. The work has been written so well, it’s so mysterious, so wonderful so much so that it was reprinted so many times because so many people had liked the story and had wanted it reprinted. People liked the story since it was mysterious and frightful in regards of weather or not you got the black dot or not.

The lottery was a miserable and terrifying thing they had to experience. On that very day, the townspeople were silent in knowing someone would soon be stoned. It has been said that in most villages they have to use two days for the lottery since there were so many people in those particular villages. But, in this village since there were only 300 townspeople the whole lottery could take less than 2 hours.

The Ones Who Walk Away From Omelas is written by Ursula K. Le Guin. It’s premise is based on a moral quandary posed by philosopher William James, who imagined how hideous happiness would be if it were predicted on the suffering of a child. ‘The One Who Walk Away from Omelas’ can be interpreted as a political allegory. The child living in misery under the city represents the under or working class, which supports the upper class with underpaid labor. In this way, the story can be read as a critique of capitalism, particularly in the United States.

Omelas still believes itself to be a utopia. Its idyllic setting by a shimmering sea and its exuberant Summer Festival, with the requisite games and horse riding, all indicate that Omelas earnestly thinks of itself as a perfect society. As Le Guin suggests, however, the existence of the abused child under the city taints that happiness, making the citizens of Omelas selfish and delusional.

Born of man and woman is written by Richard Matheson. The story was published in 1950. The story takes places in a cellar of a house, where a mother and father have hidden and chained away their child from the rest of the world. You can tell that the child hasn’t had any schooling based on how the story is written. The story is written in first person so the readers can know what the child has to go through on a daily basis and how awful they get treated by their parents. The child is a boy with how much abuse he has gone through in his life.

If I were to guess, his parents wanted a girl but got a boy and to their disgust they chained him in the cellar or basement. With all the abuse he has gone through the boy is still curious as the what certain things are. After all that has happened with the abuse and everything, the boy started to get angry at the fact that he is in the dark basement rather than being upstairs with everyone else. At the end of the end of the story the boy was starting to get beat when he knocked the stick out of his father’s hand and started to think that the next time either his father or mother beats him he’s going to hurt them back. He has decided that he has had enough of their abuse.

The Book of Sand is written by Jorge Luis Borges. The story is written in first person point of view. The story was first published in 1975 in one of Borges first collections. The story is a take of how a man becomes obsessed with a book that has an infinite number of pages. The story contains several themes that Borges has used throughout his entire life. For example, magical realism and the illusion of reality in fiction, obsession and the overwhelming nature of the infinite and self-reference, or “the breaking of the fourth wall.” The Book of Sand also has parallels compared to another piece of Borges’ as well as his life. He had gone blind before writing the story. The book was adapted into an experimental dance piece, a Webby award winning online film, and a digital interactive song cycle.

Mars is Heaven was written by Ray Bradbury and published in 1948. For the plot of the story a group of space explorers are on a voyage to Mars from Earth. As they land they are bewildered to see that the planet looks just like earth 30 years in the past. Cautiously, the captain of the ship takes two men to explore, while the rest of the crew stays behind. Things only get more bizarre from here as one of the crew members discovers his grandparents live there, and they have been dead for years! Similar cases for the rest of the crew as they all break up and spend time with their respective families. However it is too good to be true when they lost family members turn out to be aliens, and kill the entire crew then destroy the shuttle.

There was also plenty of symbolism in this story as well. There was plenty of symbolism in this story. The small town which represented comfort, love, and happiness. The lemonade with the ice dinging in the glass was also an example, which represented that comfortable and traditional homey feel. Even the 10 cent cigars and the brass band were all clever illusions on part of the aliens to tie into those existing feelings of the astronauts. The aliens sensed the astronauts were far from home and probably weary and homesick, and therefore cleverly used visual tricks and forms of symbolism to tie into that feeling of comfort and home.

Story that Full of Symbolizes. (2021, Sep 17). Retrieved from https://studymoose.com/story-that-full-of-symbolizes-essay 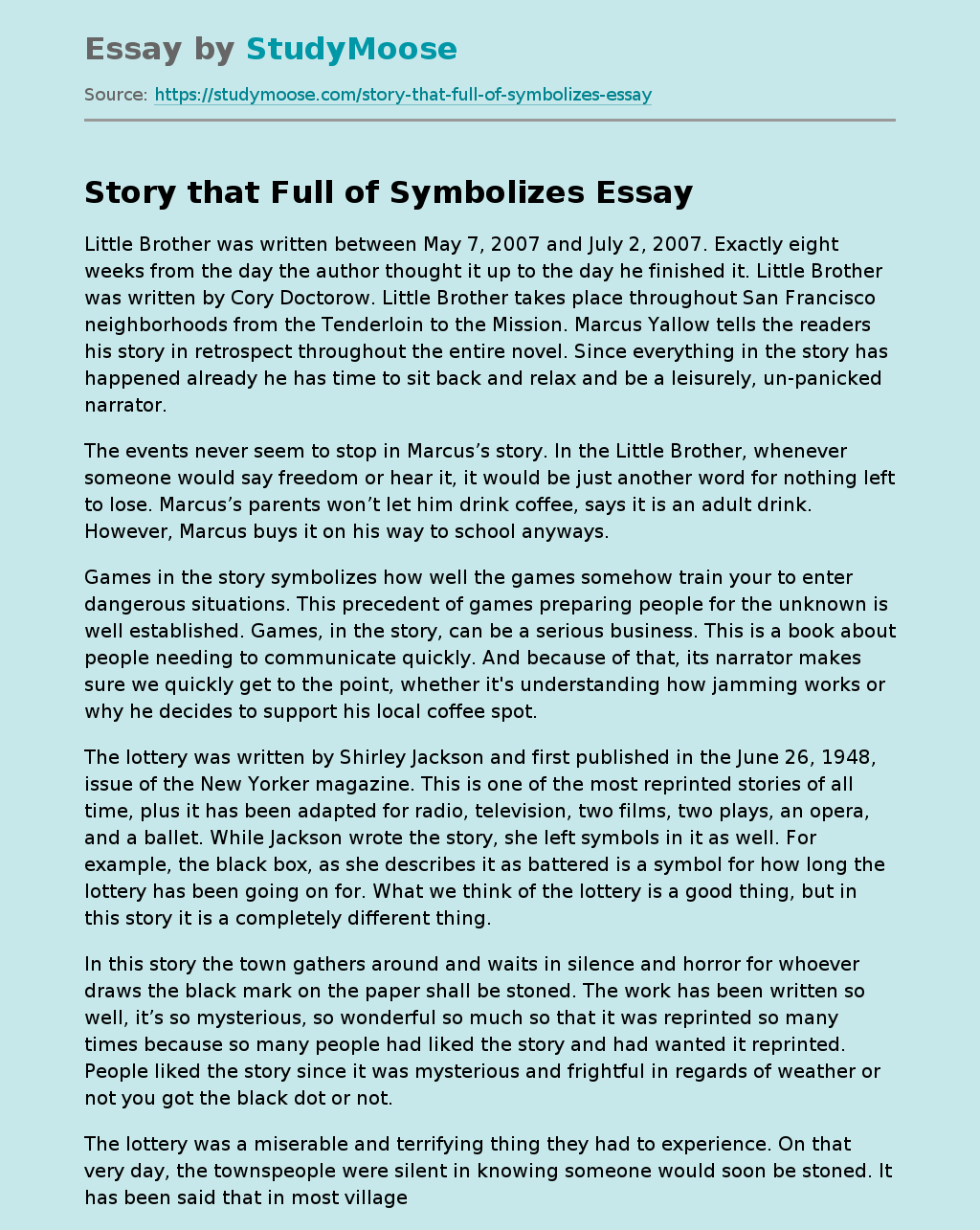