Chart Stevens’ realisation that Lord Darlington was not a “great man” and show how the author has integrated this into Stevens’ developing personality The novel “Remains of the day” is told mostly through Stevens’ memories on his life. One of the most influential characters in his past is Lord Darlington. Throughout the story Stevens reflects on their relationship, we see that the further away Stevens travels from Darlington hall, the more he realises the man he had dedicated most of his life to serving, wasn’t the “Great man” he had convinced himself he was.

Don't use plagiarized sources. Get your custom essay on
“ Stevens’ c personality ”
Get custom paper
NEW! smart matching with writer

One of our first recollections of Lord Darlington is when Stevens is packing for his trip, He says: “I am in the possession of a number of splendid suits, kindly passed onto me by Lord Darlington himself”  From this quotation, Lord Darlington seems like the perfect employer, someone worthy of Stevens’ respect, The Lord of this grand old English house handing down his own suits to the butler.

The impression that we are left with, just before Stevens embarks on his life changing journey is that Lord Darlington is a generous and caring employer to his staff.

On frequent occasions throughout his journey Stevens finds himself standing up for and defending Lord Darlington’s memory. One of the most memorable for me, is when Mr Farraday jokes about Stevens’ relationship with Miss Kempton being something other than professional, in a friendly non intimidating way. However Stevens manages to take this as an insult of some kind and remarks to himself: “This was a most embarrassing situation, one which Lord Darlington would never have placed an employee” It seems like Stevens is trying to convince himself and his conscience that he had respect from Lord Darlington, it makes his memory of the things that happened under Lord Darlington’s authority less painful to remember.

This statement from Stevens turns out to be a huge contradiction as we later find out that Lord Darlington placed Stevens in far more embarrassing situations on a regular basis. On one occasion Lord Darlington asks Stevens to explain to his God-Son the facts of life, because he is too embarrassed to explain them himself. This job was past down from Sir David (the boys father) who also couldn’t bring himself to explain the “Birds and the bees” to him “Sir David has been attempting to tell his Son the facts of life for the last five years”

Now the buck has been past down to Stevens who has been treating the last few days as important world affairs. He has had the job of making sure everything is alright for the most influential people in the world’s visit, and now he is being asked to explain to a boy he has no connection with the facts of life. It is like a painful comedy to the reader, with once again Stevens being at the receiving end of it. It is obvious to the reader, though not yet to Stevens how much more embarrassing the latter situation was. Another embarrassing situation that Lord Darlington could have stopped was when he had two men around for supper to discuss the current world affairs, they found it highly amusing to humiliate Stevens for several minutes by asking him about political views etc. It was clear to both men and Lord Darlington himself that Stevens had no answers to their questions but instead of putting an end to it, they concluded

“You may as well ask a committee of the mother’s union The one man was using Stevens as a mere porn to get his point across to the other, while Lord Darlington stood by and watched his head butler get humiliated. Stevens recalls it as a rather painful memory, but not one of the most difficult he has been with faced with in his time. The views Stevens had at the beginning of his journey about the intentions of Lord Darlington being honourable and justified “I for one will never doubt that a desire to see ‘justice in the world’ lay at the heart of all his actions”.

Are later dismissed. Stevens chose to remember that particular statement because it was close to his own morals and standards, it shows that while Lord Darlington was making a mess of world affairs he had good intentions. His feelings towards the end of his journey are very different, Stevens finds himself doubting what Lord Darlington’s intentions and motivations were. Was it really to see justice in the worlds or was it for personal reasons? To support his old friend Herr Karl-Heinz Bremann. Stevens concludes that “Lord Darlington’s efforts were misguided even foolish” Lord Darlington too had been used. Stevens starts to act as if he’s aware that Lord Darlington wasn’t the “Great man” he once thought when he denies working for him on several occasions. He tells people that he wasn’t employed in Lord Darlington’s day. However he still tries to justify Lord Darlington’s behaviour to himself, he tries to convince himself that he was a good man with the countries best interests at heart.

Throughout Stevens’ loyal service he never once doubted Lord Darlington’s purity or motivation. But now, nearing the end of his journey he is finally coming to terms with the ‘real’ Lord Darlington, the one that the papers wrote about, the one that the people talked about. While under Mrs Barnetts influence Lord Darlington thought it in the best interests of his staff to sack two young maids, for no other reasons except for the fact they were Jewish. This clear-cut sign of anti-Semitism should have shown Stevens of how much of an ammeter in world affairs Lord Darlington really was. It was like Mr Lewis had said “His Lordship was an ameteur” Acting on noble instincts, he really had no idea what was going on in Europe or the world around him, he was just standing up for his mate, and having his mind changed by people in control, who were using him as a porn. He was allowing himself to be intimidated by an educated woman, this should have shown Stevens of Lord Darlington’s intentions.

To conclude, Stevens has spent the majority of his life serving what he thought was a “Great man”. He keeps trying to defend and justify Lord Darlington’s actions throughout the novel, because he doesn’t want to deal with the fact that his life has been based on lies, serving a man that neither respected him, nor deserved respect from him. His actions and motivations came from pressures and through friendships not as Stevens once thought to see justice spread throughout the world. The further away from Darlington Hall Stevens travels the more independent he becomes, seeing the world first hand not having to rely on books and second hand knowledge. This brings a whole new foundation for him to accept what and who his previous employer was. 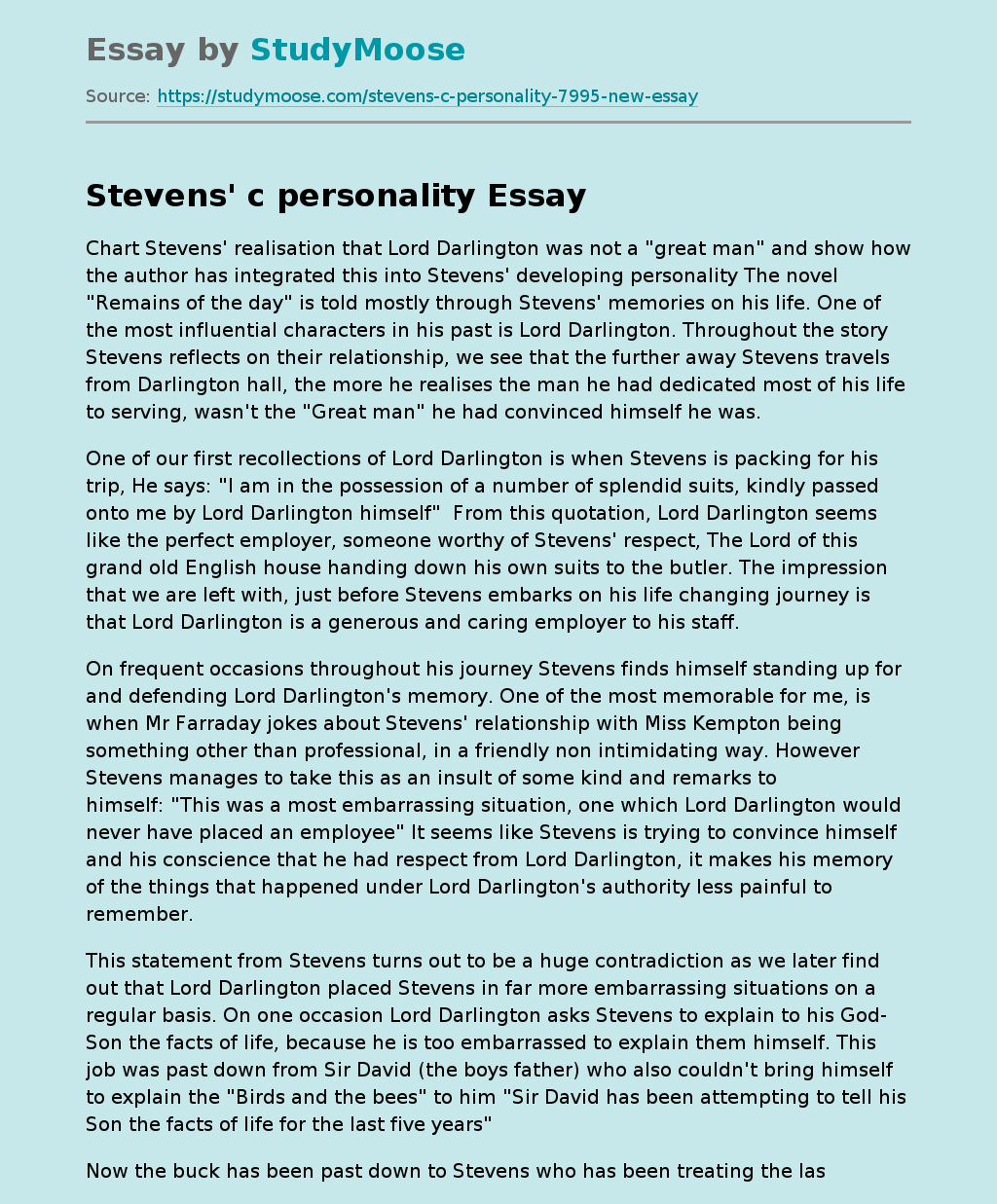