IPhones, iPods and other products starting with and “i” by Apple Company are just so amazing, they not only look useful, but also they have unimaginable good features and design, that not another company has ever manage to design and make. But the person behind this is even more unimaginable, and he is Steve Jobs: the great nonconformist who listen to no one disobey anyone he disagree with and the great visionary who knew what the customers want before the customer know what they want and also the innovator.

Don't use plagiarized sources. Get your custom essay on
“ Steve Jobs the Non- Conformist ”
Get custom paper
NEW! smart matching with writer

While some see them as the crazy ones, we see genius. Because the people who are crazy enough to think they can change the world, are the ones who do.for example like Steve Jobs. He did what he wants, and ignoring any one who disagree with him and he was persistence and had a strong will.

Steve Jobs was born in San Francisco and was adopted before birth by Paul Jobs and his wife Clara Jobs on February 24, 1995. Steve Jobs was the CEO of the well-known company: Apple.

But becoming the CEO wasn’t not easy at all, he had to made many unconventional decision, and also do many unconventional things. This is want make people famous, by being a great nonconformist, and this is exactly what Steve Jobs has achieve. At an early age he received really average mark, but he manage to get into a university. But after one semester he dropped out. But he claims that that was the best decision he has ever made, because he didn’t have to study subject he didn’t like, but took classes he like and interested him.

After the introduction of the graphical operating system, in 1985 the board director forced him out of his own company. Still thirty years old. He went to work for Pixar and made with films like Toy Story, in the credits he was also credited the executive producer, and made millions of money. That alone could be enough.

But no. Steve Jobs stay hungry; stay foolish as he quoted at Stanford University in 2005. Jobs left Apple and founded NeXT, a computer platform development company specializing in the higher-education and business markets. Under Steve’s leadership NeXT introduced the first NeXT Computer in 1988, and the smaller NeXTstation in 1990. Sales of the NeXT computers were relatively limited, with estimates of about 50,000 units shipped in total. Nevertheless, its innovative object-oriented NeXTSTEP operating system and development environment were highly influential, and made much more money at NeXT. In 1996, Apple announced that it would buy NeXT for $429 million.

The deal was finalized in late 1996, bringing Jobs back to the company he co-founded. Under Jobs’s guidance the company increased sales significantly with the introduction of the iMac and other new products including many popular products like iPhones and the iPods; since then, due to the appealing designs and powerful branding which no other company beside Apple has done. Not only did he revolutionize the computer industry, he also revolutionized the music, the portable music library device and the movie industry. Other than thinking different with his visionary skill, he also acted differently like I just mentioned. Other things Steve Jobs do differently is that he focuses on a specific product. Which is why he creates such unimaginable products.

Although he died on October 5, 2011, but he is still widely described as a visionary, pioneer and genius—perhaps one of the foremost—in the field of business, innovation, and product design, and a man who had profoundly changed the face of the modern world, revolutionized at least six different industries. 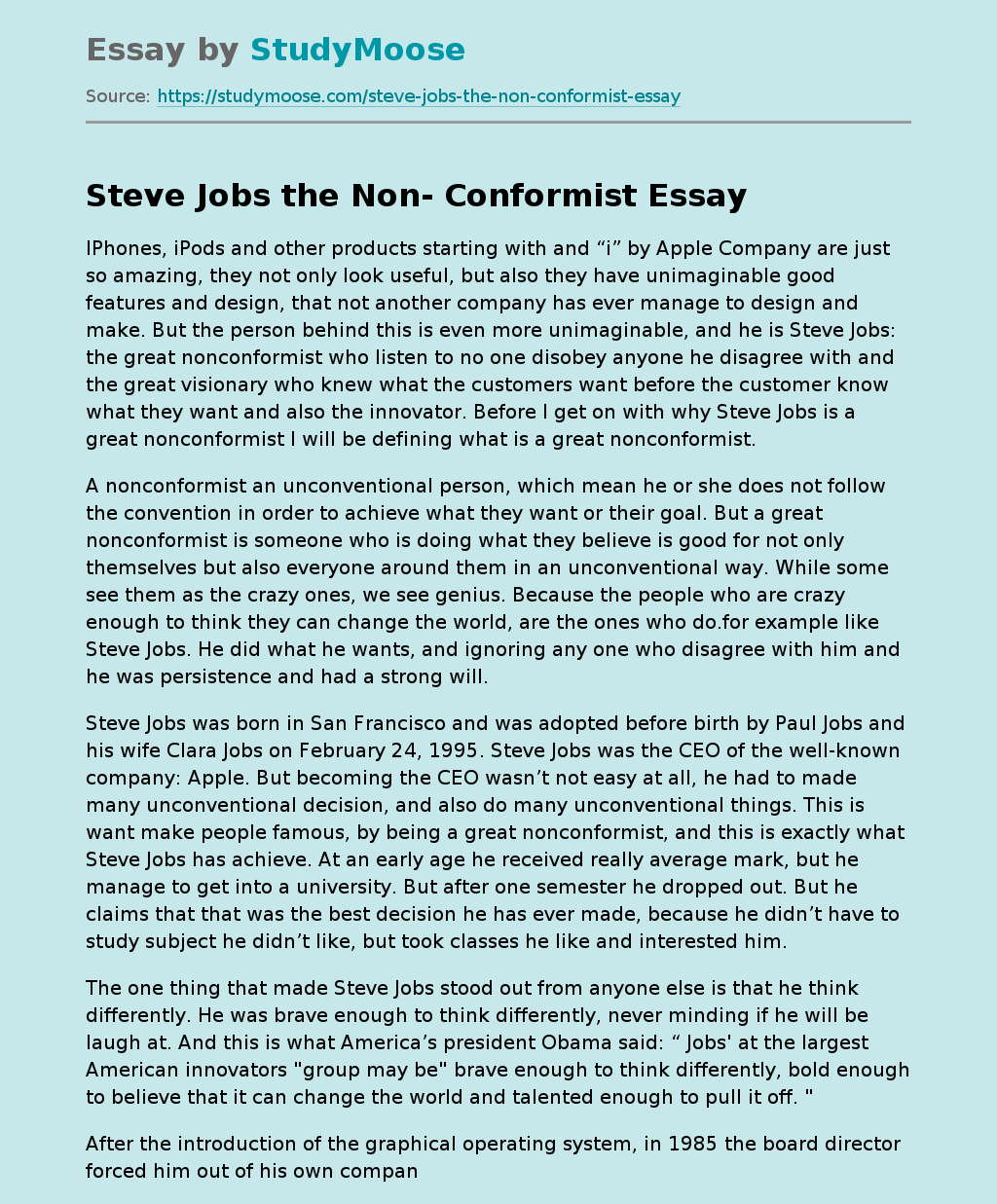