1. Five elements of leadership that applies to Steve Jobs leading Apple a) Leaders-follower
>Effective leader influences follower and their followers influence them. Effective followers share their idea and as a leader, they need to listen to others and implement their ideas to be effective. Apple is creating something that they like and what they think the customers will like as well, so Apple keep on innovating new products for it’s customers. b) Influence

>Influencing is the process of a leader communicating idea, gaining acceptance of them and motivating follower to support and implement the ideas through change.

Influencing is about power, politics and negotiating, and it is also about the relationship between leader and followers Steve Jobs has influenced five industries: computer, Hollywood, music, retailing and wireless phone/telecom. He is an influential founder of the PC industry. He also started NeXT and he contracted with Disney to create couple computer animated feature films. His innovation in iPod and iTunes store definitely affected the retailing of music.

While iPhone influenced to the wireless phone/telecom. c) Organizational Objective

>Influence the followers to do goods not only for themselves but also to the organization, set clear goals and outcomes that both wanted. Steve Jobs mentioned, “Apple’s success comes from simply trying to make great products that we want for ourselves and then hope that customers love them as much as we do.” d) Change

>Effective leader and followers must be open to change and are willing to take risk and try new things.

Steve Jobs is a visionary; Apple has continual and artful innovation in every aspect of its business. The launch of I pad was month ahead of the others e) People

>Effective leadership is all about working with people, it is the collective efforts of all people contributing that make things happen. Steve Jobs was said to be an outspoken ad not afraid to anger employees and customers. Even many who feared him also had great respect for him as he did inspire loyalty, enthusiasm and high level of performance through continuously innovation.

2. Steve Jobs strongest skill is probably the decision-making skills, just like a lot of other top level managers. Decision making skills is about conceptual, diagnostic, analytical, critical thinking, quantitative reasoning, and time management skills, it is also about being creative, perceive trend, anticipate changes and recognizing problems and opportunity. Steve Jobs has so many creative ideas and he willing to risk for new changes and innovation, just like the ipad, he launched ipad to the market one month ahead of other competitor.

He knows exactly what he’s looking for, he’s very demanding about his product, he has send products back to the lab continuously and kill new products. 3. As a CEO of Apple, Jobs majorly played as the figurehead role, entrepreneur role, monitor role and spokesperson role. The most important would be the entrepreneur role, which include developing new or improved product, initiating improvement. Jobs is a visionary, he kept bringing new and innovate idea about his products, like the iTunes and iPhones, etc. He is willing to take risk on developing new products and he made sure everything about his products is perfect.

4. I think this case is focused on the group level of analysis. This is case is about Jobs, the leader and the relationship with his group. It described how much Jobs idea and his personalities have contributed to the group’s effectiveness which leads to the success of Apples.

5. Leadership theory classifications applies to this case
a) The Trait Theory Paradigm
>This theory attempts to explain the distinctive characteristic accounting for effective leadership, but no one can come up with a list of traits that guarantee successful leadership. In our Apple case, Jobs is a very controversial figure, he is very innovative, inspiring, smart but he is also very controlling, aggressive and temperamental. b) The Behavioral Leadership Theory Paradigm

>This theory attempts to explain the distinctive style use by effective leaders. The two generic dimension of leader behavior are task-oriented and people-oriented leadership. In our case, Jobs is more a task-oriented leader, he is not a people person, but as we all know his is brilliant at his work. c) The Contingency Leadership Theory Paradigm

>This theory attempts to explain the appropriate leadership style based on the leader, followers and situation. Apple is a company selling technological product, and it requires constant improvement and innovation and that is exactly what Jobs is very good at, so this is a very important reason why Jobs was so successful in managing Apple. d) The integrative Leadership Theory Paradigm

> This theory attempts to combine the trait, behavioral, and contingency theories to explain successful, influencing leader-follower relationships. Jobs use a more entrepreneurial style to manage the Apple Company. He has his own unique way and style to manage the company, although it can be quite tough and breath taking for the employees. It ends up working perfectly for the company. e) Management to the Leadership Theory Paradigm

> This theory is talking about how the old autocratic management style is no longer enough for the new environment; we have to integrate both the management and leadership skills. Jobs of course did very good in the leadership part. In addition to the big roles described above, he also got involved with all parts of Apple — and no detail was too small not to matter to him. He personally picked the caterer for Apple’s cafeteria, Il Fornia, calling his predecessor’s menus ‘dogfood’. Later, he made sure that the sushi bar offered “sashimi soba”, an original creation of his. He once called Google executive Vic Gundotra on a Sunday morning to change the yellow gradient in the 10-pixel Google logo on the iPhone Map app 6. I don’t think apple will go back to crisis or near bankruptcy again, apple is now a well-developed brand, and he personally names the new CEO Tim Cook as the new successor of Apple, I just think that Apple may not be as great as it used to be when Jobs was still here, but it is still going to be a very competitive company in the market. 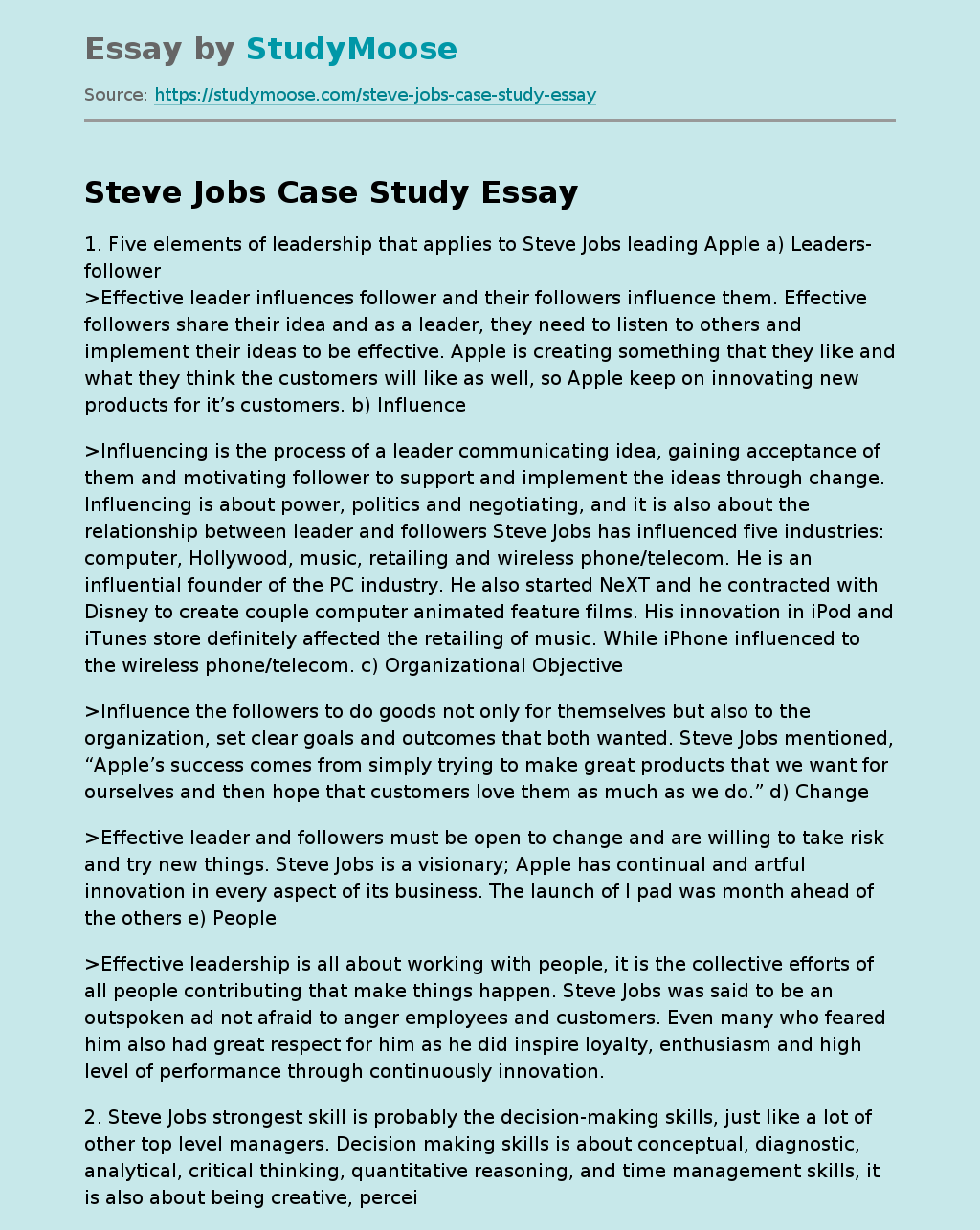