Stereotyping, prejudice, and discrimination are a part of everyday lives. A set of generalized beliefs and expectations about a specific group and its members is known as stereotyping. Stereotyping can often times lead to prejudice, a negative, or positive, evaluation of a group and its members. Common stereotypes and forms of prejudice involve racial, religious, and ethnic groups. Acting on these negative stereotypes results in discrimination which is a behavior directed towards individuals on the basis of their membership in a particular group.

Don't use plagiarized sources. Get your custom essay on
“ Stereotyping, Prejudice, and Discrimination ”
Get custom paper
NEW! smart matching with writer

(Feldman, 2010) Throughout this paper I will discuss why prejudice and discrimination exist, some examples throughout history and how to reduce it. Where does prejudice and discrimination come from? According to Robert S Feldman “No one has ever been born disliking a specific racial, religious, or ethnic group. ” (Feldman, 2010) People learn to hate. Stereotyping and prejudice behaviors come from parents, other adults, and peers. At a young age children are taught to have negative feelings about members of various groups.

This learning starts as early as the age of three. The mass media also teaches about stereotyping, not just for children but for adults as well. When inaccurate portrayals are a primary source of information about a minority group, they can lead to unfavorable stereotypes. (Feldman, 2010) Throughout history we have seen many examples of prejudice and discrimination. A well known example would be the Holocaust. During 1939 through 1945 Adolf Hitler was obsessed with clearing Germany of all foreign races including the Jewish population.

Hitler believed that the Jewish citizens were keeping the country from prospering economically, politically, and socially.

Because of this Hitler began to abolish German Jews and at the end of 1945 nearly six million Jewish people were murdered because of Hitler’s discrimination (RB 66). The Holocaust may have taken place more than fifty years ago in another country, but prejudice and discrimination is still alive today all over the United States.

The September 11th terrorist attacks have caused stereotypes, prejudice and discrimination to occur towards the Muslim religion. The Muslim religion follows the 6 Pillars of Islam, the last pillar is Jihad. Many Americans have the idea that Jihad means “Holy War” and that it is part of the Muslim religion to attack and terrorize other religions, when in fact Jihad means “The obligation to strive to spread the religion over the world”. Many religions also believe it is there duty to teach their religion, just how Christians have missionaries.

Both of these examples show just how serious discrimination can be. How can the world diminish prejudice and discrimination? According to Robert S Feldman, psychologists have developed several strategies that have proved effective. The first is to increase contact between the target of stereotyping and the holder of the stereotype research shows that increasing the amount of interaction between groups can reduce negative stereotyping. The second is to make values and norms against prejudice more conspicuous.

Just reminding people about the values they already hold regarding equality and fair treatment of others. Similarly, people who hear others making strong, anti-racism statements are subsequently more likely to strongly condemn racism. The third and most direct means of changing stereotypical and discriminatory values is providing information about the targets of stereotyping. Educate people to be more aware of positive characteristics of targets of stereotyping. (Feldman, 2010) Prejudice and discrimination is all around us.

No one is born to discriminate. Parents, peers and even mass media are teaching children as young as three to discriminate towards various groups of people. History has shown us just how far one person’s prejudice can go. It starts out as a basic stereotype towards one group of people and evolves into hate and discrimination that takes years to stop. Fortunately psychologists have seen the damage of prejudice and discrimination and have found that increase contact, demonstrating positive values against prejudice, and education are ways to reduce it.

(Feldman, 2010) Although prejudice and discrimination continues to exist Gandhi, Cesar Chavez and Martin Luther King have been strong examples of how to reduce it one day at a time. . 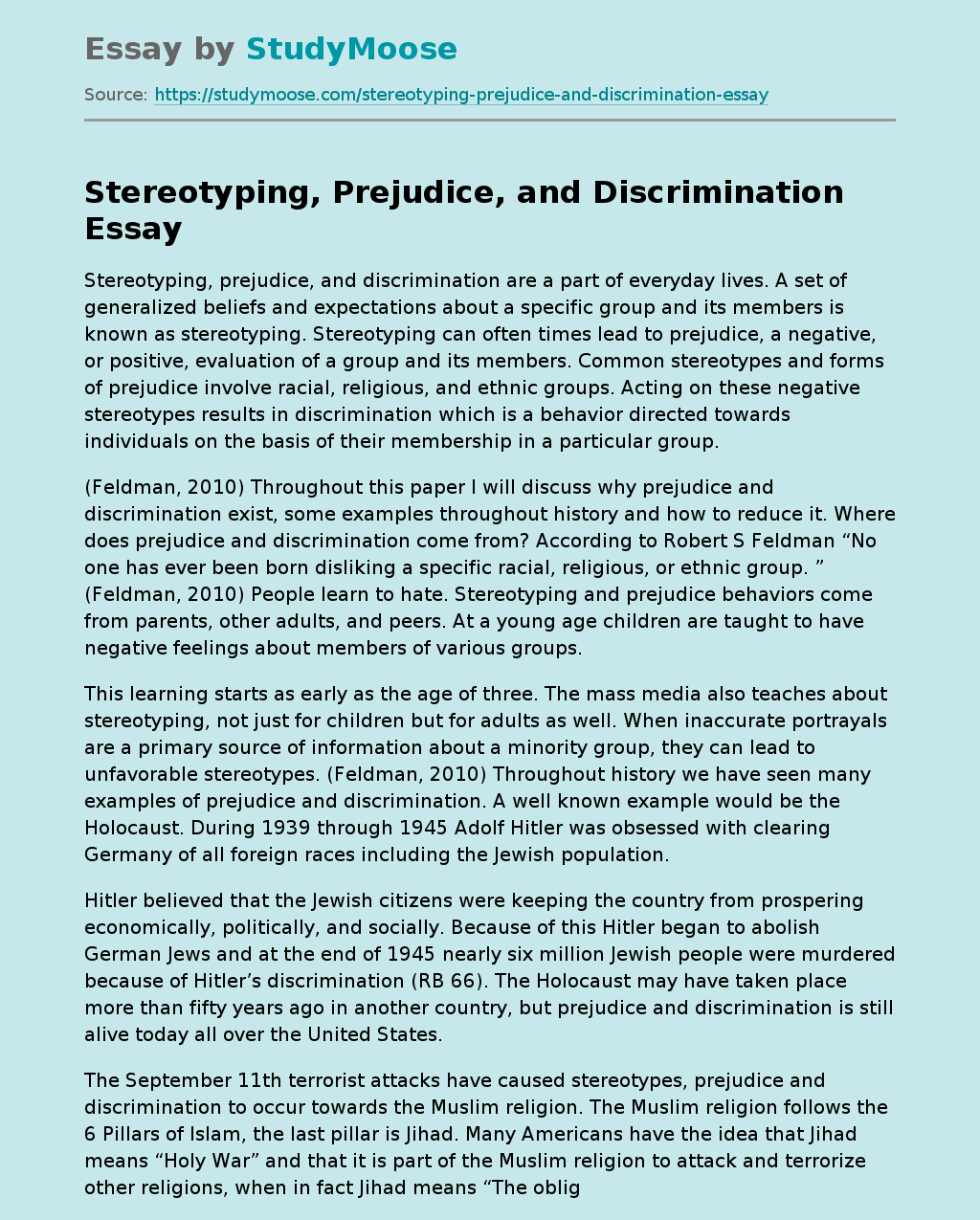