Before this study, a thesis called “Clothing Motives” was done by Ilhan Candas in 1985.

In that study, Ilhan Candas studied the motives behind people’s selection of different types of clothes.

Turn in your highest-quality paper
Get a qualified writer to help you with
“ Stereotypes of Physical Appearance ”
Get high-quality paper
NEW! AI matching with writer

However, in the present study different methods are used and it is about the stereotypes of dressing not the motives of clothes. Also in this study the researchers do not study small differences but they focus on different styles of clothes and the prejudices of people toward these different styles.

The hypothesis of the study is that people have some common stereotypes about the way people dress. To prove this claim, two methods are used. These methods are questionnaire and interview.

Subjects: 25 people who are the students of Bogazici University from different classes. (13 men, 12 women) Preparation: It is prepared according to data that is collected, especially from a thesis that is done by Ilhan Candas in 1985. It is generally adapted from the questionnaire that Ilhan Candas prepared for his research. Content: It contains twenty five questions whose answers were “Yes”, “I have no idea” or “No”. Its questions are about the stereotypes about people’s style of dress.

Subjects: 10 people who are the students of Bogazici University from different classes. (5 men, 5 women) Pictures: For the interview 6 photos are selected. Some are taken by the researchers and some are found from the internet resources. There are three girls and three boys who are dressed in three different styles (Formally, sporty and showy). (Appendix 2) Application: Researchers show each photo to the subjects and ask questions about the life-styles, personalities and socioeconomic status of these people. Then for each photo, the answers are noted and analyzed.

The questionnaire results are treated in different categories such as personality, sex, life-styles and fashion. First of all, 100% of subjects think that the way people dress can tell us a lot of things about them (Q1). Also generally people think that people have the tendency to conform to the majority (Q12, 68% yes, 16% no idea, 16% no) and want to look as much like everybody else as possible (Q2, 40% yes, 28% no idea, 32% no).

In addition, the subjects think that males have less interest in clothing and they care less for their physical appearance (Q7, 44% yes, 16% no idea, 40% no) and they refer the necktie as a sign of discipline, responsibility and traditionalism (Q3, 60% yes, 24% no idea, 16% no).

On the other hand, conforming to fashion is not limited with the females. If thought generally, people agree with that clothes are identified with some life-styles (Q18, 92% yes, 4% no idea, 4% no) and a part of good living is dressing-well (Q23, 44% yes, 24% no idea, 32% no). However, it is not thought that following the fashion is the sign of belonging to high income groups (Q13, 24% yes, 24% no idea, 52% no). It may be because of the opportunity to be able to find a product in very different prices from expensive to cheap.

In conclusion, people really have preferences in clothing and they are careful in different subjects such as fashion or hiding physical defects while choosing dresses. In addition, they really have some common stereotypes in the way they regard the way that other people dress. However, they think that there should be no rule in clothing (Q24, 40% yes, 24% no idea, 36% no). Results of the interview:

For the interview, 6 photos are used. These are sportive girl and boy, formal girl and boy, showy girl and boy. Questions about the life-styles, personalities and socioeconomic status of these people are asked to the subjects.

1. Sportive Girl (Picture 1): The findings show that the sportive girl in picture 1 is perceived as an 18-25 old, single, university student. Generally people identified the girl as a member of a middle or a high income group. It seems that posture of the girl also gives different messages to people such as calmness, dignity, soberness and coolness. Furthermore people pointed out that the girl does not follow fashion because of the way she dressed in a relaxed way. Also people generally thought that the girl lives with her family or in the dorm.

2. Sportive Boy (Picture 2): Sportive boy in picture2 is thought to be aged between 20 25 by the subjects. As people said about the sportive girl in picture 1, people generally described the boy as a university student. This person is generally perceived as a member of a high income group. Due to the clothes in fashion and brand named accessories on the boy in picture, people identified the person as a “clubber” who likes “the night life”, pubs and bars. Also from the disposition of the man, he was depicted as a creative job holder such as a musician, advertiser or a sportsman. Also people claimed that he is single and lives with his friends not with his family

Formal Girl (Picture 3): People generally identified the woman in picture 3 aged between 25 30. She is perceived as a bank official, a lawyer or a manager in a company. Most of the subjects described the woman as self-confident, successful, innovative and trustful. She was thought as a member of a high income group who has good relationships with the people around her.

Formal Boy (Picture 4): People generally thought that the man in picture4 is aged between 25 32. %50 of the subjects claimed that he is single and rest of them said he is married. It is generally perceived that he is a businessman who is the member of a high income group. Most of the subjects identified the man as serious, disciplined and choosy. Also people found him metro sexual who cares for himself and his appearance and who has good relationship with other people.

Showy Girl (Picture 5): The girl in picture 5 is generally thought to be aged between 18 25. People generally depicted her as a fashion model or a singer. Most of the subjects said that she is very energetic, self-confident but prodigal who does not know how to save money and she was found as fond of boys. Also she was perceived as a member of a low or a middle income group who wants to show off to people and who wants to seem different from whom she really is.

In this study, it is aimed to find out that there are certain stereotypes relating to physical appearance especially in clothing. All the subjects in the experiment have made nearly the same comments about the people in the pictures. For example, they all identified the formal boy (picture 4) as a serious, disciplined and choosy businessman or they identified the showy girl (picture 5) as an 18-25 year old fashion model or a singer. Even though, some people have made eccentric comments such as their horoscopes, eye color or hair color of the subjects in the pictures. This shows that all the clothes they wear are perceived nearly same by the subjects.

Furthermore, the questionnaire results also supported the hypothesis. Especially in question 1 which is that the way people dress can tell us a lot of things about them, all the subjects shared the same idea and agreed with the claim. In addition, in the questions 6, 10, 17 and 18 more than 90% of the subjects answered them as “yes”. On the other hand, for question 13 which is following the fashion is the sign of belonging to high-income groups, there is high rate for the answer “no”. As it is mentioned before the questionnaire results proved the idea that there are definite stereotypes of clothes.

To sum up, both the questionnaire results and interview results supported the hypothesis of the research. The research would lead people to conduct more studies about the stereotypes of accessories, beard, and moustache or hairstyle in the future. 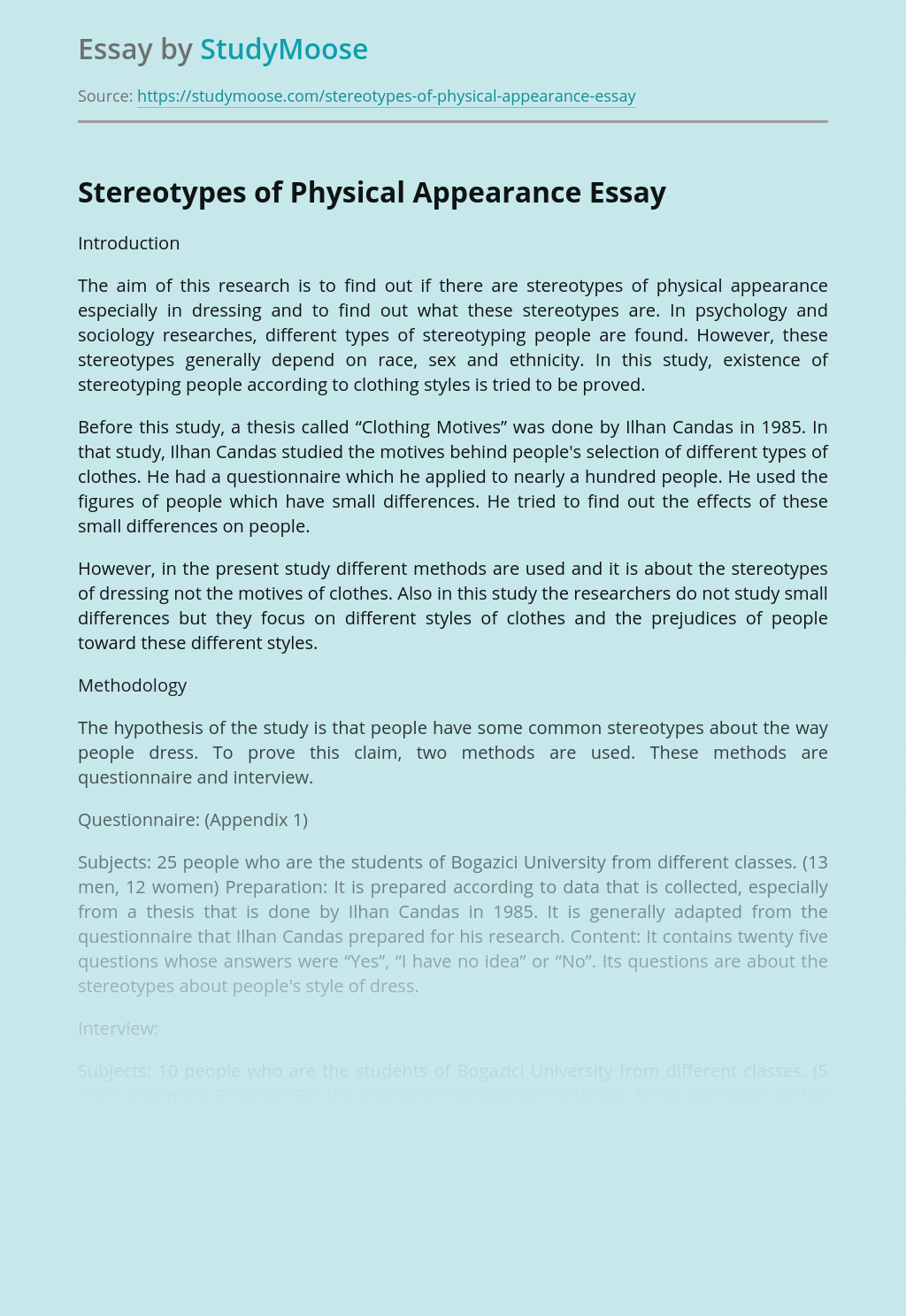 Turn in your highest-quality paper
Get a qualified writer to help you with
“ Stereotypes of Physical Appearance ”
Get high-quality paper
Helping students since 2015
Stay Safe, Stay Original