One of the best book by Rashmi Bansal narrating a story of 25 successful entrepreneurs from IIM- Ahmedabad. The book inspire young graduates to think beyond placements and salaries and to believe in their dreams. It is not the stereotype self help book. Some of the inspiring stories which inspires me most.

Sanjeev Bikchandani The reason for starting his company was independence. As an MBA from Ahmedabad he could have worked for any multinational companies, but he did not want to be prisoner of his visiting card and the logo on it.

He has seen many ups and down in his career but never lost his hope. It is the persistence that makes him successful and it inspire many of us. I like his advice that never start your business to make money. Love your work it gives meaning to the life. Then you will never loose your hope. There is no such thing as a failed entrepreneur, only when you quit.

Until then, you are simply not successful yet.

Shantanu Prakash is an optimist and innovator. When his father was retired and they wanted to settled in Delhi. He found that they do not have enough money to buy a DDA flat. Somewhere he knew that being a service holder he can not earn that much money, So he was sure that he will become an entrepreneur. He says that you don’t need money to start a businesses , if you have capital its great if you don’t it doesn’t matter, you cant start the business.

He started a company Educomp it is into digital content and E-learning. Starting from scratch, now his company capitalization is Rs 7000 crore.

Vinayak Chatterjee was not sure what he wanted to do. He became a sales manager in Pond’s .The company treated him well and confirmed him area sales manager in 6 months. But he was not satisfied with his job as it was not as exciting as he wanted. He resigned Ponds and joined Apollo tyres which was badly in debt. He worked hard to streamline the company. But again he was caught in monotony and the challenges were missing in his job so he quite the job, this time he decided to do something new. With the team of his friends and his wife, he started a market research firm. He also made mistakes in his career but was able to come out from this with the rapport that he had made in industry. He did what his inner voice said. That’s what inspired me.

Deep Kalra at first joined ABN Amro, after that he realized not to work for bank. That point of time he thought to start his own business but that was only thought. He joined AMF bowling and after GE -the consumer finance business around the same time he came across with Ajit Balakrishnan of rediffCom and sunil bikhchandani of Naukri.Com. That’s when he realized internet was going to change lives and he wanted to do his own thing. Now his thought took a plunge and started his own business. The first Venture capital funding came from Neeraj Bhargava, the managing partner of e-ventures. He inadvertently gave away 70% of his company for funding. However he bought back the company during distress sale by e Ventures and that’s when he really became an entrepreneur. I learn from his experience that we should choose our field and partner carefully . Hire best employees, never focus on exit, concentrate on building a solid business.

Narendra Murkumbi: He shut down his first company because a Rs 5 crore turnover was not big enough. Today his second business Shre Renuka Sugar is Rs 1000 Crore company. One of the interesting success story which tells you to Think BIG. He passed out from IIM-A in 1994 and started a traditional business of Sugar mill. People felt that it is old business but he proved them wrong. There is no business which is old only the method of doing it is old. He worked wisely like there were some sick co-operatives , he approached co-operative run mills which were in distress and leased them. There are many things to learn from him and the way he made all this happen. I can say Innovation is the key to his success. In his point of view Core competence, doing one thing world class is no longer holds in India, look for new opportunities and scale up those opportunities.

R Subramanian: He quit his job at Citibank 15 days after joining. He wanted to do something else and became India’s largest grocery chain store. But at first he started Assets securitisation systems in India and made lots of money. In 1996 his company was having enough money and staff but nothing much to do, So Mr Subramanian was planning to do something else to use this money , They conducted extensive research on customer behavior and found that offering the branded goods at a lower price than their competitors could make them stand in the competitive retail industry. They decided to start Subhiksha which was created with a promise of best value. The concept is successful because the profit margin is very less and it is giving best value to consumer. That is why with in a span of 10 years Subhiksha came over 1000 stores all over India. The greatest advise he gives, work in a real life companies , the smaller the better,don’t join big companies, join smaller companies because you will get far more exposure.

Mastek: Ashank Desai set up Mastek along with couple of friends. The group was formed on the IIMA campus- Ashank desai, Ketan Mehta , Sunder and Wasan. The company started operations in a two-bedroom apartment in Mumbai suburb, which was also the home of Ketan Mehta.. They started business with a public phone. They did not have a computer for first five years. The partners took Rs 1000 to 2000 as salary after meeting all expenses. But they never thought of closing down getting back to the job. An exibition by CSI proved to be turning point. The PC had just been launched and Mastek was the only software company to advertise there. They bagged order from Big companies like Citibank and HUL. And this struggle phase lasted 6 years. But the conviction and vision made the company successful.

The next phase one where company focused on exports. One of the partners settled in US to make this happen. Powered by strategy , systems and new markets to conquer. By the year 2000, Mastek achieved turnover of Rs 250 crore and consistently ranked among the top 10-15 in the software industries. As on F.Y 2008-09 company has a revenue of $200 million. Advice from from the mentors: You require a team feels trust for each other. And which is willing to designate one of them as a leader, Not based on shareholding alone but respect. Get 4-5 years of experience. Get bit of a feel and financial stability . Don’t just think about it, don’t just wish for it, jump into it and do it, if you are really serious. Remember that if the start up fails, it is your idea that failed , not you. Make plans but remain open to all possibilities. Retain work life balance.

A inspiring book. All stories are very concise, interesting and to the point manner. I found some common things to everyone was their passion, self-belief and a never die confidence. The author has done a brilliant job of researching and telling the stories in a interesting manner. At the end of every stories you will find advice which is a precious thing. I am really inspired by this book which gives me a feeling and more than that it has given me courage to think beyond a good comfortable job. Sooner or later I will start my own businesses, Thanks to Rashmi Bansal for writing a brilliant book which has changed my thinking. 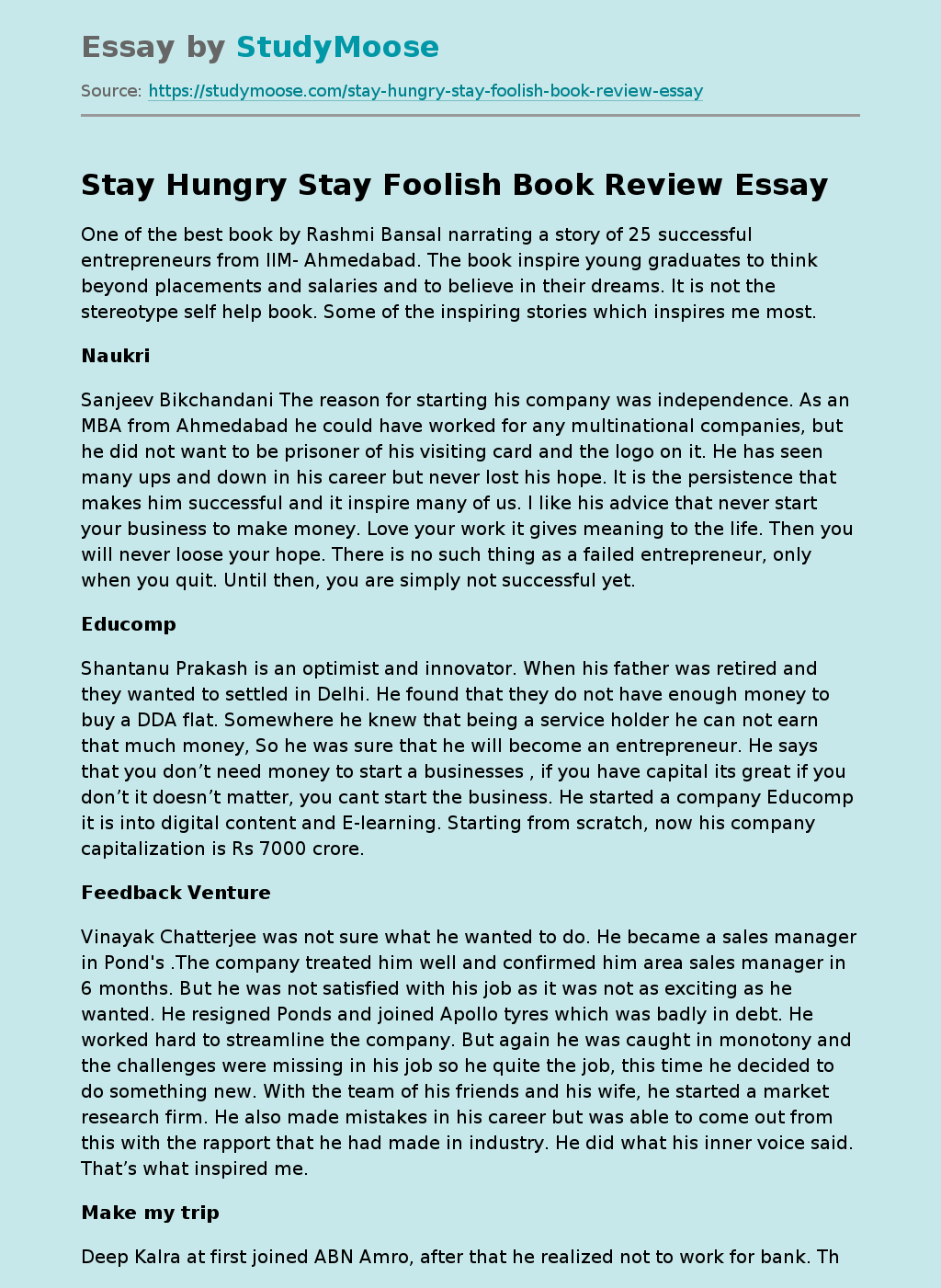