Status of Women in India

in india“When one boy is educated, one person will be wise. When one girl is educated entire family will be wise.” This is famous quote by girl education pioneer Mahatma Phule. This underlines the importance women in society. From the time of independence our constitution concentrated to give enough right for women. But the problem is that women are facing many problems in this modern age of gender equality. The structure of Indian society is different and unique than any other.

Don't use plagiarized sources. Get your custom essay on
“ Status of Women in India ”
Get custom paper
NEW! smart matching with writer

Indian society believes in epics like Ramayana and Mahabharata more than anything else. Society wants that a woman should be like Sita the ideal Indian woman, who surrendered all her desires and followed Rama to the forest. Girls are brought up to follow the footsteps of Sita. In today’s modern world this expectation continues.

A woman should go for work, earn money and must do house hold works also. Society expects that a woman should be like superwoman who can do everything.

This is totally injustice for women. From the time of independence we as nation tried to create a society where women have equal rights as men. Our constitution, Government worked sincerely in that way. The Laws like The Hindu Marriage act (1955), The Hindu Succession Act (1956), The Dowry Prohibition Act (1961), The Maternity Benefit Act (1961), The Equal Remuneration Act (1976), The Indecent Representation of Women (Prohibition) act (1986) have paved the way for bringing about major positive changes in the lives of women. Despite of such constitutional weapons women are facing lot of problems like

Feticide is the largest problem for today’s society.

As technology developed, people are using it to kill girl fetus. Feticide is today’s biggest problem Indian society. Till 2001, there are only 933 female births per 1000 male birth. This is dangerous situation for the balance of society. In spite of act against girl child abortion people are finding escape for abortion. As of March 2001, the female population stands at 495.4 million out of total 1,028 million Indian populations. Thus, in the present population of 1.03 billion, there ought to be 528 million women. Instead, estimates show only 496 million women in the population today.

Harassment is the common in country like India. Probably it is for the reason of Dowry. Police records for the country as a whole show that a woman is molested every 26 minutes. A rape occurs every 34 minutes. Every 42 minutes, an incident of sexual harassment takes place. A woman is kidnapped every 43 minutes. And every 93 minutes, a woman is killed. When a woman is harassed she doesn’t come for the complaint against it due to fear. She fears the disgrace in society and shuts her mouth. We have to provide fear free environment, so that a woman come for complaint and demand justice.

As mother, family care taker a woman always ignores her own health and concentrates on the family health. This is age long habit of traditional Indian woman. As individual she must break this. Government as well as social wale fare communities must arrange proper health education and cheap health facilities for woman.

In 2001 the total literacy rate in India is 65.8. The woman literacy rate is 54.16 while male literacy rate is 75% this shows that woman literacy rate is low, In spite of many schemes for girl education. We have to make minds of girl child parent to send them school.These are the random problems and many are under curtains. The one perfect remedy is the proper implementation of laws and schemes for woman. Though significant improvements are have taken in the position of woman in the 50 years following independence, women continue to suffer from the problems like violence, illiteracy and ill health Together we have to work in the way of gender equality, woman wale fare so that a woman can live proudly as human being and not as servant nor as goddess.

Status of Women in India. (2017, Mar 06). Retrieved from http://studymoose.com/status-of-women-in-india-essay 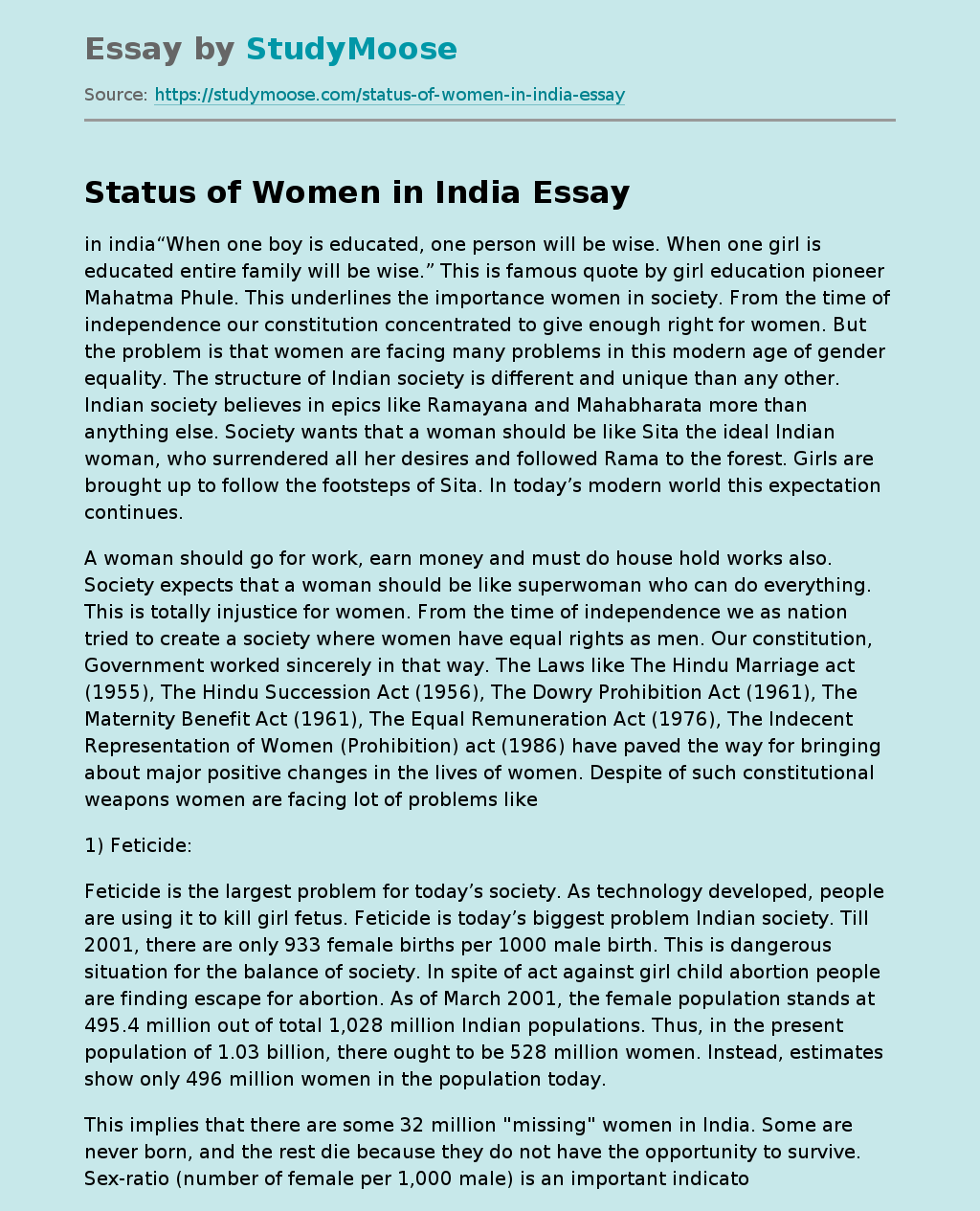