Posture: Stark appealed upon conclusion of a criminal jury and bench trial to Washington Appellate court from in which he was found guilty of three counts of second-degree assault as a result of exposing three female partners to HIV virus on over 6 occasions where he used a condom some of the time and after vaginal intercourse ejaculated outside the vagina on one of his victims.

Upon conclusion of jury trial Stark was overly sentenced for one count of second-degree assault of 120 months or 10 years.

Don't use plagiarized sources. Get your custom essay on
“ State v. Stark ”
Get custom paper
NEW! smart matching with writer

Stark was also found guilty in a bench trial by judge two counts of second-degree assault and judge imposed upon Stark two sentences composed of 43 months in which he was to serve sentences on a concurrent basis with the imposition of consecutive sentence of ten years as to the first charge.

Stark appealed sentence for judicial review of his sentence as Washington Statute proscribes under RCW 9A.36.021 Assault in the second degree is punishable with 3 12 months if that person has no prior history in which defendant can face fine of up to ,000.

Facts: Three medical tests performed on Stark; one initial and two consecutive in which resulted in and confirmed a positive diagnosis for the HIV virus.

Stark was then advised through county health officials approximately five times counseling that to engage in sexual activity would expose partners to
HIV virus of which there is no cure.

Health officials then gained knowledge that indicated Stark continued to engage in sexual activity and under Washington statute RCW 18.

235.150 applied for Cease and Desist notice directed at Stark.

Stark was then advised by police who presented to him cease and desist order to stop engaging in sexual intercourse with the knowledge of HIV-positive diagnosis and refused to comply.

Proof of Starks refusal to follow cease and desist came after his arrest and testimony from the victims and a neighbor who asserted that when talking to Stark he acknowledged his actions but also that he refused to follow cease and desist order and displayed callous attitude of his medical condition. In that his view came to light that ?veryone was going to die anyway His view and his actions reinforced his belief that that he was merely facilitating the inevitable death process.

Issue(s): Is defendant stark entitled to constitutional protection and a right of privacy concerning HIV-positive diagnosis at a public criminal trial.

Was the element of intent formed by Stark by not complying with judicial order to cease and desist sexual activity whereby causing three victims harm that would potentially cause death.

Did the trial court err when Judge used discretion in the imposition of excessive sentence upon Stark and not imposing statutory time frames for the punishment of second-degree assault.

Trial court did not err or violate the privacy act when confidential information about Stark’s HIV diagnosis was presented to the jury by the prosecutor to obtain a guilty verdict.

Washington Appellate Court accomplished or decided two issues separately. First the court upheld all convictions of second-degree assault and found no basis in law for there to be a re-trial but did remand back to the lower court and ordered there to be re-sentencing according to Washington Statute and punishment according to that statute removing judicial discretion.

Rationale: The courts reasoning in this case is two-fold: First it examines what is an accepted deviance by a judge using discretion to sentence a defendant and questioned whether the judge in excersising discretion so clearly go outside the scope of discretion to overly charge Stark. Two: Did judge in using discretion so unfairly sentence Stark excessively that the sentence violates state statutory minimum and maximum sentences imposed for second-degree assault. The court found that while Judges do have discretion and can exercise that discretion as that judge sees fit it is in no way a permission to overly sentence a defendant outside the acceptable range of punishment.

While the case is pre Health Insurance Portability and Accountability Act of 1996 also known as HIPPA, the case examines the right of a defendant to privacy when diagnosed with HIV and the right of society to be privileged to that information during a criminal trial.

Thoughts: This case is a good example of judicial review of which a higher court can review the findings of a lower court and either agree or disagree with the lower courts decision. Such as under Article III of the United States Constitution in which the land mark case of Marbury v. Madison, 5 U.S. 137 (1803) in which judicial review was established. 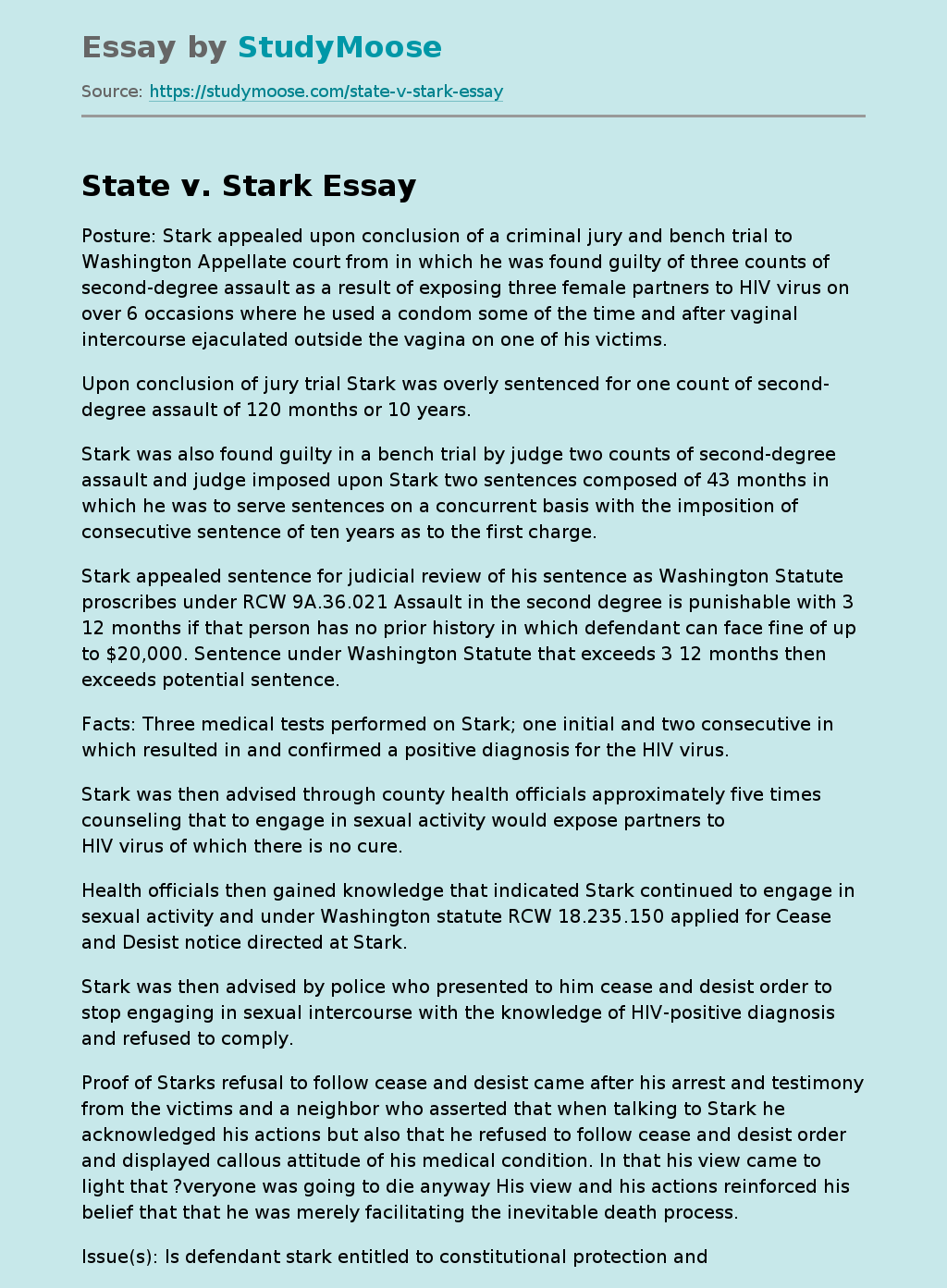