State under a Machiavellian Ruler vs. Utopian State

A Machiavellian society is ruled by a princedom in which peasants worked most of the occupations. Nobles did not perform any physical labor. And the military is strong and follows the prince. In a Utopian society there is a community of senior phylarchs who discuss state issues. Everyone spends time in the farmlands for two year periods. The Utopians despise war and at all costs do not get involved in war.

In Machiavellian society a prince rules over the princedom. The prince has several ministers help him to decide on issues of state.

Don't use plagiarized sources. Get your custom essay on
“ State under a Machiavellian Ruler vs. Utopian State ”
Get custom paper
NEW! smart matching with writer

The prince has final say in all matters and does not need the approval of the ministers. In Utopian society each household is divided into thirty members with an administrator called a phylarch. Every ten phylarchs answer to a senior phylarch. The senior phylarch all go to meetings under a chief executive to discuss the state issues.

Machiavellian princedoms had all peasants working in the farmlands and did not punish the lazy workers.

Machiavellian princedoms had mighty military forces that usually used brute force and size to annihilate enemies. The military would draft peasants if needing more troops. They would also destroy enemies’ lands any time they invaded. The Utopian state despises war and does everything in their power to avoid war. But when given no other choice the Utopians are a mighty foe to be reckoned with. They hire mercenaries to fight for them under the control of Utopian generals. The Utopians use cunning when at war instead of brute strength. Many consider their tactics to be dishonorable. They will post assassination posters and rewards for betraying the leaders all over the enemy’s country. They never force Utopians to join the army unless they volunteer or are invaded.

A state under Machiavellian rule has a prince in charge of the state. The peasants work in the fields and the nobles perform meaningless tasks. Their army is strong and massive in size. Always ready to attack and defend against any threat. The Utopian state is not ruled by a prince but controlled by a committee of senior phylarchs. The Utopians all work in the fields and are all efficient in what they do. The Utopians despise war but are not to be underestimated. Both states are powerful societies that are very different in what they do.

State under a Machiavellian Ruler vs. Utopian State. (2016, Jun 19). Retrieved from https://studymoose.com/state-under-a-machiavellian-ruler-vs-utopian-state-essay 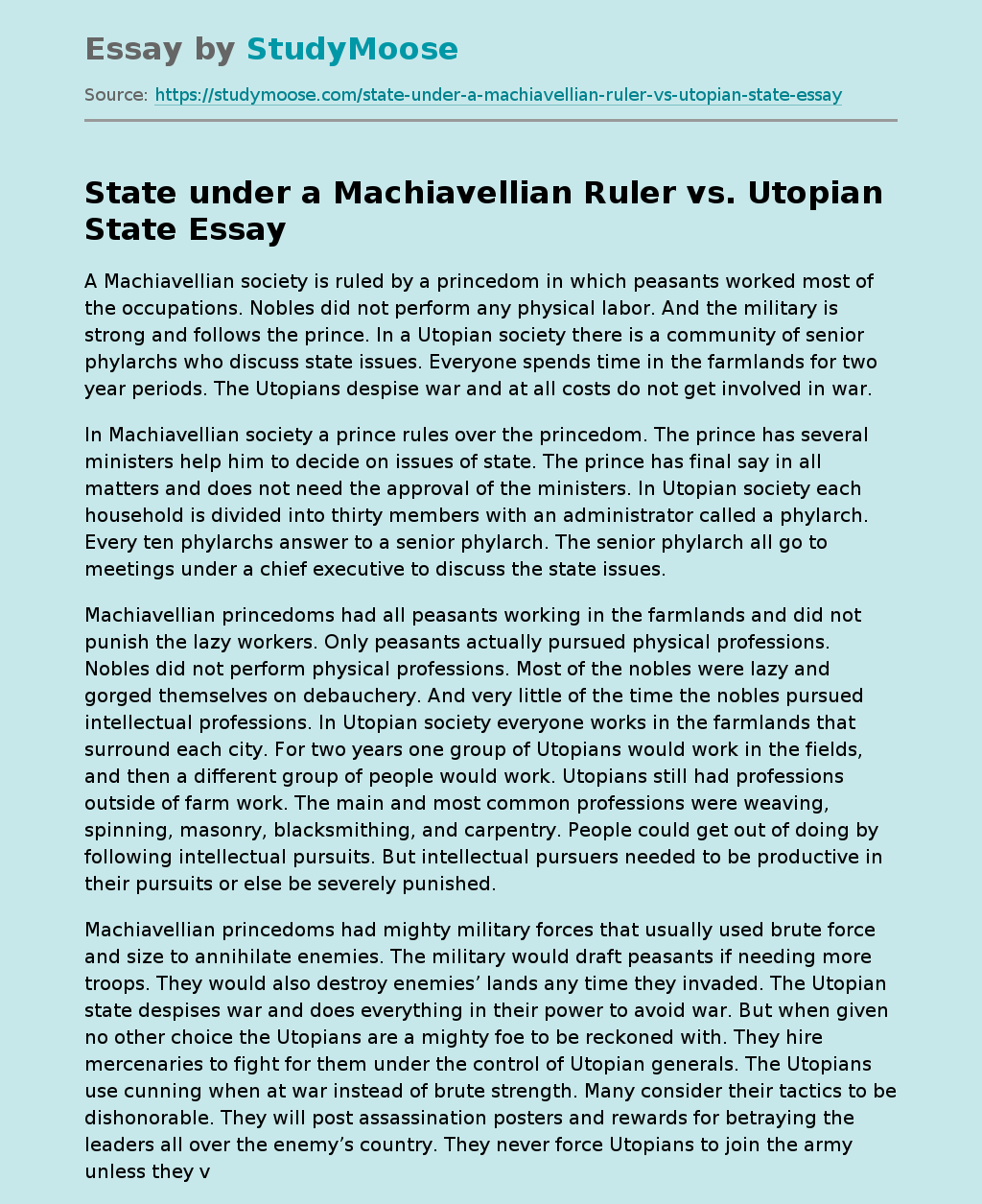