This paper will focus on the State and Federal marijuana legalization from three scenarios and analyze the retributive, commutative, and distributive justice of these three scenarios complex situations. First scenario will be a “recreational pot smoker, who lives in a state that recently legalized growing, possessing, selling, and distributing, through state-regulated dispensaries, limited amounts of marijuana for medical use”(Ashford University online school website,2013). Second scenario “a parent living in the same state, concerned that her 12-year-old will be exposed to new and significant risks of addition of pot that will be readily available in their community” (Ashford University online school website, 2013).

Don't use plagiarized sources. Get your custom essay on
“ State and Federal Marijuana Legalization ”
Get custom paper
NEW! smart matching with writer

Third scenario is the “Chief of Police of the city where these people live, who has urged the City Council to enact new local zoning and other regulations that will make it virtually impossible for medical marijuana dispensaries to operate in the city” (Ashford University online school website, 2013). First, let us look at what the definition are for retributive, commutative, and distributive justice.

The first scenario of a “recreational pot smoker who lives in a state that recently legalized growing, possessing, selling, and distributing amounts of marijuana for medical use” (Ashford University online school website, 2013). Retributive justice is seen in this scenario, as the pot smoker will unjustly misuse the law because the pot smoker uses it for recreational use and not for medical purposes.

Retributive justice is seen by having a “showdown between state and federal authorities that will not target individual uses of the drug, instead focusing in new regulations that will make marijuana sites permissible a violation of federal law” (Guarino, 2012). Commutative justice seen in this scenario is the pot smoker uses it for recreational use will see this as an ok to use the recreational marijuana because there is now a binding contract that states marijuana is legal. However, this law passed by voters in some states “could set the states up for a showdown with the federal government, removes criminal sanctions for anyone 21 or older possessing 1 ounce (28.5 grams) or less of pot for personal use” (Myers, 2012). Distributive justice seen in this scenario is the pot smoker uses marijuana sees it, as goods (marijuana) were made available.

“In Colorado the distributive justice can be viewed to a recreational pot smoker as marijuana, (goods) of small amount being sold is legal to have in one’s possession” (Clement, Craighill, 2012). The second scenario of “a parent living in the state, concerned that her 12-year-old will be exposed to new and significant risk of addition to pot that will be readily available in their community” (Ashford University online school website, 2013). Retributive justice in this scenario will make life a little easier for the parent if ones selling the marijuana approach her child. Retributive justice will promptly deal with people who acted unjustly regardless if at State or Federal level. Commutative justice in this scenario gives the parent some guidelines and laws to protect her child cause in place there is laws written with legal binding contract to protect her child if child encounters an unwanted pot smoker trying to force pot on this 12-year-old. In place are laws of binding contracts to protect ones such as the 12 year old. Distributive justice in this scenario even though the goods (marijuana) is made available parents need to talk to his or her children about “do not use drugs, these conversations about drugs are even more important to have now, says Dr. Leslie Walker” (Parasher. 2012).

The third scenario, the “Chief of Police of the city where these people live, who has urged the City Council to enact new local zoning and other regulation that will make it virtually impossible for medical marijuana dispensaries to operate in the city uses the retributive justice cause the Chief of Police is trying to keep it where that when people have done wrong that he or she will suffer the consequences” (Ashford University online school website, 2013). However, on the state side of the city that has passed the legalization of pot, it is legal but the Chief wants to uphold the federal side to what is still illegal. Commutative justice in this scenario that even though the state has a fair exchange with a contract the Chief wants to uphold the federal laws of the contract too that states it is illegal. With two binding contracts the Chief is in a win-lose spot. The Chief of Police can win in his favor from the federal side and lose on the state side because majority of the votes from the society legalized pot. Distributive justice in this scenario is where the Chief of Police is trying to make the dispensaries non-existence with upholding the federal side saying it is illegal while the state says they have the right to put up dispensaries.

In exploring the way that moral character may inform the actions or choices of each of these central actors is with the recreational pot smoker he would fall under the moral character of “regularianism that holds that an act is just and therefore morally good, if it obeys a rule and unjust, and therefore morally bad if it violates a rule” (Dreisbach, 2013). In the scenario of the parent the moral character would be “objectivism, the views that moral value brings to the object being justified” (Dreisbach, 2013) as is with the parent because morality is a personal issue. In the scenario of the Chief of Police would be “subjective meaning I do not approve” (Dreisbach, 2013). In conclusion, in how to achieve the most just resolution to issues involving the availability of marijuana in American society is not an easy question to answer especially for someone who does not support the legalizing of pot in any state. However, this paper deals with state and federal legalizing so in respect to trying to come to some kind of terms between the state and federal each ones needs to come together as one and make the laws on legalizing of marijuana available but on more choices on how and some way to make it legal for non-supporters and supporter’s. 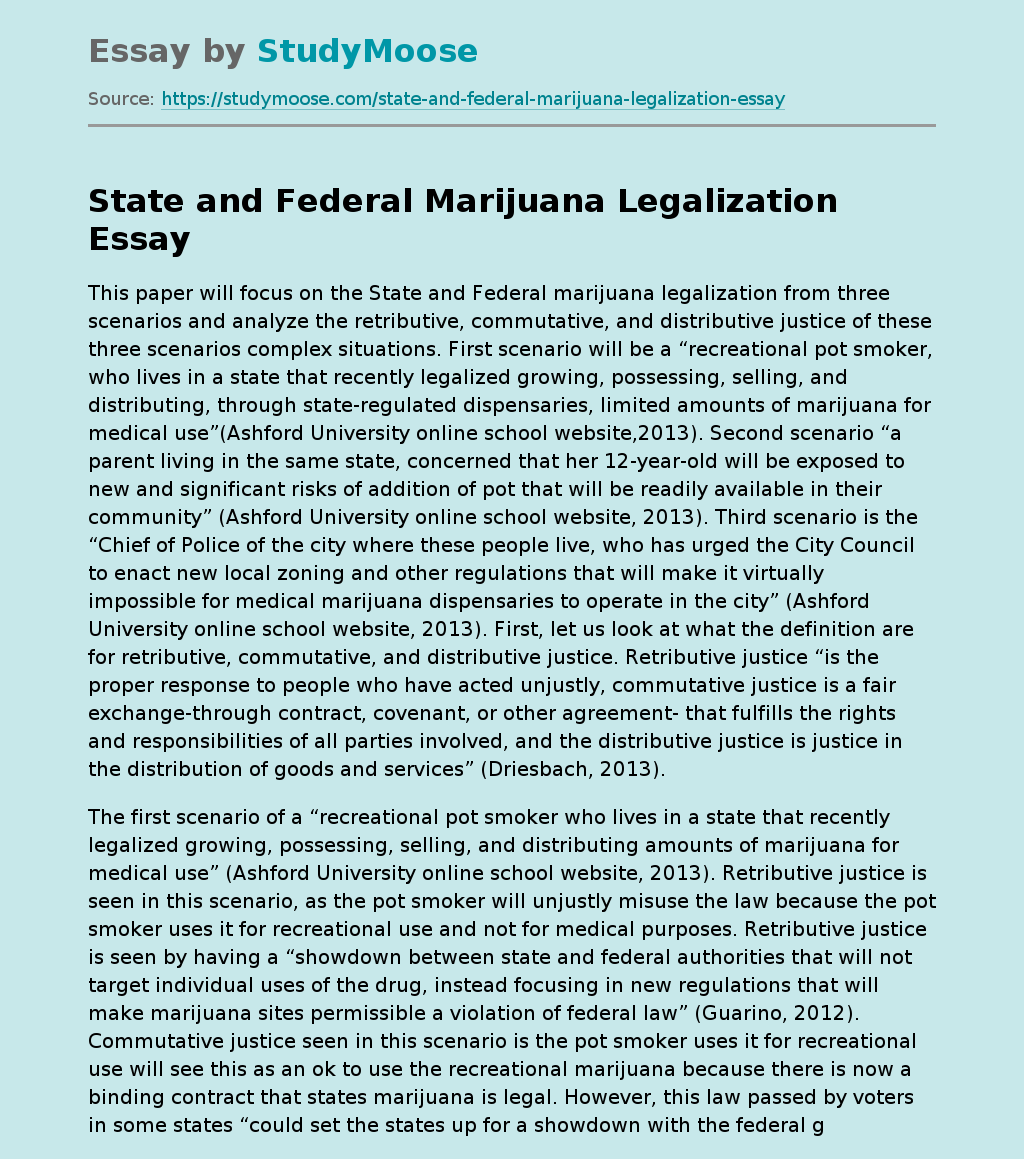