Because of their substantial growth over two decades, they have spent a considerable amount of time defending their image.

Don't use plagiarized sources.
Get Your Custom Essay on Starbucks Mission: Social Responsibility and Brand Strength Just from $13,9/Page

Their “clustering” strategy put many small coffee shops out of business and many consumers began to wonder if there really was a need for two Starbucks right across the street from each other. During the 2008-2009 recession, they decided to refocus their strategy. They closed several hundred underperforming locations in response to the economic downturn. They also introduced “breakfast pairings”, a Starbucks-styled value meal, for an affordable price. They even introduced an instant coffee consumers can brew at home.

Being socially responsible also has its financial and nonfinancial rewards. Schultz has also been a firm believer that ethical companies do better in the long run. Because of Starbucks’ dedication to their employees and their suppliers, Starbucks had earned their loyalty. Their employees are proud to work for the company and that pride reflects in low employee turnover. When consumers see happy, long-term employees, it reinforces a reason for them to return, along with the inviting atmosphere and great coffee.

All of these would be considered nonfinancial rewards. As consumers see Starbucks continually practicing social responsibility and following the guidelines of their mission statement, they will continue as a loyal customer and promote Starbucks to their friends, family, and coworkers. Consumers are more apt to invest their hard earn money in a company that puts people first and treats them as humans. Achieving employee loyalty also has its financial rewards. It’s extremely costly to hire new staff. The money saved by keeping the staff you currently have reflects in the company’s profits.

2.Is Starbucks unique in being able to provide a high level of benefits to its employees? I believe so. I worked at Wal-Mart about eight or nine years ago. For a company that size and worth millions, one would think they offered a decent health insurance plan. They didn’t. Also, their health plan was only offered to those working 32 hours or more per week. For Starbucks to offer part time employees stock options and health insurance complete with dental and vision is fantastic. It’s extremely rare for companies to offer part time employees benefits of any kind except those which are mandatory. I would consider working at Starbucks. Even though I’m not a coffee drinker, I would learn to drink something they offered.

3.Do you think that Starbucks has grown rapidly because of its ethical and socially responsible activities or because it provides products and an environment that customers want? I believe their growth is the result of both practices. First Starbucks offers a product the consumers want, and they offer an atmosphere unlike any other. As a result of the recession, they looked at more affordable offerings to keep the customer base they already have. I feel this is one reason the company has continued to being profitable during this last recession. If I was a Starbucks customer, I would still continue to buy my drink of choice even though they are slightly higher priced.

I would buy less often. Next, having a sense of acting in a socially and ethically responsible manner has also assisted in their growth. Their decision to close locations instead of continuing to open more during the recession definitely was an act of being socially responsible. For those that criticized Starbucks for having locations across the street from one another, this could have changed their image of Starbucks to a more positive one. Starbucks donates money to literacy groups to better educate children in that community. They guarantee loans and pay premium prices so farmers can financial support their families. All of these practices instill a positive image to the consumers. Other businesses are more willing to invest in companies that give back to the community.

4.In what other ways does this case relate to the concepts that we have learned in the chapters so far? Since we are only on chapter 1, this is somewhat hard to answer. The first part of the chapter reviews the history of business ethics and how it has evolved over the past several decades. Next, it reviews the benefits of being ethical and these were covered in the questions above. The chapter finishes with an overall summary and a preview of the chapters to come. I feel the main points of this chapter have been covered in the questions above. Please advise if there is something specific you were looking for as an answer. 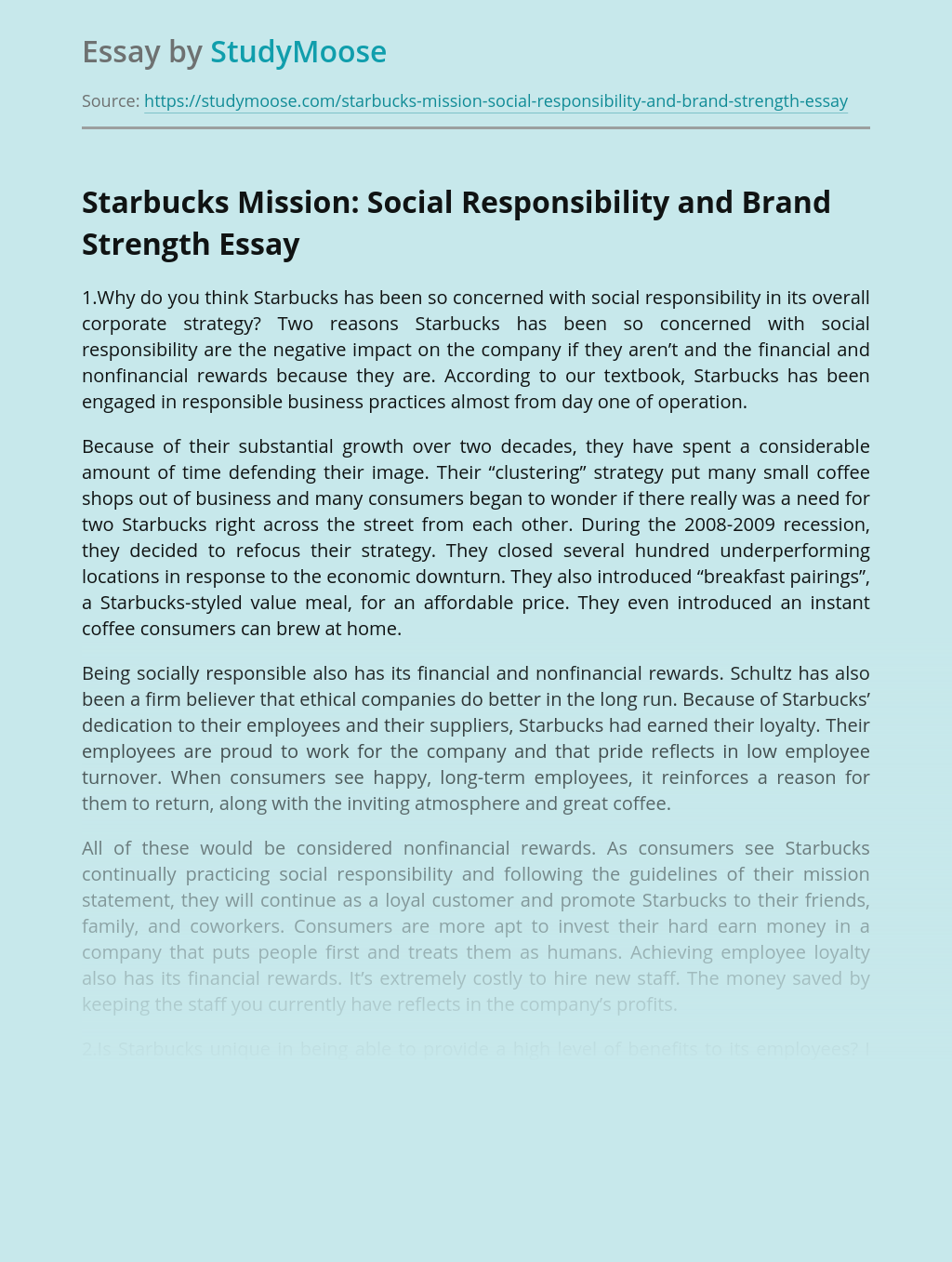 Kate Chopin was an American author of short stories and novels. Considered as one of the earliest feminist authors of the 20th century, she was one of the most-celebrated female writers of her time. She wrote several short stories including The Story of an Hour (1894), Euphrase (1850), Mrs. Mobry’s Reason (1891), A Shameful Affair...

In this unit I have learnt about how to play netball and learn about all of its different positions in the game. The Defensive positions are Goal keeper (GK), Goal Defence (GD) and Wing Defence (WD). The attacking positions are Wing Attack (WA), Goal Attack (GA), Goal Shooter (GS) and then there is centre (C)....

This usual refers to marine science or oceanology which usually reveals the study of Earth’s Oceans and Seas. It’s a dynamic topic since it usually corers a wide range of topics such as ecosystem, organisms in marine life, currents, waves and other geophysical fluids dynamics. It also called geology, plate tectonics and fluxes which are...