This represented a change from 10 years earlier, when about half of store revenues had come from sales of whole-bean coffees. Company encouraged promotions within its own ranks. About 70% of the company’s store managers were ex-baristas, and about 60% of its district managers were ex-store managers

Not easy to strike up a conversation with customer as before because today every customers orders a handcrafted beverage Coffee consumption was on rise in the United States. More than 109 million populations drank coffee every day, and an additional 52 million drank it on occasion.

Consumption of specialty coffee was rising and it was estimated that about one-third coffee will be consumed outside of the home New product development process took 12-18 month cycle and its success mainly dependent on partner acceptance Starbucks’ customer base was evolving. Newer customers tended to be younger, less well-educated and in the lower income bracket.

Starbucks owned close to one-third of America’s coffee bars, more than its next five biggest competitors combined Serving 20 million unique customers in well over 5000 stores around the globe and was opening on average 3 stores a day Starbucks operated over 300 company owned international stores and about 900 licensed stores across globe Marketing consisted primarily of point-of-sale materials and local-store marketing(Most fast-food chains had marketing budgets in the 3%-6% range) 11 consecutive years of 5% or higher comparable store sales growth Excellent product(coffee), awesome service and lounging environments were the three components of branding strategy Starbucks controlled as much of the supply chain as possible Lowest employee turnover rate(70%) compared to industry average of 300% Partner satisfaction rate consistently hovered in the range of 80% to 90% range

Some of them offered satellite televisions, internet connected computers. Donut and Bagel chains like Dunkin Donuts with 3700 stores also competed with Starbucks. It has started offering flavored coffee and non-coffee alternatives

Starbucks took care of its employees through Health Insurance and Stock options.

Starbucks sales were increasing at a CAGR of 40%
Strengths

Starbucks had company operated stores located in high-traffic, high-visibility settings. The employee turnover rate was lowest at Starbucks with only 70% turnover when compared to the industry average of 300%

Strong financial foundations with since the company had gone public Weaknesses

Customer satisfaction is decreasing and Starbucks is losing the customer loyalty.

Self-cannibalization of at least one third of Starbucks stores everyday

The perception of Starbucks Brand Image in the Recent Findings of people’s experiences: Starbucks cares primarily about making money – from 54% to 61%. Starbucks cares about building more stores – from 48% to 55% Starbucks strategy for expanding in retail business was to open stores in new markets while geographically clustering stores in existing markets. There is service gap between Starbucks scores on key attributes and customer expectation.

More than 109 million people now drank coffee every day and an additional 52 million drank it on occasion. Company was only in 150 of the roughly 300 metropolitan statistical areas in the nation. In the southeast there was only one store for every 110000 people compared with one store for every 2000 people in the pacific northwest.

Coffee consumption was on the rise in United States.
Company has the opportunity to cover 150 metropolitan areas in the nation. It could open new stores in existing markets where saturation level was not high.

Increasing consumer perception that Starbucks only cared about the money. New customer perceived that Starbucks is not so high quality brand. Very little image differentiation between itself and smaller coffee chains.

Customer satisfaction is decreasing and Starbucks is losing the customer loyalty. Data revealed that they are not meeting customers’ expectation in the area of customer satisfaction Complexity of job increased because of customized demand, which slow down the service for everyone else Starbucks lacked strategic marketing group. Organizational structure meant that market- and customer- related trends could sometimes be overlooked. Data were not used judiciously to take marketing decisions.

Newer evolving customers visited the stores less frequently than the established one and their perceptions regarding high-quality brand, tastes, quality were also on down swing Possible alternatives:

1. Invest additional 20 hours of labor, per week, per store, at a cost of an extra $40 million per year to improve speed-of-service and thereby increase customer satisfaction. 2. Focus on Product innovation & Retail expansion as growth strategy.

Proposition and our stand

Starbucks should make the $40 M investment to improve the speed of service which will increase the customer satisfaction. This will increase customer loyalty barring which there is a possibility that the ‘highly satisfied’ and ‘satisfied’ customers might become ‘Unsatisfied’ customer. They should create a strategic marketing group that would collaborate the efforts of market research group, category group and marketing group. They should improve the metrics to measure the service performance. 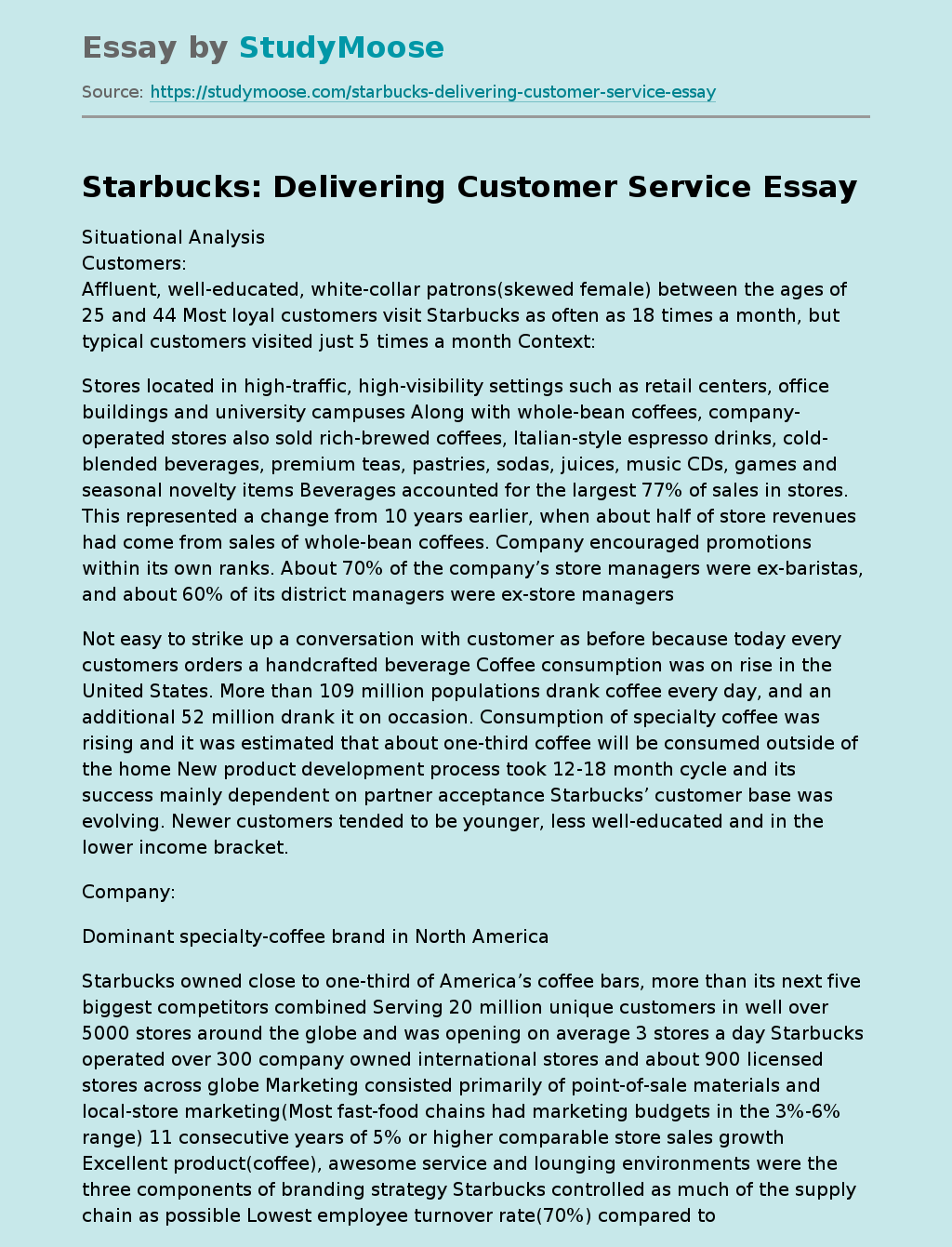