Standardized Testing: A Blessing and a Curse

As of late, parents and university officials have grown increasingly concerned over what replacing the provincial exams for grade 11 and 12 students might implicate. Here, parents and University officials claim the provincial exams, alongside being a tool that prepares students for post-secondary, are a primary medium that is used in assessing applicants into the very same post-secondary institutions. The ministry of education, however, seems to feel that the standardized tests seem only to have the best interest of students aiming at post-secondary in mind.

Don't use plagiarized sources. Get your custom essay on
“ Standardized Testing: A Blessing and a Curse ”
Get custom paper
NEW! smart matching with writer

Accordingly, they hope eliminating provincial exams will result in an increase in creativity and will cater to a more diverse body of students. As such, the current paper, considering the issue mentioned above, will provide a brief history of standardized testing before moving onto examining both the pros and cons of standardized testing. The paper will then examine alternative forms of assessment, including some that fall in line with the multiple intelligences theory.

According to Haney (1981), the use of testing in America began with Lewis Terman’s revision of the Binet scale in 1916.

In 1904, following the implementation of compulsory education, Paris had noticed that performance among children was spread rather broadly, with some lagging far behind their peers (Goodwin, 2015, pg. 213). To address this problem, they had commissioned Alfred Binet who, in 1905, went on to publish a test. Note, that they did not title this test an intelligence test, but rather a test that merely identified two groups of students, “one normal and one impaired” (Goodwin, 2015, pg. 214). The test then, after being introduced to America, went through its first real standardization.

Here, after multiple tests and revisions, Lewis M. Terman ascertained the level at which individuals in each age group should perform, and by extension, introduced the concept of IQ (intelligence quotient) (Goodwin, 2015, pg. 222). This standardization and the later use of the test on military personnel yielded some concerning results; the intelligence of the population appeared to be no higher than the mental age of thirteen or fourteen. Where some blamed the test, others blamed the immigrant populations, highlighting yet another problem with society. In the 1930s education systems seemed to be shifting radically towards standardized testing and its normalization (Henry,1981). As best reflected by the literature of its times, there appeared to be a test for everything, “ranging from art to woodwork” (Henry, 1981, pg. 1023). One researcher, Oscar Buros, started collecting intelligence tests. Here, what had started off a 44-page test bibliography became a 400-page “Mental Measurement Yearbook” (Henry, 1981, pg. 1023).

Where standardized testing had initially started off with the end goal of identifying and helping struggling students, it has shifted radically to become a primary tool of assessment. In light of the former, it is important to examine how a system centering around standardized assessment is beneficial to both students and education administration. The first merit of assessment centered education appears to revolve around educators, for it is highlighted that standardized assessments make clear what content knowledge teachers should have within their discipline (Phelps,2005). Second, standardized tests seem to be giving rise to accommodation in educational settings. Specifically, testing seems to be bringing increased attention towards children with disabilities; the need to succeed in high stakes testing is forcing teachers to become more sensitive and responsive to the needs of students (Phelps,2005). Third, the more test literate educators are becoming, the more evaluative and critical they are becoming of their classroom activities. For example, Goldberg & Roswell (19991) have discovered that teachers who participated in training on how to score and prepare for a local test, had become more reflective teachers (Goldberg & Roswell, 19991 as cited in Phelps, 2005). Fourth, standardized testing seems to have resulted in an increase in educational options, for student and school performance seems to mitigate decisions on what kind of school to join (private, public or homeschool), and what kinds of programs to join (honors, AP, or IB) (Phelps, 2005).

Sadly, where it is clear that standardized tests have many merits, they seem to focus predominantly on educational officials and not the students. In fact, it appears as if there is quite a bit of collateral damage that accompanies student achievement on state-enforced examination (William, 2010). The first problem with standardized tests is false assumptions. The biggest mistake that test makers seem to make is assuming that knowledge and abilities can be isolated to fit a linear scale (Neill & Medina, 2019, pg. 3). Here, where new research is normalizing variance in child development, the linear format of tests can rate performance and development incorrectly, and can mask the true level of understanding a child has reached. Second is test reliability. When making tests, it appears as if it is forgotten that there is more than one type of reliability. Neill & Medina (2019) note that, when testing reliability in standardized tests, test publishers typically focus on internal reliability. Consistency over time, which is a more accurate marker of reliability, is rarely examined. Third, is test Validity (Content Validity, Criterion Validity and Construct Validity). Once again, standardized tests rarely meet all three forms of validity, and when they do, they give rise to the question of “whether the test is more valid than teachers’ judgment” (Neill & Medina, 2019). Construct validity is also of concern, especially in the case of reading and writing; some claim that the tests only test for skill and not understanding.

Fourth, the tests also seem to be limited by bias. Where some argue test scores reflect inequalities in school, others argue that they “compound them” (Neill & Medina, 2019, pg. 691). Researchers have found that tests are tailored for middle or upper-class whites. The former, by default, puts low-income and minority communities at a disadvantage; the language used in writing up tests seldom incorporates “non-standard dialects” used by immigrant or non-Caucasian populations and examples to tend to be those that belong to the dominant culture (Neill & Medina, 2019, pg. 691). Further, what happens when the bias tests are used as promotional systems, is that school systems seem to become active markers of discrimination. In the United States, it is found that minority groups that are at a disadvantage in the face of standardized tests are typically the groups that are subjected to a dumbed-down curriculum. These results tend to be even more devastating in primary school settings, ultimately setting a child up for failure and inferiority for the rest of their educational career.

Last, in the realm of faults for state-enforced tests, is that standardized tests force many instructors to teach for/to the test alone. Entire curriculums can be planned around provincial or state exams, and by extension can take away from the process of learning (Neill & Medina, 2019; Haney & Madaus, 1989). This focus on basic academic skills takes away from the holistic nature of school, where alongside academics, children develop “personal, intellectual and social skills” (Haney & Madaus, 1989). Ultimately, as the focus on standardized testing increases, focus on critical thinking decreases. It is no longer about understanding and innovation and is instead it is about recognition and recall. Now, were the exams high in validity, active markers of critical thinking and unaffected by race, ethnicity and family income, all the aforementioned might not be a problem, but as this is not the case, some changes need to be made.

One alternative for standardized testing is a performance-based assessment. Here, depending on the subject matter, instructors will look at whether the outcome for the lesson or class has been met (ERIC, 1989). This approach is a criterion-referenced approach as opposed to a norm-referenced approach. Specifically, this mode of assessment, instead of placing the child’s score beside other scores, looks at the extent of mastery of the skill (appendix a). Performance-based learning looks at both one’s ability to know the material (recall, identify, list, match), as well use it (analyze, compare, classify and evaluate) (Hibbard et al. 1996).

Another alternative to the standardized testing approach is the Multiple Intelligence (MI), or the Learning for Understanding (LfU) approach. The approach is based predominantly on Howard Gardener’s theory of multiple intelligences, which highlights that “when it comes to being smart, differences count” (Dias-Lefebre, 2004). The MI approach incorporates various intelligence from the MI theory, for it takes into consideration the fact that not all children learn and process material the same way. MI provides students with options that pick up on different intelligences, and creativity tends to be highly rewarded. Learning options in this approach can range from acting/roleplaying to traditional testing. Here, rubrics will vary and be just as creative as the learning strategy. Note, that despite the tumultuous nature of examination and grading, the key factors looked at will be (a) creativity and imagination, (b)demonstration and performance, (c)organization and format, (d) reflection and metacognition and finally (e)evidence of understanding (Dias-Lefebre, 2004).

Ultimately, it’s apparent that standardized testing has become a big part of education and assessment and has deviated quite far from its roots. Note that Binet was never interested in comparing intelligences or using tests as a primary medium of assessment. Standardized tests were simply designed to identify students that needed help and nothing more. Accordingly, there is not doubt that standardized tests serve a purpose in the educational field, but their excessive use and bias nature seems to have gotten in the way of educators creating knowledgeable and creative critical thinkers. In the near future, a multi-faceted approach to assessment is warranted. What works for one educational domain doesn’t necessarily work for another, and the same holds true for students.

Standardized Testing: A Blessing and a Curse. (2021, Mar 19). Retrieved from https://studymoose.com/standardized-testing-a-blessing-and-a-curse-essay 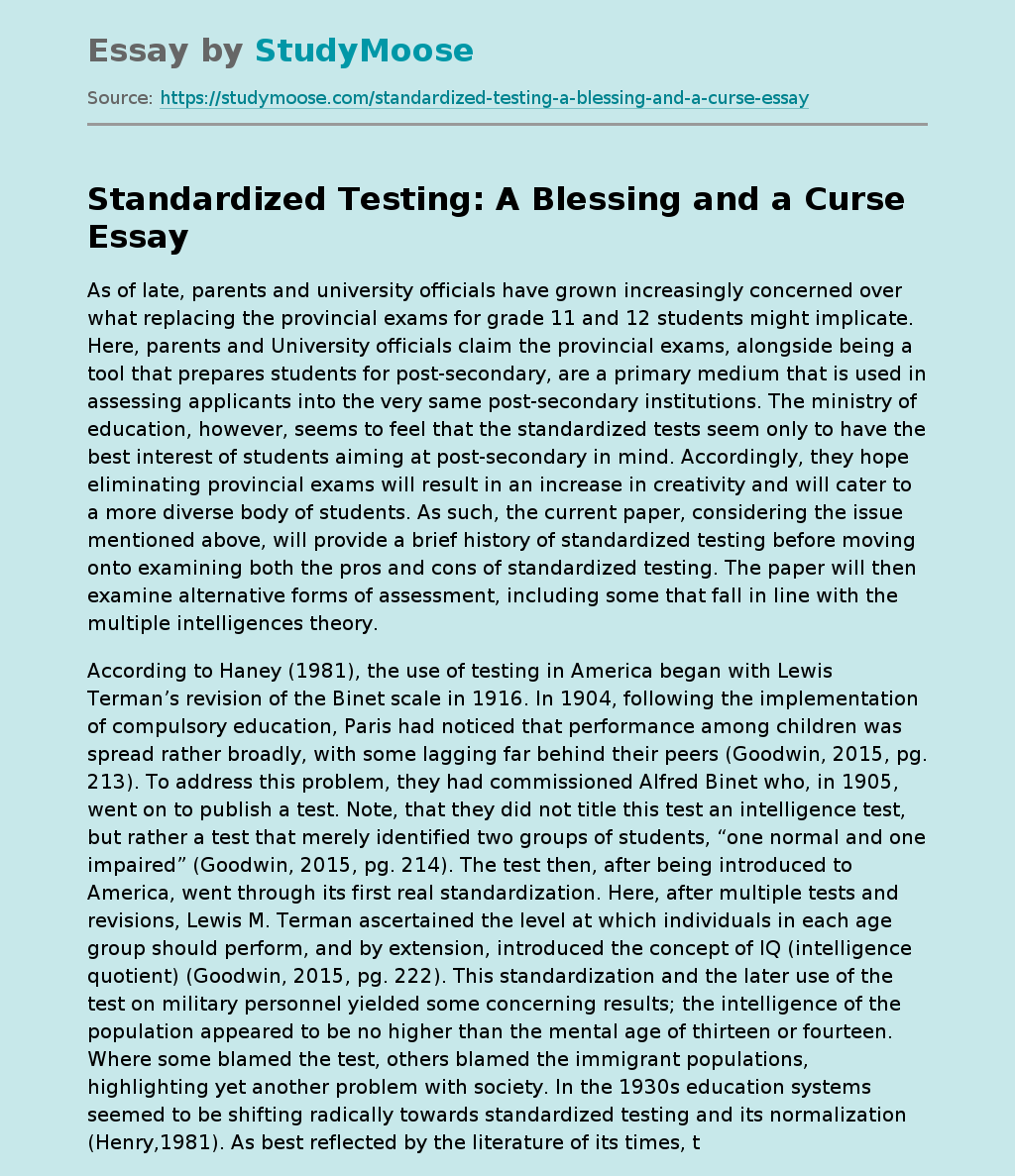